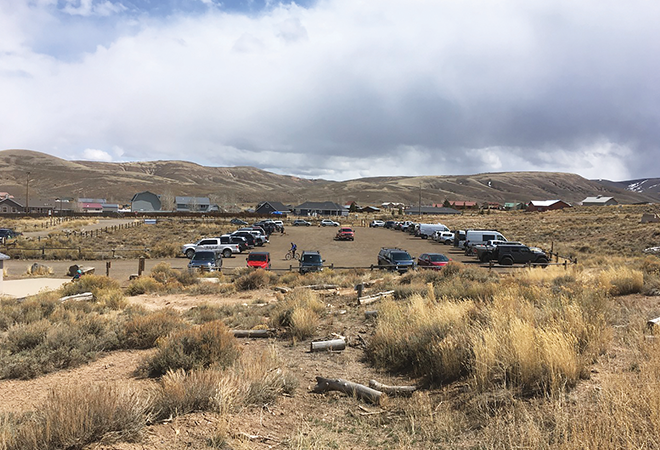 Spring is opening up the options but closures are in place

Living in a county with millions of acres of public lands provides a certain escape that not everyone in the world dealing with the COVID-19 crisis can appreciate. But because of the public health orders for social distancing, the area trailheads are getting pounded.

The issue came to a quick head when it was announced that Hartman Rocks, a popular hiking and biking area near Gunnison, was opening 10 days ago. People were seen riding in groups and having end-of-the-day beers on the back of their trucks. This went against public health orders and caused a stir within the community. It seems to have gotten much better.

“As expected, opening weekend at Hartman Rocks on Thursday, March 26 was a busy one,” said Gunnison Trails executive director Tim Kugler. “Both the base area and McCabe’s trailheads were packed all weekend with cars and trails users. The city, county, BLM and Gunnison Trails all received a lot of observations of current health regulations being broken—everything from large group rides, people hanging out and tailgating at the trailheads, groups gathering at trail intersections.

“While there are still plenty of reports of large groups riding together and busy lots,” Kugler continued, “both myself and the BLM had eyes out there this past weekend. While the parking lots were busy, most folks were parking and getting out on the trails quickly. Sounds like the McCabe’s trailhead still had some tailgating going on. The trails closest to the trailheads are busy, but once you start to get farther into the system, people spread out and you’re less likely to see many people.”

Kugler said that after the initial frenzy opening weekend, people seemed to get the message about how serious the situation remains.

“While still busy out there,” Kugler explained, “the majority of trail users appear to be respecting the current guidelines for recreating responsibly,” solo or only with people you live with, passing and yielding with good distance between individuals, limiting time at trailheads, riding within one’s limits.

Kugler observed, “I’ve never seen so many bikers on Gold Basin Road riding out to the trails, which is awesome. There are still large groups of five to 10 people out there riding together, and that’s been a problem, given the current circumstances. Aside from the obvious dangers due to the need to physically distance, it’s also fairly inconsiderate to other trail users who are following the rules.”

The north end of the valley is dealing with snow and, while people are still going to trailheads to ski, it won’t be long before bikes start appearing at the some of the trails and not just climbing Gothic Road or valley drainages.

“For trails on our end it is very slim pickings and only what you can ride when things are frozen,” said Crested Butte Mountain Bike Association executive director Dave Ochs.

“In regard to trail behavior in the new reality, I have to say there is a bright side,” Ochs said. “Users on the trails do seem to be giving more room, they are a bit more patient and generally there is a lot less conflict in the regular ‘user’ protocol. Folks see each other coming, they are getting out of the way earlier, for whomever it’s easier for, and it’s just more chill out there. Despite the shenanigans there for a bit, it seems all I’ve spoken to have witnessed that. Along those lines, if there is more riding from home and less driving going on, there is a chance in all of this for the Earth itself to get a break from the impacts of mankind. The sun still rises and sets, and it’s still beautiful out there, just slower—which is not so bad.”

Durant said, “It will be some time before we start promoting trail access on conservation lands, but in the near term we’ll be focusing on sharing tried and true mud season activities like a stroll on Peanut Lake Road or the Rec Path once it’s plowed and melted out. We are planning for a whole new suite of wayfinding and use signs for Long Lake come summer season, and there will be more efforts on river education and management, but both of those are another month or two out before these are in place.”

The Gunnison National Forest also has restrictions in place. “As far as general recreation on the Grand Mesa, Uncompahgre and Gunnison [GMUG] National Forest is concerned, we currently have a developed recreation site closure in place for the entire forest,” said spokesperson Kim Phillips. “All GMUG campgrounds and visitor centers, as well as many trailheads and picnic areas, are seasonally closed and will remain in that state indefinitely. The infrastructure is closed, but not the forest area or parking lots.

“This management action intends to protect public health and safety and align with state and local measures already in place to contain the COVID-19 outbreak,” Phillips continued. “Safe and responsible use of forests and grasslands will reduce impacts to local communities who may be at risk from COVID-19. Closures will be in effect until April 30, 2020, at which point they will be re-evaluated. Temporary closure of these sites will discourage dispersed recreation use by reducing congregation at trailheads, facilities and parking lots.”

There are about 7.5 miles of campus trails behind Western Colorado University that are currently open. These trails are on WCU property, so they sit outside of the BLM-managed portion of the Signal Peak trail system, and thus outside the seasonal and wildlife closures.

The Signal Peak area on BLM has a few different restrictions in place right now—one area closure closed to all use from March 15 to May 15, and another closure on all trails in the system to bikes and motorized from January 1 to April 30 for wintering big game.

For up-to-date information, go to: https://gunnisontrails.org/spring-trail-closures/.

Kugler also noted that the roads are closed currently at Hartman Rocks, restricting camping there.

Ochs said for the north end of the valley, it is still a long way before the trails melt out enough to ride. “I will say that I do expect a busy summer season,” he said. “When this all clears up, I think our open spaces and national forests are going to be rather busy this season, both from the standpoint of people perhaps having less spending money so they may be looking to dispersed camping, as well as people just being excited to get back to normal and enjoy a fun summer outside—away from the ‘stay at home’ orders. We are planning for a busy Crested Butte Conservation Corps season in regard to those concerns, and looking forward to helping wherever we can.”