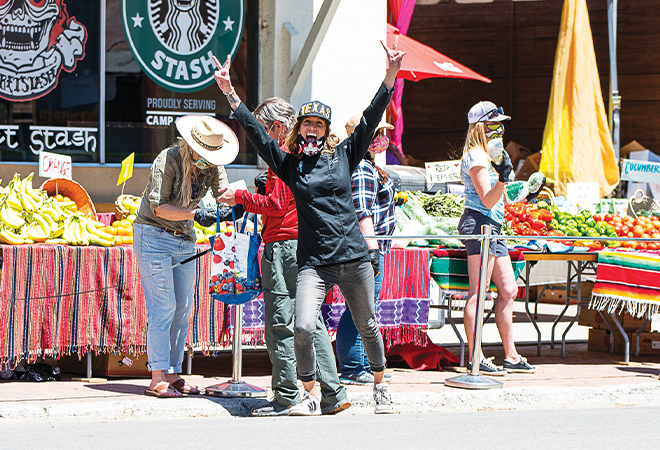 It’s all about relationships

Every Saturday for the last four weeks, the sidewalk in front of the Secret Stash restaurant at Third and Elk has been lined with colorful fruits and vegetables that will be given away for free. A line begins to form at about 11:30 a.m. and by noon last Saturday the line stretched around the Crested Butte Heritage Museum and over to Maroon Avenue by the Union Congregational Church. Some people waited almost two-and-a-half hours to get a bag of fresh food.

“I have received all sorts of feedback,” said Kyleena Falzone of the Stash and Bonez. “Most of it has been great but some people don’t like it and others have had a lot of questions. People should know that we are doing this to help feed the people during a strange time in Crested Butte.”

So Kyleena, who has no shortage of energy, wanted to make it clear she is not making big money off the weekly Farmers Market. “I don’t make a single penny on the market,” she emphasized. Using last week as an example she said there were five major donors along with many more who gave money, product or services for the market. The major donors gave more than $1,000 and others pitched in between $10 and the $1,000. She estimates each market costs about $7,000 to put on and she puts in money from her restaurants to help make it work. Ten of her staff along with about 10 additional volunteers worked the market. And working the market is not just showing up Saturday. It takes days of effort to pull off.

“We had about 450 cases of food to organize,” she said. “We start planning early in the week and it takes a lot of time to organize. It is a massive undertaking. I use the donations to add to what Shamrock (the primary food distributor) gives us. We support Shamrock as well because they’ve been with us for 18 years and are a family-run business. I also spent $1,000 for example with the Sherpa Café to provide food. We paid for coffee and dog food and organic produce through local businesses to include in the market. Some of the donor money is spent supporting local businesses and they in turn pay their employees and circulate the money in the valley.”

Any food left over after the last people in line go through the farmers market on Saturday afternoon gets donated to the Gunnison Country Food Pantry. Last Saturday, 256 individuals went through the line with the longest one waiting in line two hours and 28 minutes.

Kyleena emphasized that when the health orders closing restaurants were put in place she didn’t want to wait on government bailouts to see how much money she would get. “I had to be creative and innovative and I’ve worked every day since this thing started,” she said. “Over the 18 years I’ve been running the restaurants in Crested Butte we’ve developed great relationships with some of our customers and they are excited to give back through this and the pizza and taco kits we give away each night to those in need. We’ve done it 45 days in a row. Relationships are what is driving this and allowing people to get free fresh food on Saturdays. I figure if they can get free food here they might have some more disposable income to spend at other local restaurants and businesses in town. I had to be innovative and creative to make this work and get some cash flow in to pay people. We can’t do volume any more so we need to think differently.”

The free pizza kits and farmers market is not the only new idea she is pursuing. She has started shipping her pizzas around the country and she, along with some friends, are beginning the process of forming a new non-profit to help raise money for other worthy causes.

“I knew something good would come out of this pandemic and this non-profit is one of those things,” she said. “We will be raising money for organizations in need. And not just here but around the world. We want to support and raise money for causes we believe in.”

After seeing the support she has received from customers located around the world, Kyleena and her husband Eric saw an opportunity to use those relationships to keep helping those in need. “People believe in what I’m trying to do and they trust we’ll make good decisions with what to do with their contributions,” she explained. “This new non-profit is a chance to do good on a much larger scale.”

Kyleena and Eric are very fired up to expand the giving and to be supporting causes in need indefinitely. They have been touched by the connections that became evident with customers as a result of the efforts made in the last two months. “People like to stay in touch with this place and the restaurants and that’s why the Facebook posts work so well. Donors really feel a part of the community. By expanding this idea we all can do good work not only here but around the world.”

The fifth Farmers Market will be held this Saturday.