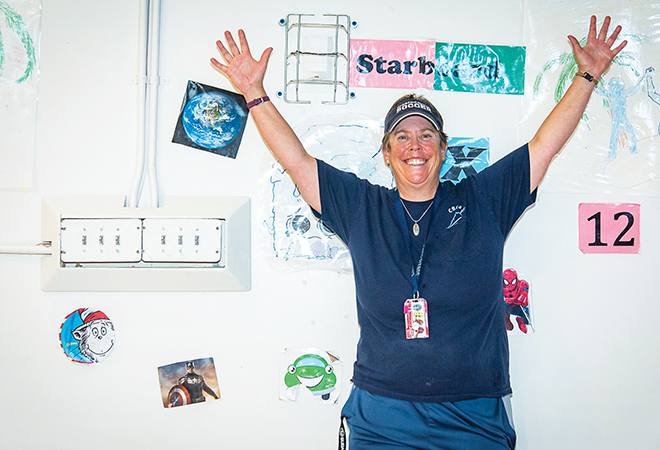 It’s probably safe to say that there’s not a single teacher in the entire country who has climbed on top of an alligator and held its jaws tight in front of a class on an overnight field trip. But Sandy Robinson has, and then some.

Now Sandy has wrapped up 31 years of teaching, 20 years of which were spent teaching physical education (PE),  though she prefers to call it “character education.”

“The key that I have held onto all of these years is, you can be the best athlete in the world, but that doesn’t make you a great person,” says Sandy. “I never taught traditional sports. I never felt that it was my job to make them into jocks. Just give them the tools to choose whatever they wanted to do.”

My PE teacher in elementary school, as I am sure most of yours in the 40-something to 50-something age range, was a guy, cheesy mustache, tight shorts, polyester short-sleeved polo shirt and a whistle around his neck. His curriculum was pretty straightforward: dodgeball, capture the flag, dodgeball, gym bowling, dodgeball, crab soccer, dodgeball, pegboard, rope climb and… dodgeball. Shots to the head not only counted, they were borderline encouraged. The year culminated with Field Day complete with standing broad jump, long jump, 50-yard dash, 4×50-yard relay and, of course, an end of the day outdoor dodgeball free-for-all. Kids cried, kids bled, some cheered and only the strong survived. Essentially it was a day to express feats of strength and speed where only the strongest could thrive.

Sandy’s Field Days involve water, lots and lots of water. Cones, hoops and other assorted tools of her trade were strewn about the field in a variety of challenges where creativity, character and teamwork were equally as important as strength and speed to succeed.

Sandy studied elementary education at Western State College and worked as a student teacher with Melissa Leftwich. She, along with Susan Hoffman, were the first aides ever hired by the Crested Butte school in 1989 when the school was only kindergarten through fifth grade and in the building that is now home to KBUT.

“They needed help but didn’t want to hire a full-time teacher,” explains Sandy.

She then took on a variety of jobs at the school, which soon expanded to kindergarten through eighth grade, filling in for teachers on sabbatical or maternity leave and joining Joyce Lamb to take on any other duties that needed to be done in and around the school.

“Those were kind of sucko days,” admits Sandy.

Her career nearly ended before it could even start as she applied unsuccessfully for several elementary teaching positions.

“I didn’t get them and thought about leaving education but in hindsight, it was a good thing,” says Sandy.

In addition to coaching middle school volleyball, soccer, basketball and track, Sandy also worked as an aide for then-PE teacher Rick “Coach” Parsons. Parsons retired and Sandy’s next 20 years in education were set into motion as she was hired to fill the position.

“It was sheer luck that Rick retired at an opportune time,” says Sandy.

In her 31 years as a teacher she’s seen five different principals, been on 25 or more trips to the Great Sand Dunes with the eighth grade class (the brainchild of Carol Kastning), helped organize the junior ski patrol program and eventually took over the ski for PE program from Nancy Vogel when Nancy retired. Just to name a few of the many things she did.

Once the Crested Butte Community School expanded to include high school and moved into its current location, Sandy then expanded her role from elementary/middle school PE teacher to K-12 PE teacher, a time she recalls fondly.

“I loved watching the kids grow from kindergarten to 12th grade,” says Sandy.

And the kids did too as she was often called upon to speak at their senior dinner. She moved through the valley as a “rock star,” according to her husband, Terry, because whether she is walking down the street or skiing on the hill, kids of all ages, including alumni, flock to her or shout out her name when they see her.

The last 10 years have been tough as the school continued to grow. Sandy feels that sometimes the “struggle between quality and quantity” is tiring but her students always provided a respite.

“You have to focus on the kids and you can get through it,” explains Sandy. “Adapt and change and keep things interesting.”

And while growth put the strain on Sandy’s favorite extra-curricular activities such as the sand dunes trip, the ski for PE program and the annual senior dinner, she believes one thing remains constant among all of the changes.

“Anyone in that building will do anything, at any time, for any child,” says Sandy.

But the time came for Sandy to call it a career and she does it with a heavy heart but a clear conscience.

“Terry is older and retired in 2007 so I’d like to go do more stuff with him during the school year,” says Sandy. “I’m also still young enough that I can go do something else, career-wise, if I want.”

And while she says she has no intention of returning to the school in any official capacity, Sandy has offered to do a cameo spot in the lunchroom and still has to help the new PE teacher transition into the role. Furthermore, her final year didn’t end at all like she had hoped or expected, as COVID-19 ended Sandy’s face-to-face time with the kids before she could say goodbye.

“I still need some closure with the kids,” says Sandy. “I didn’t have the chance to say goodbye, or as I like to say, see you later.”

Share
Previous Mask on / Mask off… And don’t use the term “defund the police”
Next Community Calendar: Thursday, June 11–Wednesday, June 17