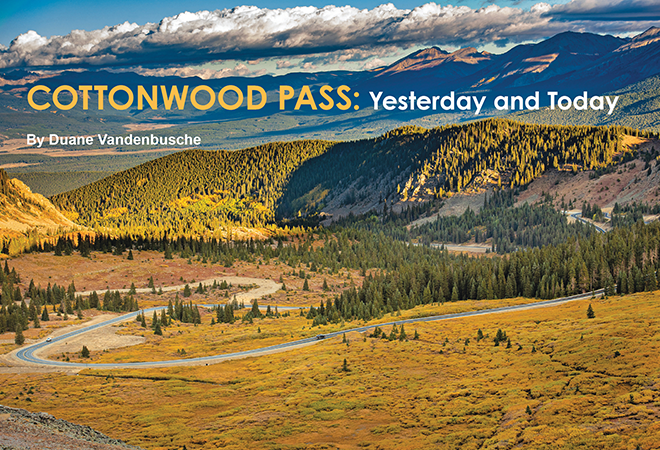 Dave Wood was tired. In 1877, the great freighter of Western Colorado and his 50-man crew had built the first rough road into Taylor Park and Gunnison County, one year after Colorado became a state.

Trails existed from the Arkansas River on the Eastern Slope to Taylor Park on the Western Slope, but this was the first road one could take a wagon over. One could make it with mules pulling the wagons. The road allowed men to follow others like Jim Taylor and Fred Lottis, who had come to Taylor Park over Lake Pass at the north end of the park in the early 1860s. Dave Wood named the pass Cottonwood for the many trees of the same name that dotted the area.

He went on to become the greatest freighter Western Colorado ever had, carrying supplies into mining camps and hauling ore out with burros or mule-drawn wagons. Once, on Cottonwood Pass road, a young woman met him and his wagons and asked, “Have you been in these parts long?” Wood eyed her with contemptuous disdain and replied, “Madam, I hauled these mountains in here.”

The Cottonwood Pass road was fearsome. It ascended 4,218 feet from Buena Vista to 12,126 feet on top of the pass. Then it descended nearly 14 miles into Taylor Park, dropping 2,618 feet.

Dave Wood’s road down the west side of the pass ran straight with no switchbacks and was very steep. It took four mules straining to pull a loaded wagon up the pass and, going down, drivers had to be on the brake constantly. Cottonwood Pass in the early years was open, usually mid-June to late October. Mud and snow kept the road closed for more than half of the year.

Cottonwood Pass brought many miners into Taylor Park in the late 1870s and 1880s and there the road split, one ran north over Taylor Pass into the booming silver camp of Aspen, and the other ran over Cumberland Pass to Pitkin and the Gunnison Country. Miners came from California Gulch (later Leadville), Granite and Buena Vista, a trip that took several days.

When the mining boom came to an end in the 1890s, the Cottonwood Pass road deteriorated with practically no traffic—it was just an old wagon road with enough room for the width of two wheels of a wagon. The U.S. Forest Service owned much of the land around Cottonwood Pass, and in 1956 decided to harvest timber on the west side of the Divide. The plan was to take timber over the pass down the east side to a railroad connection at Buena Vista. However, the road on the west side was terrible with no gravel—just dirt and rocks.

Engineer Mo Barz of the Forest Service was put in charge of laying out the new road. Barz, with two college students as sides, spent two summers on the layout and used ribbon flagging. Barz used an eye level gauge on the new route which ran north of the old road on the upper seven miles.

Ernie Nesbitt of Gunnison was then put in charge of following the ribbon flagged survey. Nesbitt and 12 Western State College students took two years to complete the work. They put in 59,136 wooden construction stakes, 18 inches high and pounded six inches into the ground to mark the road. They were 50 feet apart and covered 13.9 miles to the top of the pass. As Nesbitt put it: “That’s a hell of a lot of pounding.”

Work on the road began in 1958 with separate crews working from the top and bottom of the pass. The road was finished the following year and in September of 1959 a grand opening was held on top of the pass. When completed, the road had the least grade (4%) of any road over the Continental Divide. For the first time, vehicles could cross the pass.

By 2017, the federal government and Gunnison County decided it was time to pave the west side of Cottonwood Pass. The government would pay $23.7 million and the county $1.184 million. The new road would be safer and, with no mag chloride used and better water control, it would be good for the environment. The 18.1 miles from Buena Vista to the top of the pass was already paved and a repaving was done in 2019.

The United Construction Company began work with a 100-person crew on the 13.9 miles down the west side to Taylor Park in 2017. Workers dealt with a big snow winter of 2018-19, clay under the roadbed and water everywhere. Road base and asphalt adding up to 75,000 and 40,000 tons were spread on the road.

The pavement is 24 feet wide (the old road was 14 feet) with six feet of non-pavement on each side of the road. To handle water, 162 culverts and 30 curves were put in, along with two viewpoints that were built at the 5-mile and 12-mile marks on the road. Because some switchbacks were taken out, the distance of the road from the top of the pass to Taylor Park was reduced from 13.9 miles to 12.5 miles. The steepest grade on the road is 9 percent on a short section near the top.

Fifty-four people, including Ernie Nesbitt, were at the grand opening on top of the pass on September 7, 2019, and three days later the road opened. Traffic over the pass, which averaged 1,144 vehicles a day in 2015, was expected to increase by about 300 a day.

Today, Cottonwood Pass is unique. It is traditionally open from Memorial Day to November 1 and is one of the most beautiful and spectacular passes in the United States. In addition, it is the highest paved pass over the Continental Divide in the nation at 12,126 feet, beating Independence Pass by 31 feet.

There it stands—Cottonwood Pass—a giant among giants.