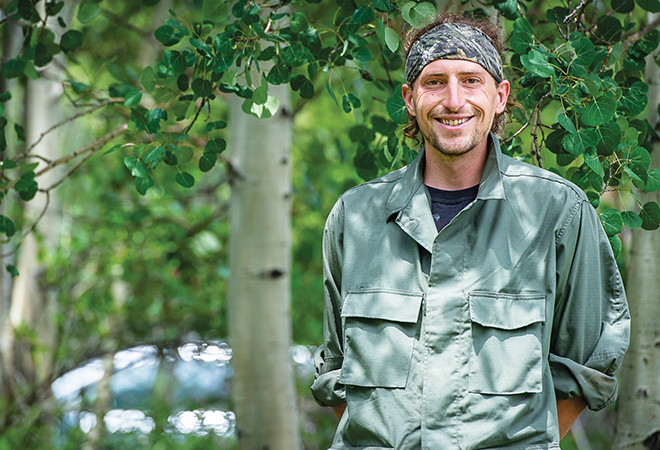 Digging into the Crested Butte roots

He sits in the garden, looking as natural as the flowers he’s surrounded by. Alex Theaker speaks as passionately about sustainable agriculture and naturally enhancing the soil with microbes as one would about a powder day or an epic bike ride. He’s a Crested Butte native son, born and raised here by his parents, Mert Theaker and the much loved, late Diane Theaker, known to locals as Diner.

“I loved growing up here,” Alex smiles. “We played outdoors all day. It was great being outside with your friends and back then it was so laid back. We’d make forts and ride our bikes around. I grew up skateboarding. The park was built just after I started but there used to be a vertical ramp on Belleview,” he says of living the life of a Crested Butte child. Alex started working at an early age, picking up trash for the town when he was in fourth grade, working as a dishwasher at the Slogar a bit later and in high school he got into landscaping and helping on construction sites as a laborer.

Alex confesses that he wasn’t in love with the institution of high school but he adds, “As far as growing up here and the experience of it, I feel fortunate.” He finished his required credits a semester early and spent the rest of his senior year on the slopes doing what he had always wanted to do—snowboarding every day. It was then that he met his wife to-be, Tori Walls, who was a freshman enrolled at Western Colorado University (WCU). For a while, he was an electrician apprentice but when the recession of 2008 hit, worked dried up. Luckily, it was a great snow year for snowboarding. Alex graduated from Crested Butte Community School in 2009 and says, “I had no clue as to what I wanted to do after graduation but I knew I wasn’t passionate enough about any one thing to go to school for it.”

Alex was shoveling snow in winter and in summer landscaping with Holt Loeffler in 2009. Tori was working at the Tobacconist but when she became sick and they discovered the cause was massive black mold under the carpet in their rented condo, they packed up and moved to Tori’s hometown, Wilmington, Delaware. “We really didn’t have anywhere to go,” Alex recalls. “It was the middle of winter and a bad time to find a place in Crested Butte.”

He had never lived anywhere other than Crested Butte and Wilmington was an exciting change but also a complete culture shock. “There’s a lot of crime and poverty, the sides of America you wouldn’t see in Crested Butte. I was working on wealthy estates, landscaping with Tori’s uncle. There are a lot of corporations headquartered there and there’s a lot of money.” He notes that the socio-culture was especially contrasted just driving 10 minutes out of the city. “These people have more than you can imagine,” he said. The couple would house-sit for one of their landscaping clients. “One of the perks was to stay at their mansion with all its toys. They’d leave us food and wine. We’re pretty simple so it was nice to get away from the city and see all the stars in the night sky.”

After four years of living the city life, in autumn 2013 Alex and Tori decided it was time to head back to the mountains. “We were ready for a change. I started working construction and property management for other people,” he said of his homecoming. Those jobs led to his acquiring his own accounts for management and the following year, he and Tori formed their own partnership, The Maintenance Company, LLC, a full-service property maintenance business that encompasses everything from cleaning, landscaping and snow removal to full kitchen and bath remodels.

Last year in March 2019, while shoveling snow at one of his management properties, over five feet of heavy wet snow sitting atop an ice sheet slid off the second story roof above where Alex was working. He had heard it break loose and he ran, but the force of the slab pushed him into the walkway, completely burying him. “I was conscious for a while and did all the avalanche survival techniques,” he says. He tried to make an air tunnel but the snow kept falling in on him, “so I just had to lay there.” He was buried for two and a half hours. When he didn’t show up to pick up his wife, who was shoveling at another property, she called his parents. His dad saw the slide and Alex’s shovel and started digging immediately. They uncovered him under six feet of snow. “I came to in the hospital. It was a very close call. I was far gone when they got to me,” he says. “I didn’t think I was going to survive. I had made peace with my death.”

But now Alex embraces life, and gardening has been one avenue for that.

Alex’s favorite aspect of his business is the soil nutrient program, which is based on an ancient Korean natural farming technique. “Master Cho came up with the method based on a natural, sustainable farming method. At its center is cultivating indigenous microorganisms, or IMOs, and building healthy soil for your gardening and lawn care. We’re starting to get into the farming aspect, working with Mountain Roots Food Project, teaching them about the methods we’ve been learning. Just recently we came across a natural, organic pesticide and fungicide, one you can make at home, created by the son of Master Cho. What we’re focusing on is the soil nutrients and its health. Our goal is to work with other companies and organizations, whether it’s to teach people to do it themselves or to give them the ingredients to have their people apply or to have us come in to do the work for them. It’s meant to be a really accessible, low-cost system,” he explains, relating that healthy soil is an overlooked aspect and solution in the environmental issues that we’re facing.

“The microorganisms can clean toxic soil. The IMOs are raised in wheat bran. It’s part of the process of culturing them and growing them to be strong and diverse—if you collect microbes in a drought, it’ll help your plants in drought conditions and the same thing goes for collecting them during a frost. If you get microbes when it’s cold out, it’ll help your plants with frost tolerance.”

Alex feels that nature has a lot of answers for us, noting, “We can harness the power of nature to make a real change in the world and our personal lives.”

Alex and Tori recently bought 40 acres just outside of Gunnison, where they want to build a sustainable farm to raise food for themselves and, they hope, for others in need. Alex points out that during this pandemic, we’ve witnessed the food chain supply quickly break down.

Alex sums up, “Being self-sustainable is one of my ultimate goals, being able to build a community where we rely on each other instead of the big system and things we rely on now. The way everything is set up, if that breaks down we’re not going to have food, gas and everything we currently rely on, especially here in the place we live. It’s a perfect warning and the reason we need to reexamine the direction were heading as a society. Start simplifying things and looking to nature, especially here–we’re kind of like at the end of the road. I want to bring back the roots of the community I grew up in.”