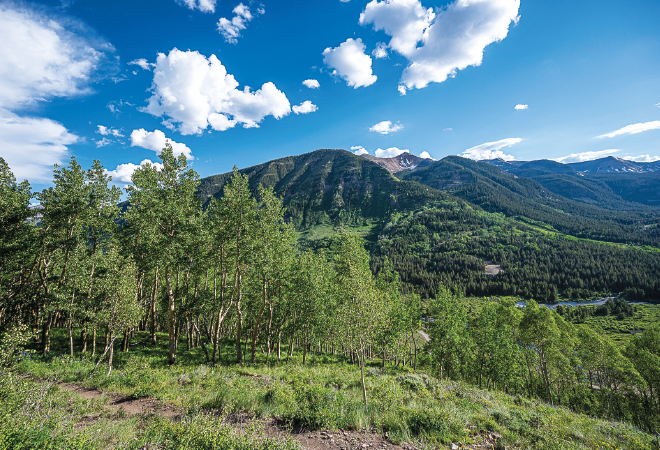 I didn’t see it but it sounds like the unofficial after-party of the unofficial Chainless Race last Friday apparently felt like a street party in Rio during Carnival. I’m both sorry and glad I missed it.

Normally, for the Fourth of July issue I would write about the patriotism of peaceful protest, of the importance of voting or the wisdom and courage of the country’s founding fathers. All important topics but in 2020, things are not normal. No, we are living in interesting times and watching the ramifications of a deadly pandemic. That is simply not normal.

I don’t know about you but I’m getting a little tired of the “interesting” in these times. As I was walking around Elk Avenue this week it was obvious that many business owners are walking the edge. Being ordered to close their doors in the middle of March when spring breakers flood here to ski and spend money hamstrung our economy. If that pesky COVID-19 would have swept through the valley a few weeks later, the local economy might not have even noticed the virus. After all, that period of time from the end of March, through most of May is called “off-season” for a reason.

But the virus had no such manners and we got clobbered both economically and health-wise. Six of our friends and neighbors died from the virus. That woke us up. Several of our friends and neighbors caught a bad case of the bug and to this day are struggling with debilitating after-effects that have hobbled their healthy selves, without a timeline for complete recovery. That is scary.

Today we struggle with how to deal with the coronavirus that for the most part appears to be taking a nap. It may be napping but it is still there, as evidenced by a few positive test results that weren’t around a month ago. Meanwhile, tons of people are suddenly feeling symptoms and getting tested. Many might be having a hard time breathing because of allergies. Others might have a cough because of a summer cold. Everyone is watching as places that opened up before us, Texas and Florida for example, are dealing with a major resurgence of the virus. That probably adds to stress for many people here.

As the valley fills with visitors, striking the balance between stoking the economy and keeping our “at-risk” population safe is a tricky tightrope. County healthcare officials are doing a really good job of walking that tightrope. Keeping a close eye on numbers, the healthcare officials have worked to prepare for a real resurgence. They know how to expand hospital beds if needed. They developed a color-coded “Coronameter” to keep people informed of how close we are to being in the danger zone. At the same time they are supporting things like allowing a significant number of people outside (right now at 175 but asking the state for 250). There has no doubt been some action that would be done differently in hindsight (let’s not go to the infamous postcard) but for the most part, Gunnison County has been at the forefront of a successful mitigation of the COVID-19 crisis.

Which leads us to cause and effect; action and consequence; controlling destiny; karma.

While public health officials laid out the direction, it was the community that for the most part chose to go in that direction. The community deserves credit for where we are today as opposed to, say, in Houston, where ICU beds are almost all full this week. And while we at the end of the road don’t normally like to be told what to do, we are also not a community of fools. So when the logic of social distancing, masks for those who are able and better hygiene is explained we hop on it to protect not just ourselves and our families but our neighbors and the local businesses we appreciate.

While it appears the younger demographic is a tad less interested in social distancing (they are a younger demographic, after all), the community as a whole needs to not simply stop doing the good things that got us here. I like the openness and vitality the businesses are offering. I like seeing friends again for a cocktail. I like understanding that wearing a mask inside crowded places might help keep workers getting a paycheck.

Being human, we could not expect these measures to last forever. There will be slip-ups and there will be times we just choose to throw caution to the wind. The genuine smiles from those doing the Chainless last week were great. It was a blow off steam sort of thing. And having done the Chainless Race, there are few better events for social distancing—during the actual event. It is actually a quiet trip down Kebler with people extremely spread out for the most part. The pre-party? Not so much. The after-party? Definitely not. And while I was not there, the photos of Second and Elk show that social distancing was definitely not the norm Friday evening and the demographics were, shall we say, mixed.

So that is where our community actions and consequences come in. It is where we made a choice for our destiny. From what I read, being outside is a lot safer and has a greater impact on slowing the spread of the virus than being inside for a shoulder-to-shoulder concert or party. But it is not fail-safe. So a chunk of the community threw some caution to the wind before and after last Friday’s Chainless. I understand the attraction. We are all human and riding a bike in a clever costume with a locked chain down a mountain pass into the main street of town is our communal sort of Crested Butte’s human-ness. Hopefully our karma is such that we will see no corona consequence 10 days from now.

Look, I have no desire to play mean dad on this but most of us like our businesses having their doors open so they can generate revenue, so please stay socially distanced. Most of us like seeing kids romping in the playground and hope they can return to their physical classrooms in August, so please keep washing your hands. Most of us enjoy meeting friends in person rather than on a Zoom call, so please wear a mask if able. Now is not the time to throw all caution to the wind and go all Rio Carnival beach party. It remains the time to protect ourselves and our entire community. It’s hard. It also might keep a friend from literally dying. All actions have consequences. Karma happens here too. We will get what we deserve after all.