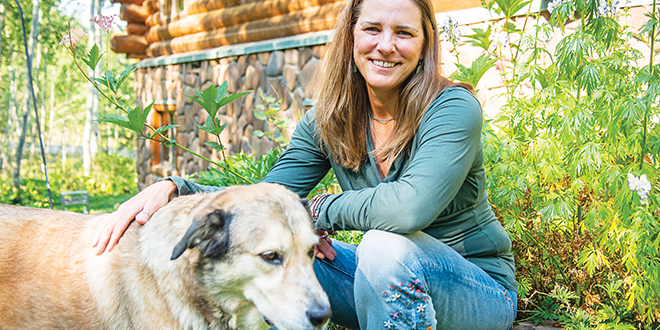 Home in the Woods

Andie Holman knew immediately that this is where she’s supposed to be. “I always felt better in nature,” she smiles, sitting in her log home surrounded by a dense grove of aspens. Her life has been woven with two constant themes, nature and helping others. Andie was originally from West Virginia, and when her parents split, her mother moved back home to Bermuda when Andie was seven. “I was quite distraught because I really liked the Appalachian forest. I was a woods girl.” She adjusted to the flora of her island town, Paget Parish, in the center of the tiny island of Bermuda. “It’s the third-most remote place on the planet, far from another metro area. We’re really isolated,” Andie says.

“I was always a solitary kid,” Andie says. “I’d go out and sit in the garden and squeeze the snapdragons to make them talk to each other. When I was growing up we had a large garden and mom would say, go out and pick dinner.” Andie recalls the story she heard about her grandmother being told she couldn’t be a doctor because it was unbecoming to a lady, which resonated with Andie and shaped her own future, “I was always interested in healing and how it all worked.”

To get to school, Andie would take the morning ferry across Hamilton Harbor, a 10-minute ride. As an island child, she’d be on the beach swimming with her dogs. Her summer job as a teenager was working at the front desk and housekeeping at the family hotel. She began high school off the island at a boarding school in Pittsfield, Mass. where, again, she was at home in their deep forests. “I’d take my flute out into the woods and play. It just always felt better out there.” She took wilderness classes, and says, “Our teacher would take us out into the woods and taught us to rock climb, how to start fires, fire safety, first aid, plant and tree identification, environmental and land stewardship, with tons of hiking and canoeing. It stuck with me.” In the fall she played soccer and in the winter she skied. “It was like ice,” she says of the East Coast snow.

She graduated in 1986 and enrolled at the University of New Hampshire as an English major, “But I got off course because I found these anti-nuke activists, the Coalition for Disarmament and Peace, so I was getting on buses to go to protests in D.C. more than I was focusing on my school.” To get her education back on track Andie transferred to the University of Denver. During her summers off she trained as a diver and worked on a dive boat in Bermuda. Later, in her mid-twenties, she became a rescue diver, saying, “The most natural place I could be was under the water.”

In between her years in New Hampshire and Denver, Andie did a semester with the National Outdoor Leadership School (NOLS) spending three months in Alaska, outside of Anchorage. The first month entailed backpacking, then a month doing glacier work, and the final month was spent ocean kayaking in Prince William Sound, “with whales, seals and crazy birds all over. It was really life changing. Alaska is so huge and so wild. You’re out there thinking about all the things that can kill you and relying on each other to get through it. Alaska taught me that nature could rejuvenate me and that I needed it.”

Andie decided to study business at college in Denver, explaining, “because the family business was hospitality. I knew that even if I didn’t go into it, I needed to understand it.”

She spent weekends skiing and hiking and graduated with a BS/BA in 1991, landing a very prestigious job at the Ritz Carlton in Boston in their management trainee program. That lasted only a few months before she realized it just wasn’t right for her. “You have to love the service industry. You’re working when everyone else is on holiday, always having to be very pleasant, and the guest is always right. I’m standing there in my spiked heels and pencil skirt and I grew up as hippie girl in long skirts, moccasins, feather earrings, following the Dead around. I remember thinking, this is not who I am.”

Following a boyfriend to Michigan who was attending college, Andie was working two part-time jobs at different health food stores. Within a year, she was manager of one of them. During this time, she was also attending massage school at night. “That’s where I first learned about homeopathy. I had no idea what it was. I was completely blown away. I had never come across a system of medicine that depended on the individuality of the patient,” she says, but it would take her another four years before she moved to London in 1997 to study homeopathy in depth.

Andie’s research into homeopathy actually began when she was a 15-year-old with eczema. “The doctor wanted to treat me with harsh drugs, steroids, which would destroy my health, but they had nothing else.” At that point, she decided to try a diet change. “I trusted the natural remedies,” Andie says.

She became a detective, taking note of what she ate, when she itched and what made it better or worse. “I didn’t finally fix it until I found homeopathy. Homeopathy works with the physical and emotions, looking for a connection between the two. What the patient says is of utmost importance. Homeopathy originated in Germany and it’s still huge in India and Europe. It’s still one of the primary methods of medicine and it was well established,” Andie says.

She became an eczema guru in London. “You pay attention when someone’s in distress so you can help bring it to light.” When she finished the three-year studies, she decided to stay in London. She had met her future hubby, Mark Holman, during a summer between classes working in Bermuda in 1995 and he followed her to London. She graduated from the College of Homeopathy in 2000 and they decided to stay since she had clientele.

Andie began working at London Bridge Hospital for the oncology department, founding a complementary therapies team. “We worked two different areas, a chemo day unit,” a free service that allowed patients to receive a massage, facial, homeopathy, nutrition and reflexology. They also had a palliative care floor, hospice, “where you’re the midwife for the other side, and if you look at it like that, it’s easier.” That philosophy helped her do that job for 12 years, during which, she received a second Bachelor of Science degree in nutritional medicine.

On weekends they’d hop in their Mini Cooper and explore the country. “The gardens of England are off the charts glorious because it’s so wet. There’s so much ancient history. If we weren’t roaming the English countryside, we’d hop on a cheap flight, so we saw a lot of Europe. Mark’s an EU citizen so we could have gone anywhere,” but she says, when they got to Colorado, it felt right.

In 2012, they moved to the mountains above Boulder on Sugarloaf Road. “After 12 years of working in cancer, with Mark working in finance, we decided to take a break and became volunteer fire fighters, Emergency Medical Responders for Sugarloaf.”

Andie began writing her book, Love Your Scar, based on her work at the London hospital, and says, “I had a lot of breast cancer patients. I taught them post-operative care and how to take care of themselves and their scars through nutrition, massage, deep breathing and emotional release.”

After 17 rainy years in England, and about six years in Boulder, the couple decided to move to Crested Butte after friends suggested it. “You can get lost in the woods in Crested Butte,” Andie smiles. From her home in the forest, she consults with clients via phone, Zoom and Skype, especially since COVID-19 hit. She still conducts home visits.

“I want to educate people so that they eventually don’t need me, so they can learn how their bodies work and what their triggers are. They become self-sufficient in their own healing because I’m just the guide but their body does the healing work. I help them figure out how to turn on their own immunity. We’re all built able to heal ourselves, we have an immune system, we all have an inherent healer inside us. In London, I had the pleasure of working with some of the finest cancer doctors. The oncologist can surgically remove the cancer but they needed me to teach the patient how to do self-care. The London clinic was integrated with different kinds of therapies and medical practitioners working together for the patients’ benefit.”

For more information about Andie’s homeopathy practice go to Andieholman.com and check out her YouTube videos.