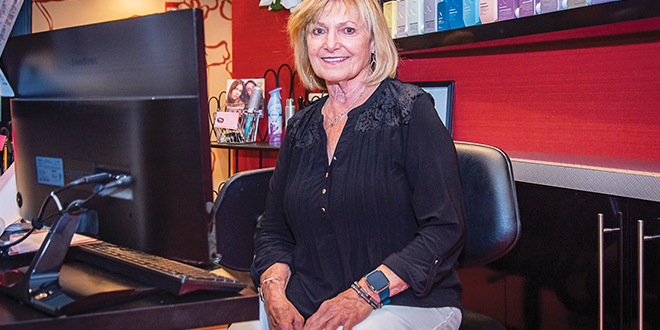 Penni Ervin was born in the same city where See’s Candy started, by Griffith Park, considered part of Los Angeles. “It was a huge park south of L.A. where everybody went to hike, bike and go to the L.A. Zoo,” she says. Raised in North Hollywood, Penni moved with her family to Tarzana when she was 10.

Even as a child in grammar school, Penni was very social. “I loved to paint and draw. In high school, I was a thespian, into drama and art,” she says, and laughs that she was a valley girl before there was ever even a valley girl. After she graduated in 1960, she enrolled at Pierce College. “I wanted to be an interior designer but then I met the head of the ski club at college, Guy Ervin.” They married 1961 and their eldest son, Christian, was born a short time later. Guy worked for Atomics International, so they moved around the valley. In 1963 their daughter Kelly was born and in 1965 their son Erik, aka Turbo, came along.

With three kids at home, Penni began styling hair for her neighbors in her home. “I couldn’t go back to school because I was raising kids,” she says. So when her hubby graduated, he’d watch the kids at night while she attended cosmetology school, earning her license in 1969. “I went to a lot of hair shows and did a lot of competitions,” she recalls, winning awards at many of those competitions. “I went to work in a salon in Tarzana called House of Vienna, owned by a couple of men from Austria who had just won the Hair World Olympics.”

When her marriage ended in 1971, she left Tarzana, moved to Woodland Hills and rented her own booth in another salon. “The gal who owned the salon was friends with Paul Mitchell,” she says. Mitchell was the famous hairdresser with his own line of hair products. Penni got to meet him at a hair show in New York City. “We flew to NYC and stayed with him. I was a hair model for him at a show,” she says of her then-new Dorothy Hamill hairdo in 1975. “We were wined and dined at Studio 54. We’d go out every night because, you know, NYC doesn’t close.” It was a sparkly, glamorous experience for her. “I was single,” she smiles; however, she met her second husband when she returned to the valley after the show, and he inspired her to open her own salon in 1976.

Penni named her new Woodland Hills salon Penelope and Friends, “because that’s my name. It was funky. All four stations were antique sideboards and barber chairs. We sold jewelry because every salon back then did. Most of the hair products back then were developed in the valley.”

As she created her own clientele, her business was booming in 1980 to the point that she decided to build a new salon in Agoura Hills, where she was living. Her kids named the new salon Grand Allusions, inspired by the Styx Grand Illusion album, but with a play on the word. The new, larger building had an esthetician in a private room, two nail technicians, a makeup artist and eight stations.

In 1984, after she split from her marriage, she and daughter Kelly took off for Europe for a month, traveling through eight countries. “We started in London and bought a Eurail pass. We sent all of our jeans back home because they would never dry,” so they bought fast-drying clothes there that they could hand-wash and dry overnight. “Then we’d pack and get the next train to the next destination. We were in Germany for Oktoberfest. We went to all the galleries in every country because Kelly was an art major and getting credit for the trip.”

When Penni returned from her European adventure, she discovered her salon manager had left for another salon, taking three of her hairdressers. She decided to put the salon on the market, sold it and later returned to work for the Viennese stylists she had trained under.

On a trip to the Bahamas in 1985, she met John Gioscia, who worked booking ski tours into Crested Butte, and he convinced her to visit. Penni arrived that Fourth of July. “The parade had only five floats. Alan Cox drove his Cadillac and Joe Fitzpatrick and Mickey Cooper were the Mayor Brothers. I called my daughter and said, I’m moving.” Her daughter reminded Penni of her desire to move to Italy, so she returned to California. However she wound up moving to Jackson Hole, while her daughter, who had then discovered Crested Butte, decided to move here.

Penni finally moved to Crested Butte in 1988 and Turbo followed in 1989. She worked for Henrietta’s salon, As You Like It, before opening her own salon in 1991, Main Street Hair, which she had until 2004.

Penni had started a wedding planning business in 1999, Weddings in the Rockies. “No one was doing weddings when I started. Instead, everybody was getting their real estate license. I didn’t even know what a wedding planner was. I was doing hair for all these brides coming to Crested Butte who had a hard time planning their wedding.”

She took a course with the Association of Bridal Consultants, a worldwide organization. “Tracey Hastings and I started the wedding council to get more people involved because there are so many aspects to it—lodging, photography, florists, caterers, entertainment, clergy, hair, makeup, luncheons, videography, venues, transportation, welcome bags, guest activities—it encompasses just about everything you can think of. It’s hard work. I didn’t realize what I was getting into until I got into it.”

After successfully planning five weddings, Penni decided to shut down the salon because the wedding industry was taking more of her time but, “I still had a clientele so I worked at The Cut Above for a year,” she says. Penni later took over the Elevé salon at Elevation on the mountain because, “I couldn’t just rely on a few weddings to make an income.”

All that changed when Crested Butte became a true wedding destination.

Recently, Penni has decided it’s time for retirement, saying, “It got to be too much. I’ve done like 90 weddings, engagements and proposals. I’d like to travel more,” she says, citing Greece and the Greek islands as her top destinations. As part of having more time, she’d also like to begin painting again and wants to volunteer for various organizations, especially PAWS.