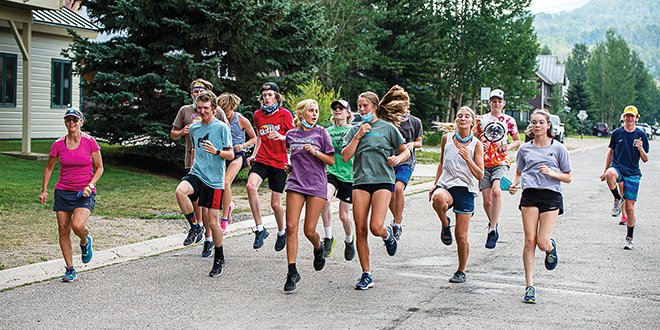 While all high school contact fall sports such as football and soccer were postponed to the spring season for COVID reasons, cross-country was given the green light to proceed and the Crested Butte Titans are poised for a solid showing.

Granted, there are some tweaks to the cross-country season to accommodate COVID protocols at the state level and right here in Crested Butte.

“There are some changes and it will be a different season but we’re grateful for what we get,” says coach Laura Puckett Daniels.

The cross-country team opened the pre-season on August 10 and Daniels, co-coach Shari Sullivan-Marshall and assistant coach Vince Rogers remain cognizant of their roles as coaches in the COVID era. And while excitement for the upcoming season is somewhat tempered given that a COVID surge at the start of school could stop cross-country in its tracks, there’s still a lot to look forward to.

Last season, Titans’ cross-country had between 10 and 12 runners total; they were young and focused on training for the future. It turns out, the future is now as the team has 23 runners on the roster so far and may grow even more.

While the cancellation of other sports brought in some runners, Daniels credits the strength in numbers to some Nordic ski racers joining the fray as well as the energy growing for cross-country.

“It’s a little bit of COVID but a lot of it is from momentum building around the program,” says Daniels.

And it’s not just quantity that has the coaches excited for the season. It’s also the quality of athletes. While there is a big crew of freshmen coming in who have a lot of work ahead of them to get used to high school cross-country and running five-kilometer races, the team has three returning seniors in Logan Utz, Myles Cress and Yvon Michel.

Furthermore, the team looks to get a massive push from their junior class with their top runner from last year, Porter Washburn, ready for another stellar season; Sam Merck bringing the energy to the girls team; along with Nordic racer turned runner Ruby Pendy and transfer student Connor Williams from Nashville, Tenn., who happens to be the grandson of former Crested Butte mayor Leah Williams.

“They didn’t really have a team in Nashville where he lived, so he’s excited to be part of a team,” says Daniels.

Not only that, but Williams has been training under a private coach in Tennessee for several years and is on course to make it to Nike Nationals, posting times in five-kilometer races that rival the top times in Colorado across all high schools.

With a big slew of freshmen and runners such as Williams all on the same team, the coaching staff is forced to alter training once again. Last year, they instigated a training regimen that worked well with their smaller team of fairly evenly talented runners. This year poses another new set of challenges.

“It’s a bigger spread of abilities this year so our training needs to be multi-tiered,” explains Daniels. “We need to be more flexible in our training to reach everyone’s goals.”

With a week and a half of workouts under their belts and runners still trickling in, Daniels believes “everything looks good” so far.

The biggest issue is a lack of training time with the shortened season and the reduction in races and racer participation. The Titans open their season in Alamosa on September 4 and have two more meets scheduled before they jump into regionals on October 9 and then the state championships on October 17.

“With such a short season it’s hard to get in those base miles,” says Daniels. “We just decided to stick to a limited schedule and make sure we find some JV meets. We may still pick up some scrimmages or smaller dual meets but that’s yet to be determined.”

Ultimately, Daniels feels the Titans could very well be carrying on into the post-season in some fashion, barring any interruption or cancellation due to COVID.

“I think because we have returning seniors, returning juniors and our new transfer student we’re poised to do well,” says Daniels. “But we know everything could change on a dime.”