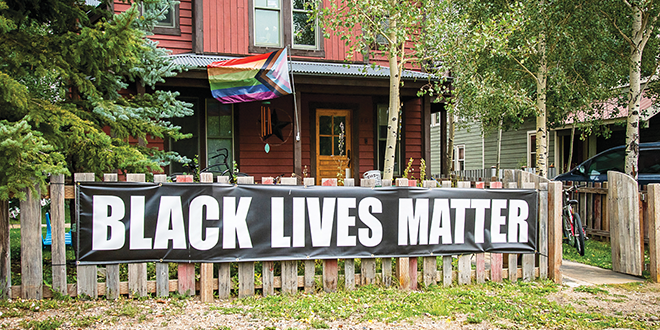 Sometime after this week’s fall snow melts and before the winter season snow arrives, the town of Crested Butte will paint a Black Lives Matter mural at the intersection of Elk Avenue and Third Street.

After three hours of sometimes emotional discussion, the Crested Butte Town Council unanimously agreed Tuesday to move ahead with support for the Crested Butte Black Lives Matter Committee, including agreeing to put a BLM mural on Elk Avenue, and considering an official proclamation at the next meeting that the town rejects racism. The council also encouraged the half dozen Black Lives Matter subcommittees to continue meeting to refine some of their action item recommendations.

Mayor Jim Schmidt noted that council had received a huge amount of email on the topic, with the vast majority in favor of BLM support. He said there were four or five emails opposing the painting of Elk Avenue.

One of the leaders of the Crested Butte BLM Committee, Chloe Bowman, explained that the idea was for the town “to show support for a part of the community that currently feels unsafe and unwelcome. We are asking the town of Crested Butte to acknowledge what is happening nationally outside of this bubble and support those living here.”

Another leader of the local movement, Karen Hoskin, said, “It is exhausting for people of color of our community and we are trying to lend them support in the process. There are more Black residents here than most people see and we want to amplify their voices and make sure they are heard. This movement is not divisive, it is unifying to so many people. We have the opportunity to do really beautiful things right now as a community. It is conveying a message that hurts no one but makes the Black residents of the valley so valued.”

With more than 50 people taking part in the Zoom council meeting, many wanted to share their thoughts. Peter Viets said painting Elk Avenue would show that the community is on the vanguard of civil rights and equal protection. “It is important for the community to express support,” he said.

Susan Sweetra said the work being done was “fabulous” but noted that in this time of a pandemic, the financial aspect should be considered as part of any action.

Malia Jones said, considering that Crested Butte is a Creative Arts District, having a mural painted on Elk Avenue would be appropriate. “We have an opportunity as pretty much a white enclave to put out our hand to welcome everyone. It would say we are working to fix the disparity.”

Arvin Ramgoolam agreed. “We are shoring up our identity as a town that has been in flux the last few years, especially with Vail buying the ski area. It underlines who we are,” he said.

“It is a way for the community to express ourselves through art,” added Mary Boddington, “to show we have compassion for everyone.”

Council member Mona Merrill said she has no doubt Crested Butte wanted to be open for everyone but she was not ready for a quick approval. “I’m not confident we have heard from the entire community. It feels like more of the community could be pulled in if they weren’t aware of these discussions taking place. I feel it is a very difficult subject and some council members like Will and Mallika have had more time with it.”

Council member Mallika Magner said the identity of the town was at stake. “We pride ourselves on being a good, liberal, progressive community,” she said. “I’m proud the town is coming together to engage in this deep conversation and proud that council and staff are making this a priority.”

“If I weren’t on council I wouldn’t have the amount of education I’ve received on the issue in the last month,” said council member Chris Haver. “This is a tough conversation. I realize certain things need a little time to figure out.”

Council member Candice Bradley said it was obvious to her the community “strongly supports the actions and recommendations that came out of the subcommittees.”

“We’ve had 45 e-mails with about three against this,” noted council member Will Dujardin. “We had a petition submitted with hundreds of people living in the 81224 zip code. We have a lot of the community saying they want us to take action. When we as a privileged white council say we need to take more time, it literally triggers trauma for some of our community members. We have a chance to be leaders in our community. We are so far behind on the topic. There are recent examples of overt racism in our community. I’m hearing the council say they support doing this, but when will we vote from the heart and show the community we stand up for what we believe in?”

“It breaks my heart when I hear about racial slurs being used in this town. It is appalling to me,” said Schmidt, who suggested the council proceed with the proclamation and some subcommittee recommendations like having the council and staff take diversity training. He said the most important action is to vote out Donald Trump as president.

Local BLM leader Zibula Nunu expressed frustration at the direction the discussion was taking about delaying a vote on the issue. “I’d like to remind you the reason you formed the subcommittees was to get input. We’ve told you what we’d like done. We did that,” she said. “You say you want to carry on with the work when we give you these things you asked for. Can you please just make up your minds?”

Hoskin said many of the people of color were having a hard time being told they hadn’t done enough work. She said the council should act with what they could, given their parameters.

“It is time to stop dithering and show support for the community,” added Ashley UpChurch. “We’ve had enough committees.”

Dujardin moved for the council to support the continued work of the subcommittees. He then moved to have the council consider a proclamation at the next meeting stating its opposition to racism. Both passed 7-0.

The council then continued the discussion over painting Elk Avenue specifically. Bradley immediately moved to paint the street. Town manager Dara MacDonald asked for some specifics such as design and location. She emphasized the town should pay for and be responsible for the mural.

Town attorney Barbara Green told the council that legally, the government could say something on its property without opening the forum to everyone. “If you turn the street into a public forum then you can’t regulate the content,” she said. “It is much safer the more control the town exercises on its property.”

Merrill said there might be better locations and alternative mural opportunities that could make a larger impact.

Haver echoed her concerns and said, “It is important we can all stand behind what this means,” Haver said.

Schmidt and Mitchell also felt a more permanent installation would be better. Magner said she would prefer a mural that wouldn’t be driven on “but I want to see Black Lives Matter emblazoned somewhere.”

“I think we can do something louder and bolder than it being on the street,” said Merrill.

“This is about supporting people in this community who are affected by the issue every day,” stated Kyle Anderson. “If we are truly listening, you’d be acting on what you are being told by the people affected by this daily. There’s only one right side to this and I don’t want to be in a community that is racist.”

But ultimately, the council decided to vote on Bradley’s motion. Merrill was the first to be asked the question and after hesitating she voted to approve the motion to paint Black Lives Matter on Elk Avenue. The rest of the council followed suit. Staff will begin designing the mural to be painted on the street once weather permits this fall.