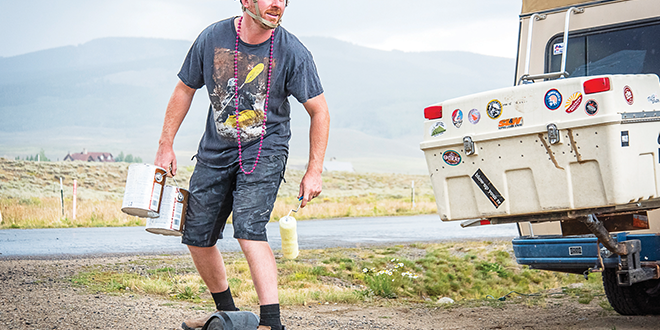 Amid blue metal panels of multi-colored blinking buttons, switches and flashing lights of enormous machines that seem to have been transported from the set of the original Star Trek, Brian Carney is part of the team of superheros who control the drinking water quality for Mt. Crested Butte. He moved here three years ago and swears, “I never owned a pair of skis or a snowboard until seventh grade, when I got my first snowboard. I still snowboard to this day,” a big factor in his move to the north end of the valley.

Brian grew up in Arvada, where his dad was a airline mechanic for United and his mom was an elementary school nurse. Throughout school days, he played a lot of sports, like roller hockey and basketball. “As a teen, I spent a lot of time coming up to the Roaring Fork Valley to visit my uncle, aunt and cousins. I’d spend every summer in Basalt, inner-tubing and just getting on the river quite a bit,” he recalls. His uncle owned a painting company that put him to work painting. On days off, “We’d take the boat out on Ruedi Reservoir, wakeboarding and water skiing.”

In high school, Brian played football and baseball, ran track and pole vaulted. “I wasn’t the fastest so I didn’t win any races,” he says of his short-lived track career, “But no one wanted to pole vault so I just started doing it. I wasn’t good at it, if you’re talking technique. If you’re doing it correctly, the pole will bend and fling you over the bar but I would just run and do a double death spin and I would get over it. The highest I got was nine feet, five inches but if you’re good you’re doing like 14 feet,” he laughs. However, he excelled at football, which earned him a scholarship at Western State College (now Western Colorado University) in 2007. He says, “I had no idea what I was going to do and the only reason I went to college was because I had a scholarship to play football.”

He arrived with his parents during a recruiting weekend, and says, “We went out partying until 3 a.m. with a bunch of the football kids. The next day, I smelled like a classic brewery and looked like hell when I met with the coaches.” However, they apparently figured Brian would fit right in and gave him the scholarship. “It was winter and it was so cold,” he remembers his first frigid reality in Gunnison. “There’s no valley that’s colder than Gunnison, but it was the only school that gave me a scholarship.” It took him a year before he came to the conclusion, “This is the best place.”

Unfortunately, two months into playing football, before regular season even started, a skateboard accident changed Brian’s course. “I was longboarding past Taylor Hall and a dude rode in front of me on his skateboard. I was cruising down that hill at maybe 25 mph and we collided. I remember being about four feet away from him and then I woke up in a Denver hospital.”

He was airlifted out of Gunnison after having seizures from a badly fractured skull and subdural hematoma. Back home from the hospital, Brian had to adjust to the healing process, and recalls, “Any lights would give me the most intense headache so I lived in my parents’ basement. I slept for 16 hours a day for the first two weeks.”

Once he was able to return to Gunnison for classes, Brian says, “I thought I would be so far behind missing two weeks of school but it could have been a lot worse. I had been failing all my classes and if this hadn’t happened, I would guarantee I would have dropped out but when I returned, almost all my teachers were supportive and I got good grades.” He was no longer able to play football, so instead he played on the club baseball team. Brian graduated from WSC in 2012 with a business degree with an emphasis in land and resource management and a minor in economics.

Having been told he could make good money in the oil industry, he set that as his goal. “My bro Bob was making a ton of money as a petroleum engineer, and I wanted to make a bunch of money and have a bunch of things too, because I’d been told that in the end, the man with the most things wins.”

He was hired as data entry for an oil company in Denver. “I was awful at it and it was the most boring job,” he confesses. “I don’t know how people do it. I was sitting there thinking, so this it, and then I’m old. I lasted for six months and I pretty much got fired. They called it ‘laid off’ but I was the only one who got laid off.”

So, he headed down to St. Croix in the Virgin Islands, where his aunt was living two blocks from the beach. “I’d get up and swim and snorkel every day. And I got certified in scuba diving.” When Brian got a call from another oil company, he took the job researching legal documents. “And that was horrible too. I left in a month. My brain doesn’t work like that,” he finally concluded.

Brian moved to Carbondale when his buddy offered a “super cool cheap place to live. I did a million jobs there. I got a job at the Limelight Hotel in Aspen as a bellman, while painting for my uncle and delivering Domino’s Pizza twice a week. So in a month’s time, I went from making really good money with the oil companies to delivering pizzas for Domino’s… but I was stoked,” he laughs. “I’d never been so happy. Just being outside was such a life change for me as opposed to being in a hellhole office.”

Ski season was under way and as a Limelight bellman, he also picked up guests from the airport. “I didn’t like the job but I’d go skiing during my four-hour break, just enough time to run Highlands Bowl.” After one season, he got a job in property management.

Brian had met his future wife, Christine Kelly, at WSC in 2009. She was the work-study librarian. “I couldn’t write a paper at all and I asked her to help me. She wrote the whole paper for me and it’s been sweet love ever since.” She had the legitimate job as a third grade teacher in Breckenridge so he moved there in 2015. Brian says, “I worked as a shuttle driver from Breck to DIA and back, driving the worst drive in Colorado on a daily basis, sitting in dead-stop traffic for eight hours on the weekends, but I could snowboard every day.”

He scored a summer job with the town of Breckenridge Parks and Recreation and snow plowing with the town in the winter. “I didn’t mind it. I was making way better money and boarding three days a week. But I ended up working at Breckenridge’s sewer treatment plant. Nobody thinks about what happens when you flush your toilet but there’s so much biological activity that breaks down the waste and it’s absolutely insane. It’s basically a biological reactor. It promotes intense bacteria life and growth, microorganisms that feed on the waste. It was mind-blowing. It was more like working at a laboratory. I loved it—it was awesome and amazing. I really loved working there but I saw a job opening at the waste water plant in Mt. Crested Butte.”

With his experience, he was hired in April 2017. When there was an opening at the water treatment plant, he decided to switch. “Every day is a new experience and challenge to figure out. We do so much stuff. We go back into the East River, behind Crested Butte Mountain Resort, with its breathtaking views. We’re getting a new pump house and a new pipeline and we’re getting a whole new water plant as well. The technology is mind-blowing. It’s state-of-the-art,” he says excitedly.

One of the main reasons Brian and Christine wanted to get out of Breckenridge was affordability. “There was no possible way to own a home or anything. A 400-square-foot studio apartment was $280,000 with $650 monthly HOA. It’s changing for sure here in Crested Butte. We were able to buy our condo in Buckhorn a year ago and since then similar condos have increased 20 percent. We feel lucky. This is perfect out here. There’s no place that I’ve been to like this. This is the most beautiful place. Coming up valley it’s like a wonderland.”

Share
Previous Summer Grand Traverse set for this weekend
Next DON’T CHICKEN OUT! 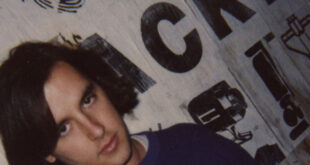 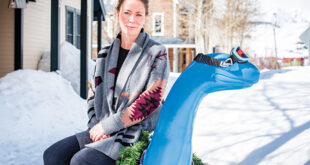 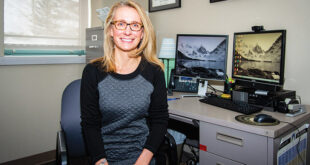 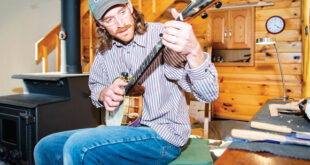