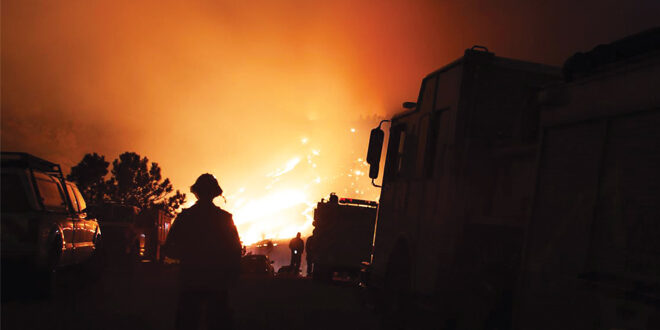 Four members of the Crested Butte Fire Protection District (CBFPD) recently offered their firefighting services to assist with mitigating the largest recorded wildfire in Colorado history, the Cameron Peak Fire in Larimer County, and are using the new experience as a learning tool for future opportunities back home in Crested Butte.

On September 17, the state sent out a surge resource request for the Cameron Peak fire, which essentially asks for as much manpower and equipment as possible over a 72-hour-period. At this point the Cameron Peak Fire had already been burning for about 63 days, said CBFPD chief operating officer Rob Weisbaum, and to date has burned approximately 208,663 acres in Larimer County.

The CBFPD sent a small crew to help with the request, having enough staff and volunteers to fill in for needs here in town. “Our number-one priority is making sure Crested Butte is covered,” said Weisbaum. “But they’re just looking for people to get out there and fortunately we had the apparatus to fill it and the personnel backfill.”

Weisbaum put together a four-person engine crew to help with the request, including Weisbaum as the task force leader, captain Corey Tibljas, lieutenant Taylor Reeves and FF/paramedic Jason Wagoner.

The turnaround was quick, noted Weisbaum. “We got the notification at noon, and 12:30 you’re on the road. You have to be self-sufficient and be able to survive on your own in a wilderness environment for three days.” The crew worked 16-hour days on the job, with eight hours of down-time.

Upon arrival, the Crested Butte team was tasked to work with fire district crews from Carbondale, Aspen, Manitou Springs, Severance, Windsor and Bennett. “Task Force 11, that was our team,” said Weisbaum. “Interestingly enough, we have never worked with them before so we had an opportunity to learn a lot from each other.”

Task Force 11’s first assignment was to do structure protection in the Red Canyon Ranch area by finding potential high-risk areas, cleaning out debris and making a defensible space around the fire area. This included sawing down trees close to residential areas and raking the ground to dirt to create a two-foot-wide buffer zone. The team was also tasked with checking for people who had not yet evacuated and were still occupying their homes, and making them aware of the fire risk.

On the third day, the crew mitigated the areas where the Forest Service burned, canvassing roughly 4,000 acres to make sure all the hot spots were out.

One memorable moment for the crew, Weisbaum said, was coming across a wild animal sanctuary ranch that happened to belong to a volunteer firefighter for the Poudre Fire Authority, and they ended up helping fill up the generator that ran for the animals’ housing. “We’re talking kangaroos, donkeys, camels, reindeer, you name it,” said Weisbaum.

While the CBFPD has sent out individual firefighters for resource deployments with greater partnering organizations before, this was its first deployment as far as an agency. “This is all new to us,” said Weisbaum, but he hopes for more collaborative opportunities like this one in the future. Currently, CBFPD FF/paramedic Joe Blunn is working on the East Troublesome Fire with the Greater Eagle Fire Protection District.

Cory Tibljas, the captain engine boss for the CBFPD Cameron Peak Fire crew, was happy the team could lend a hand. “It’s been a long-term goal of mine and of the district’s to be able to help out with surge resources like that,” he said. “Ultimately, if something of significant magnitude were to happen here, we’d be the beneficiary of countless others coming to help our community. So it’s huge that we can do our part as well.”

Tibljas noted that the district had also prepared a secondary team on standby this past week should the state put out another request. “The good news is it snowed a ton across the state and they’ve been able to demobilize a lot of the extra resources,” he said. “The risk has come down, and we’ll most likely not need a future surge order. And as far as Crested Butte, we’re over the hump for wildfire season,” he said.

The CBFPD is hoping to do more in the wildfire realm and is developing a wildland firefighting program, with the plan to have it up and running for next year’s wildfire season. “We’ve learned a lot in a very short amount of time and can spend this winter building up and preparing extra for next season,” said Tibljas.