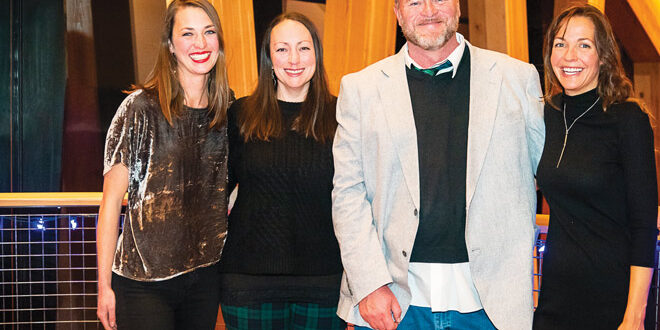 Center for The Arts emerges as a local hub during COVID

“We’ve come out of the gate completely recalibrated”

On any given day, the new Crested Butte Center for the Arts is host to yoga sessions, dance and art classes, gallery receptions, support group meetings, private projects and any number of other events and fundraisers. In some cases, these are even happening at the same time in the 31,000-square-foot facility. While that wasn’t exactly the vision when the newly built, $21 million Center opened shortly before COVID hit, it seems almost as natural now as if it had been planned all along. The biggest question for the Center as it looks ahead to 2021 is how to keep up with increasing demands.

The pandemic has made 2020 a challenging year for many families, small businesses and non-profits, but one of the most drastic effects many of us across the community have felt is the absence of large events and public gatherings. The absence of those seasonal mainstays like Alpenglow have meant the Center lost more than 90 percent of its anticipated revenue, even as it prepared to open and begin paying off a high price tag that was at times controversial within the community. Rather than closing its doors, however, the Center has mostly opened more of them, offering its large, well-ventilated spaces to other organizations so they could continue doing their own work.

COVID restrictions required the Center to close for three months last spring, and public health orders forced the Center to cancel most of its 2020 events, causing a major staff reduction. But once the Center cleared the public health hurdles in June to re-open in a limited capacity, a skeleton crew of three staff members—and eventually a fourth when new executive director Scott Palmer came on board—began orchestrating a vast network of groups and small events that needed a new home. That has become the new normal at the Center, and for now it is working.

Palmer came to Crested Butte in August from Sun Valley, Idaho to accept the position of executive director. He had more than 30 years of experience with non-profits prior to the Center, but admits none of those experiences included managing an organization during a global pandemic.

“What we’ve been talking about sort of since day one when I got here, is the fact that COVID has had a huge impact on this organization. We were forced to lay off staff, the budget went way down and obviously most of the events we planned had to be cancelled. And that leads people to believe that we’re really quiet, that we’re just sort of sitting here waiting for the pandemic to go away. Nothing could be further from the truth. The fact is, this building is packed with stuff almost every single day,” said Palmer in a recent interview.

The Center, one of the largest indoor spaces in Crested Butte, hosted 679 rental events from its reopening on June 9 through October 31, compared to 234 rentals in 2019.

“Just working with Public Health was an enormous push to get all our zones figured out, and to create the document that would allow us to get the clearance to continue to have programming,” said the Center’s literary arts director Brooke MacMillan. “Since that happened, it’s so nice to hear kids running through the halls. And almost all of our dance spaces have a waitlist at this point.”

“While rental revenue does not begin to make up for lost ticket revenue from typical offerings like large concerts and festivals, the Center is stepping into the role we envisioned as a hub for the community,” said Palmer.

Part of keeping the doors open has involved asking donors to give again in an emergency fundraising drive this spring—a major hurdle.

Jillian Liebl, the Center’s development director, said making those calls was difficult, but it did bring in around $300,000 to help stabilize operations.

“That really was such a measure of the faith that our donors had in the organization, and the care they had for us, that they were willing to help us bridge the gap. So many other organizations did a really fantastic job of COVID emergency funds, especially the Community Foundation,” said Liebl. Of course, there were also emergency government funds, as well as a $10,000 Colorado Creative Industries grant. “Those funds allowed the Center to not only continue to maintain our relationship with the bank at which we have loans, but also to keep the building open—and paying the bills.”

Liebl emphasized that, contrary to some perceptions, “We have so many local donors. Out of about 250 individual donors, at least half of those are locals.”

“We learned as an organization how to adapt virtually. We had a literary festival in August that we pivoted completely virtually and that ended up being very successful. So we were able to maneuver, and provide safe programming and continue our mission within these times,” reflects MacMillan.

The staff all spoke to how the Center was perhaps due for a recalibration within the community. “A really big goal of ours is to just work with other organizations. I think in the past there was a perception that we didn’t play fair, or that rates were really high, or it was difficult to work with the Center. And that could not be further from the case any longer. We’ve come out of the gate completely recalibrated to be community-minded. And the three of us are excited to come to work again,” said MacMillan, referring to herself, Liebl and associate director Melissa Mason.

“We’re also excited to work with some new organizations we hadn’t worked with before,” said Liebl, describing new ideas like art therapy and perhaps a science-based lecture series she hopes to create with Rocky Mountain Biological Laboratory.
There will also be a writer in residence program kicking off this spring, and the potential to be a touring location for the Denver Center for the Performing Arts shows. “Even in the midst of all this, it has given this organization a chance to take a breath for a second and think about how we want to be moving forward,” said Palmer.

Financial reset: treading cautiously
“It is incredibly difficult,” admits Palmer. “We are talking a 90 percent reduction in our earned revenue. Probably more. That’s a huge hit.”

The annual budget of the organization prior to the pandemic was projected at $2.4 million, and he predicts it will be in the $500,000 to $600,000 range. Despite that drop, he said they are working to constantly find new ways to fill spaces, even as they have agreed to dramatically lower the rent for other struggling organizations. The skeleton crew has prevailed, doing the work of what was once several additional people.

“And having the support of our town, the county and the flexibility of our partners has made all the difference,” said Liebl.
One of the first things Palmer did when he started was sit down with staff to work on the budget for the next fiscal year. “And I was probably more Scrooge than Santa,” he says. “But we now have a balanced budget.” He says he understands that people are worried, and the work is in proving, “We can save this giant building, but one of the ways we are going to prove that is to prove to our donors and our partners and the town that we can do math. And we’re savvy business people. And it’s working. We have embraced a new model of transparency and honesty,” says Palmer.

That new balance, however, does not currently include a budget for Alpenglow next year. For now, the Center is moving forward with plans for small events and classes, continued virtual programming, the popular poetry and wine series and its other safe programming achievable within the pandemic.

“We’re not taking Alpenglow off the table, we’re just not planning for it at this point,” said Palmer, noting that there is a large degree of uncertainty about how many people will be allowed to gather under 2021 public health restrictions. And as things (hopefully) open up to larger crowds again, the entire staff feels confident they can find the talent to fill a stage, no matter how late the hour.

The biggest challenge will be filling staff positions.
“We need to be able to hire back staff,” says Palmer. That includes technical staff, facility maintenance specialists, a special events crew and more general maintenance people. One exciting turn of events is that the Center did just hire a maintenance position, which relieves some of that burden.

The dance of how quickly to get the staff capacity will depend on how the budget increases, or not. The staff continues to shovel snow, clean up glitter after kids’ art classes and manage what they describe as an exciting, but exhausting, pace.
“For now, we will just keep the space bubbling along,” said MacMillan.