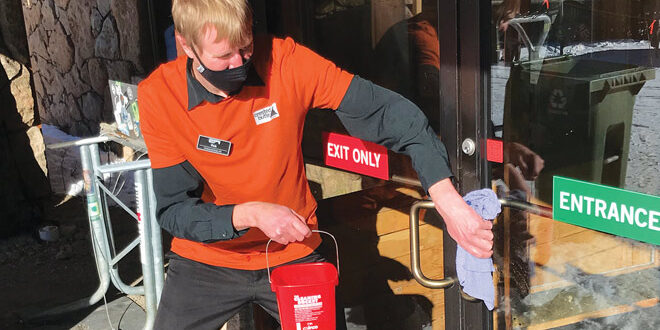 Observations of the hill in early season

I’ve been up three or four times since the lifts started spinning. It’s after Thanksgiving but before the first real big storm and before the big jets start flying in—both of which we’re still waiting on. It is shakedown cruise time. Running a ski area that drives the local economy during a pandemic is no easy task. With a few bumps that should have been expected, the CBMR team seems to be working it and working it pretty much as well as can be expected to keep those slopes open.

Sliding into the Red Lady Express line without a mask, I got a polite reminder from one of the lift ops to please pull up the buff. Walking into Paradise Warming House, I got to chat with the watchdogs—a couple of enthusiastic (it is early in the season) college-aged kids spending a gap season at a cool ski area. The ski patrol on duty congregated around the lift terminals. I saw CBMR VP and GM Tim Baker chatting up a line attendant asking how the day was going. “Pretty fine” was the reply. And it appeared that was indeed the case on a busy weekend day.

The lift lines are spaced to keep people away from one another. Skis and boards do that automatically front to back but the configuration now separates those next to you. Everyone in the lines I’ve been in has been willingly wearing a mask. I heard a couple instructors saying they hoped the vaccine kicked in soon for everyone because the idea of spending a long day on one of the magic carpets in a mask in the spring when it is sunny and 45 degrees was not something anyone was looking forward to experiencing.

But in these first few weeks of the new season, it seemed everyone was adhering to the new protocols and was just happy to be out there. Once Paradise opened and now with the Queen open the skiing has spread out. That’s good because early season skiing is fast. It’s all on man-made snow so the skiing down Ruby Chief and International are not slow. Get your edges sharpened and be ready to fly.

The reservation system, which naturally was an easy target for local pass holders to bash on (rightfully so in many cases), should get smoother since with more terrain there will be more spots open in the reservation queue. I saw a recent news story that as of last season the Epic and Ikon passes brought about a new change to the ski industry—more skiers and riders on the hill are there through season passes than through day tickets. The folks coming here for a week to ski Crested Butte probably purchased a season pass instead of even thinking about organizing day passes. The price and convenience adds up and leads to more people springing for a season pass.

It is amazing that it looks so much more like winter up there than on Elk Avenue. The mountain crew has done a phenomenal job putting out a good early season ski product. Riding the Paradise quad can get chilly in the afternoon when the sun sinks behind the ridge so don’t be fooled: It may feel like early spring at the post office but it feels like early winter as you cross into Paradise Bowl.

They’re doing what they can with what they’ve got. Yeah, the scent of hand sanitizer lingers. Yeah, I haven’t figured out how to stop my sunglasses from fogging up when I lift the mask over my nose. Yeah, I’m not sure who I can share a lift chair with. But it is working…

The CBMR owners and managers want that hill open every bit as much as you. They are doing what they can to keep it open. Face coverings are available everywhere. Socially distanced lines. Obvious traffic patterns in places like the Paradise Warming House. They know that some of the people that will be flying here from all over the country will carry COVID. We’ll be walking that razor’s edge. Of that there is no doubt.

But those in charge hope that separating people, enforcing a mask mandate, wiping down the door handles, counters and any other surface people touch, will help keep everyone who works and visits here safe. Because if it is not safe, it does not work and if it does not work, we’re screwed.

So from what I can see early on in this process, things aren’t perfect but they are working well. Keeping it going takes everyone chipping in—even those that think some of the requirements are foolish. Protect yourself, protect your neighbors and friends, protect those who are on the front lines working. Protect the economy. Protect the valley. It’s really not hard. If we all pay attention we can maybe get to the point where those instructors won’t be suffocating behind a mask on a magic carpet during a hot and sunny ski lesson in April. We can only hope—and more important, we can step up and do what we can.

Do your part to help keep those lifts spinning.