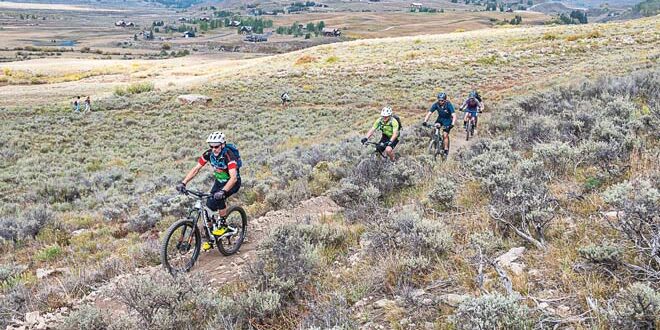 CBMBA gets STOR support on “Riders off the Road” trail plan

Waiting on larger projects in favor of compromise, connectivity, sustainability

Even deep winter doesn’t stop mountain bikers from dreaming of dirt. This winter the Crested Butte Mountain Bike Association has released a short-term proposal to keep up with increasing trail use across the Gunnison Valley as it manages trails getting a little too much love during non-winter seasons. The theme is outreach and compromise, and the hope is that the proposal will enter into the National Environmental Policy Act (NEPA) scoping process with the U.S. Forest Service/Gunnison Ranger District and secure further research.

The CBMBA short-term plan, called “Riders off the Road,” presents a five to eight year “roadmap” that includes 15 separate trail projects at all corners of the valley. Many of these projects would create parallel trails to replace or complement those already in existence; realign trails that are unsustainable; add new sections to link trails together; or create new access points to combine other amenities such as camping, parking or restrooms in one place.

The plan has been a work in progress since 2009 when CBMBA put together a long-term plan, which it revised in 2016. The short-term plan was first released in April 2019 and version 4.5 of it was released in December 2020.

“I like to say this is Version 372,” quipped CBMBA executive director Dave Ochs. “We have been working with stakeholders and revising this constantly for four years.”

Ochs describes trying to find a balance between the clear interests from recreationalists in more trails, conservationist interests in reducing impacts and sustaining wildlife habitat, rancher concerns in preserving their land uses and CBMBA commitments to maintain and improve what already exists while accommodating more users. Ochs says this proposal does that.

“It’s not necessarily a proposal about brand new trails, it’s about improving the existing network and providing better trail connectivity,” he said.

CBMBA removed from its short-term plan the Slate River parallel loop trail, East River trail, Gunnison to Crested Butte trail and connector from Washington Gulch to Slate-via the pre-existing Cloud City trail, among others. “We’ve recognized that now is not the time to ask for some of these,” he said. “Those proposed trails are very important to our mission, our constituency, and for better network connectivity, but current concerns for wildlife, existing/historic uses, impacts, and resource sustainability have sidelined them.” Each is still part of the long-term plan, for a later time.

CBMBA presented the newest proposal to the Gunnison County Sustainable Tourism and Outdoor Recreation Committee, and STOR supports 13 of the 15 proposed projects.

“The STOR Committee has endorsed all but two trails on CBMBA’s Riders off the Road proposal and supports the USFS considering the remainder of the trails for NEPA review and implementation,” confirmed Gunnison County community and economic development director Cathie Pagano. “The trails that the STOR Committee supported represent important connections and re-routes that make for a better and in many cases, safer user experience and address sustainability issues. The STOR Committee was formed to address these types of issues and proposals in a collaborative atmosphere with broad stakeholder input. Dave Ochs worked hard to incorporate diverse input into his plan and made modifications in some cases that the Committee supported. We applaud the hard work of CBMBA to bring these trails to fruition.”

Gunnison District ranger Matt McCombs also supports the process. “I committed to CBMBA to analyze their modified proposal if they could gain support from STOR. I see the group, with its broad representation, as the perfect place to assess ripeness (for formal planning via NEPA) for recreation related projects, especially if they’re community driven,” he said.

“I have moved the goalposts on Ochs more than once on this project, yet, in response CBMBA did an incredible job reaching out to the community as well as key stakeholders to refine their plan, and through dialogue with STOR members refined it further,” said McCombs.

The next step is for the USFS Gunnison district interdisciplinary team to consider the STOR endorsed proposal to see what alternatives come forward. McCombs estimated that the NEPA process could be in the public engagement phase mid-summer.

The biggest hurdle is perhaps #2 on the project list, a new Snodgrass Trail. Ochs recognizes that this is different from the rest of the pack—and it is not endorsed by the STOR committee.

“The number one request of our constituency is to find a way to keep Snodgrass open year-round. This one is ambitious. It would be a new, exciting downhill specific trail keeping users on public lands. However, we do realize there are a lot of concerns from the ranching and wildlife/sportsmen communities and this would require the full NEPA process,” he said.

CMBA is not trying to force any of these, emphasizes Ochs. “We’ve hosted open houses, public forums and been soliciting comments and feedback for years… the NEPA process would bring scientific studies and analysis, along with further public input allowing even more feedback and comments. This is a controversial proposal, and if CBMBA learns from credible data that there is critical habitat or sensitive resource concerns in a certain area, then we are not going to propose that trail. We are eager to enter the NEPA process so we can get to the real science, the real data,” he said.

The other project STOR did not endorse is #13, the Eccher Gulch/Granite Basin trail exit. Wildlife concerns and the fact that this trail is more isolated, accessed by a busy road, and not such a part of a network were reasons the STOR committee members did not endorse CBMBA’s plan for some re-routes and finding a proper exit (currently shut down due to private property). “CBMBA remains dedicated to working alongside the USFS to find that proper access,” says Ochs. CBMBA’s long-term vision includes bigger ideas and connectivity. But Ochs understands the pitfalls of overreaching.

“Some people wonder, ‘when is enough enough?’ But I keep going back to all these surveys showing trails are the number one [recreation] desire that people want addressed,” he says.

“CBMBA appreciates the opportunity to represent this user group, and many other recreationists. We feel that there is a lot of room for network improvement, and room for both recreation and environmental sustainability.”

The full plan can be found at https://crestedbuttemountainbike.com/riders-off-road-plan/

Share
Previous COVID and Community: How the pandemic is changing us
Next Western’s Paul M. Rady School of Computer Science & Engineering opens with new semester