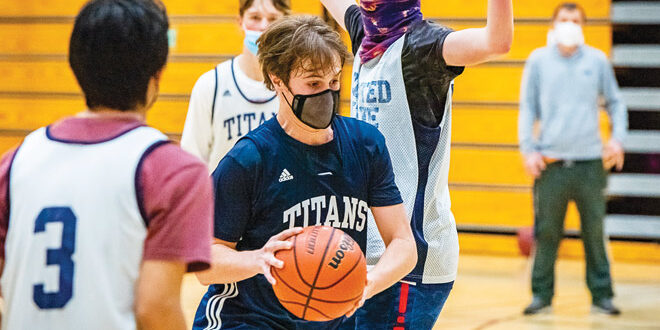 After years of trying to establish their identity, a new approach from head coach Brandin Hamilton and a squad of dedicated players helped transition the Crested Butte Titans boys basketball team into a rising force last year, not only within their 2A Southern Peaks league but throughout the state.

It appears that energy has carried over into this year as Hamilton continues to see a vested interest from his players toward continuing their rise. While non-mandatory, Hamilton saw far more consistent participation from his players throughout the fall and into the winter.

“We’ve been plugging along,” says Hamilton. “I’ve been lucky enough to have almost 100 percent participation from the varsity players.”
The players took the opportunity throughout the fall to focus on individual skills and the team switched gears in their focus following the Christmas break, waiting for the official start to the season.

“There have been phases in terms of how we’ve been doing and we treated open gyms following the break as real as it can get,” says Hamilton.
Now, after several adjustments to the schedule by the Colorado High School Activities Association, basketball officially returned to action with their first full team practice on Monday, January 18 and the players couldn’t be more excited.

“I have a real passionate group of competitors—they’re more than ready,” says Hamilton.

The team lost three key players from their line-up to graduation, two of whom were critical to a new defensive scheme Hamilton brought to the team last season. Nevertheless, he has three seniors again this season with a gaggle of juniors and some sophomores making waves as well at the varsity level.

“The chemistry is great with players stepping into bigger roles, some who have been playing together since the fourth grade,” says Hamilton. “Practices have been really competitive and they’re pushing each other to be better.”

With that in mind and months of open gyms behind them, Hamilton can now turn his attention to some fine-tuning with their first game on the near horizon.

“We’re at a point right now where we are cleaning up timing and spacing on offense and clearing up defensive assignments,” says Hamilton.
The fact that they made the regional finals last year and knocked off a couple 2A heavy hitters during the regular season has also created a new sense of confidence among the players to pair with their commitment as they head into the 2021 season.

“They feel like they are one of the better teams in the state and they want to play like it,” says Hamilton.

They open the season at home when they host Ridgway on Tuesday, January 26 at 4 p.m. Due to COVID protocols, no fans are allowed but all games will be streamed live on nfhsnetwork.com/subscribe/retail.