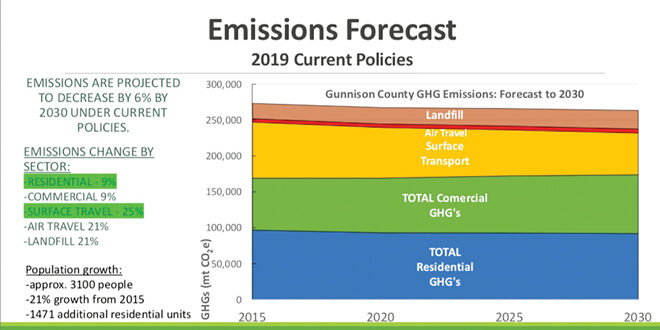 County looks to level up on climate change mitigation

No official plan but incorporating into strategic plan

Gunnison County is looking to take the next step in climate mitigation planning, focusing more on improving residential energy use, construction practices and transportation to lower greenhouse gas emissions (GHGs) across the sectors that create the largest climate impacts within the valley. Having finished an initial phase of the Energy Action Plan first adopted in 2009, county officials discussed policies during a work session with Gunnison County sustainability coordinator John Cattles on Tuesday, January 26 to include in a potential future strategic plan update.

With those projects either complete or under way, Cattles suggested next steps would be to focus on buildings as the biggest GHG contributor in the county, and then transportation as the second largest GHG contributor. He also recommended increasing the current GHG mitigation goal to 50 percent of 2015 emissions. Cattles said his personal goal is to be more communicative about what the county is doing in this regard, where he has in the past been “more focused on achieving goals than talking about them.” The county has no formal climate mitigation action plan per se, but Cattles emphasized, ”The BOCC’s Strategic Plan is the tool we use to direct energy and action at the County, what we’re doing is developing options and strategies to achieve the board’s goals.”

Buildings first
Buildings account for 61 percent of all GHG emissions in the county, with residential space taking up 57 percent of it and commercial spaces representing 43 percent, according to county records. The county’s first step in tackling this sector was through major energy reductions in county-owned buildings through new construction and renovations. The upcoming airport renovations and the new Gunnison library will use fully electric heat pump systems, which combine with on-site solar production in moving toward eliminating fossil fuels altogether.

Pivoting to the residential side of things, Cattles estimates that locally, there is about four times more square footage in residential homes than commercial buildings. He said there is room to focus more on building efficiency in several ways. This includes energy benchmarking, supporting the state reporting standard for buildings over 50,000 square feet and requiring energy audits and reports at the time of a new sale or lease, using a home energy score or something similar.

Cattles suggested the county continue to adopt energy code revisions and enforce them on all new construction through practices such as blower door tests. He also suggested contractor licensing with continuing education credits for building science and maybe also an award program for high performers.

He recommended the county require energy code compliance, or reasonable effort to comply, during renovation projects, noting that, “We would need to consider what level of renovation would trigger such requirements.” Cattles also recommended improving upon established programs like CPACE, by making it more accessible to local businesses and better funding GVHEAT, which targets the affordable housing market to assist in making energy efficiency improvements for both renters and owners.

“I just really believe in market power. I think if you give information to the market, like an energy score, it can be a really powerful tool…I think this community is really engaged in this,” he said.

Last, Cattles suggested promoting building efficiency and electrification by seeking grants to support rebate programs, and working with the local energy utilities to offer “on-bill financing” so residents could pay for geothermal or other electrification alternatives to fossil fuels.

“There is a lot of work we can do on buildings. There is the most opportunity on buildings,” he said.

Transportation: affordable housing and commuting
The second largest GHG emitter in the county is transportation, with surface transport accounting for an estimated 29 percent of all GHG in the valley. Cattles said that number is difficult to calculate but vehicle miles travelled per capita are higher locally (26.3 miles) than the average in the state (24 miles).

Transportation growth (18 percent) has outpaced population growth (4 percent), which indicates more people commuting up and down the valley, Cattles said. And it relates to land use policy.

“There’s a direct correlation between affordable housing where you work and vehicle miles travelled,” he said. “It takes time out of your day; it affects your family; it affects your ability to do things you have to do, like register your car,” he noted of those commuting up and down valley on a daily basis.

With a total daily count averaging 5,400 vehicles, he said, “It’s hitting us at a specific part of the community that’s travelling.”

Commissioner chairperson Jonathan Houck said commuting also takes away from people’s ability to take part in their community, whether it is after-school activities, volunteerism or social involvement.

Cattles said a good goal is to start with reducing vehicle motor traffic by 20 percent from 26 miles per day to 21 by 2030.

“These are not unreasonable concepts to work for,” he said. “These are doable.”

Cattles agreed that the impact of modified vehicles is an issue. “Studies have shown modified vehicles have the same impact as 9 million vehicles on the road. We can’t just ignore the cultural issue…I know it’s something some people feel pretty passionate about, but it is approaching a large scale in impact.”

Air travel and landfill contribute to 8 percent of GHGs in the county, so there is not much room to reduce those locally, said Cattles, aside from building a regional composting facility.

“It is a really small percent of overall emissions…but if someone comes up with some ideas, I’m certainly going to get behind them,” he said.

“Individuals can make those choices on their own, too. Composting in your yard is really easy to do,” Cattles pointed out.

Cattles concluded that it is important to create workforce housing stock near jobs, encourage density near population centers and maintain and connect access to public lands.

“The desire to be near open space led to urban sprawl in the first place, so creating and maintaining those opportunities for trails and recreation near community centers is important to prevent sprawl.”

Gunnison County community development director Cathie Pagano said it is also in keeping with the county’s strategic plan that commissioners have been working on with commercial/industrial zones and recommendations for residential development as well.

“Our constituents have repeatedly said they do not want to see sprawl. They want to see density, and preserve that open space and those ranch lands that are a part of this heritage,” she said.

Houck suggested the environmental factor be more of a lens through which to see all strategic planning. “I don’t see us moving away from these commitments that we’ve been making…but we also need to go back to our strategic plan and see where we didn’t factor it in.”

Commissioner Liz Smith said the communication of the county’s policy is key. “I think there are a lot of people who don’t realize what we’ve done.”

Cattles said he gets asked a lot why there isn’t a climate plan. “I think what we have is more important than that,” he said, but that he will work more on outreach. He said community meetings and the climate conference last year helped, and coalesced with the One Valley Prosperity Project goals.

Cattles also recommended that the board support a state bill requiring natural gas utilities to use a minimum percentage of “renewable natural gas” for their supply, and additionally push for a renewable fuel standard which would create a marketplace for bio-fuels in vehicle fuels. Interim technologies, he said, might be the way.

“Renewable natural gas being a biofuel the two policies would reinforce each other and create a low-carbon transition for things that are going to be difficult to electrify right now like heavy vehicles,” he said.