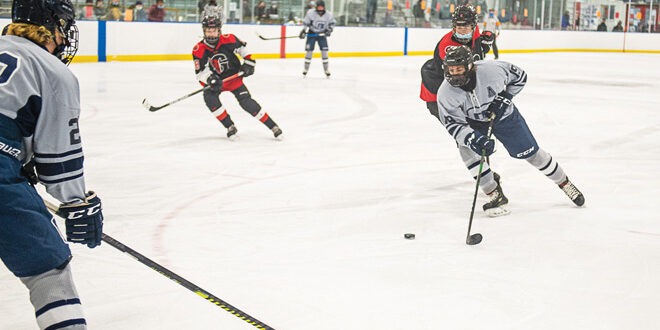 he Crested Butte Titans hockey team remains undefeated after winning three games this past week and is sitting on top of the 4A Mountain League standings with a record of 7-0.

It all started with a gritty battle against the Aspen Skiers on Wednesday, February 17 in Aspen. The Titans handed Aspen a couple of resounding defeats earlier in the season but the Skiers looked to build energy from their home ice to avenge those previous losses.

“I knew Aspen would be tough the third time and playing in their home barn, especially after a long travel day,” says coach Billy Watson.

The long travel had little effect on Crested Butte’s play though as they proved quicker to loose pucks and team positioning and puck pressure kept Aspen from executing their breakouts up the ice.

Aspen eventually caught up to Crested Butte’s pace but the Titans maintained their edge throughout the first period to build a 3-1 lead including a short-handed goal in the final minute of the period when Matthew Solanik caught the Skiers sleeping and picked the puck of a player to score.

“The boys came out at the start pretty good,” says Watson.

The tides turned in the second period as Aspen adjusted and traded goals with the Titans throughout the period. A flurry of penalties on the Skiers opened up several chances for Crested Butte to pull away but Aspen held tough and took advantage of the chances they had to remain in the hunt down just 5-4 after two periods.

“We had several powerplay chances and were close but we couldn’t pull away,” says Watson.

The third period saw Crested Butte come perilously close to having the game slip away. Adam Collins blasted a shot from the point past the Aspen goalie midway through the third period for a 6-4 Titans’ lead but a flurry of penalties, including several minutes of playing two men down, had Crested Butte scrambling to hold their lead.

Aspen capitalized on one powerplay to pull back within one and had a two-man advantage in the waning minutes as they pulled their goalie but the Titans held off the final Skier surge to seal the 6-5 win.

“We were down a man, sometimes two, for the last eight minutes of the game and the kids just did a great job executing the penalty kill,” says Watson. “The boys just battled through it.”

The Titans then returned home to host two games against the Glenwood Springs Demons on Friday and Saturday, February 19-20.

This would be the first time they had seen the Demons this season and the word on Glenwood was that they had solid goaltending giving up the least amount of goals in the league leading up to the game.

Ultimately, Crested Butte managed to find some space past both Glenwood goaltenders winning on Friday 5-2 and then again on Saturday 4-2.

Crested Butte came out flat in Friday’s game in the first period but a wraparound goal from Piccaro had them up 1-0 by the end of the period.

They ramped up their play at the start of the second period as both Collins and Piccaro struck to put Crested Butte out in front 3-0 building a little cushion.

The Demons battled back to score two goals and cut the Titans’ lead down but Joseph Stock scored five minutes into the third period to rebuild a slight cushion and when Glenwood pulled their goalie, Jack Lambert slipped the puck into the empty net for the 5-2 win.

“All of those goals came from good puck movement,” says Watson.

Glenwood switched up goalies for the second showdown and the demons’ netminder was on point in their second game. But Crested Butte’s patience paid off over the three periods as they skated to a 4-2 win with goals from Sam Buckhanan, Piccaro, Lambert and Solanik.

“We talked to them about how they would react when they faced a goalie who’s hot and they did well,” says Watson. “We saw great production out of a lot of people and good puck movement. It was a big team win.”

The Titans head to Steamboat Springs Friday and Saturday, February 26-27 to face the Sailors. Steamboat sits in the middle of the standings but has shown a penchant for upset wins so the Titans need to keep up their play if they want to remain on their winning streak.

“We’re taking it one game at a time and we need to take these two games seriously,” says Watson. “The kids know it and they know what to do. We’ll see.”