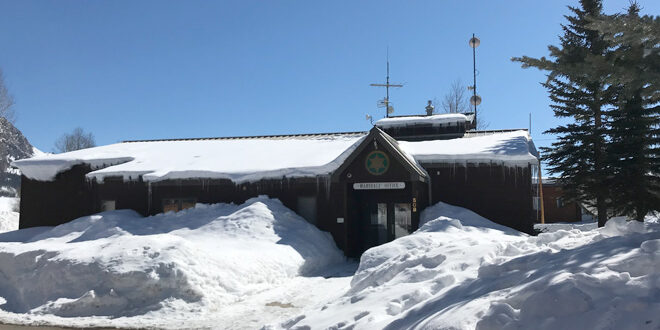 But is the tower too tall?

After many years of discussions, obtaining new fiber optic cable to Crested Butte that will upgrade the broadband capability at the north end of the valley will start in earnest this summer and could be completed in 2022. The Crested Butte town council will consider using the marshal’s office as a so-called “Carrier Neutral Location” (CNL) to facilitate the needed infrastructure at its next meeting.

What is being termed the “middle mile” of the fiber system between Gunnison and the North Valley is being coordinated through the Region 10 organization that helps governments in Western Colorado and will be centralized at the marshal’s building before heading up to Mt. Crested Butte. Once set up, various Internet providers will have the chance to tap in and sell their services to residential and business customers ​also known as the so-called “final mile” of the system. The expectation is that the new system will allow for more competition between Internet providers and result in better, faster service at lower prices.

The cost to run the fiber from Gunnison to Mt. Crested Butte is estimated to be about $5.4 million. Several grants have been awarded to help defray the cost and a community “match” of $540,427 is required for the project and largely secured through various entities. The estimated cost to construct the CNL in Crested Butte is $114,000.

“This model was started five or six years ago and it works really well. It can bring a lot of benefit to the community,” Region 10 Broadband project director Virgil Turner told the council at its February 16 meeting. “These projects are very expensive but I think all the stars are aligning for Crested Butte and Mt. Crested Butte. Ultimately the service will be a lot better with 10 or 20 times more capacity for what people are paying now or less. By getting the fiber up here, it reduces costs for Internet providers and that ultimately benefits consumers.”

The CNL location would house equipment to facilitate the broadband fiber and hook-ups. Turner said it would need a back-up power generator that would cover the whole building. He also proposed constructing a tower as part of the project. He estimated it would be about 40 feet tall and provide a wireless component to the project.

Mayor Jim Schmidt brought up negative comments received by neighbors after a cell tower was located to handle cell phone service in the town’s public works yard. Turner said the project does not involve cellular technology and the FCC classifies the radio frequencies that would be used at the CNL, ​the same currently in use for Wi-Fi, as “not harmful.”  When asked about concerns about 5G, he said the term 5G refers broadly to several different frequencies including millimeter wave, which is the most controversial, that is only effective over short distances. Turner explained that given the high costs of creating a dense number of antennae sites and the population he doesn’t foresee millimeter wave 5G technology coming to places like Crested Butte given the potential low Return on Investment.

Councilwoman Laura Mitchell felt locating a 40-foot tower at the marshal’s building was too tall. “That huge of a tower won’t fly,” she said. “I think it will be offensive to many community members. I find it offensive,”
Turner said the plan has to go through BOZAR (Board of Zoning and Architectural Review) “and we can take it out of the plan if it is not acceptable to the community. But it gives the ability to incorporate fixed wireless connections for this major hub. Having the tower would eliminate the antennas already on the marshal’s building and this will be about the same height as those antennas.”

“It is something we need to talk about with the community,” emphasized Mitchell.

Schmidt said objections to the tower would be appropriate for BOZAR to hear. Turner said the look of the tower might be able to be designed to make it more acceptable to the community.

“We can do whatever the community wants,” said Turner. “We recommend including that capability. The networks we build provide bandwidth that can handle things like making a home a classroom and all the needs that go with it.”

As for helping to improve Internet and cell service redundancy in the county, Turner said it could help but there are separate projects in the works to address that issue. Service lines that go to Albuquerque and not just Denver are now in place and a new line over Cottonwood Pass will provide another outlet.

Turner said under some of the grant requirements, Region 10 must secure the CNL this spring. He said the project should be completed by the second quarter of 2022.

The council will hold a public hearing on leasing the marshal’s building as a CNL to Region 10 at the March 1 meeting.