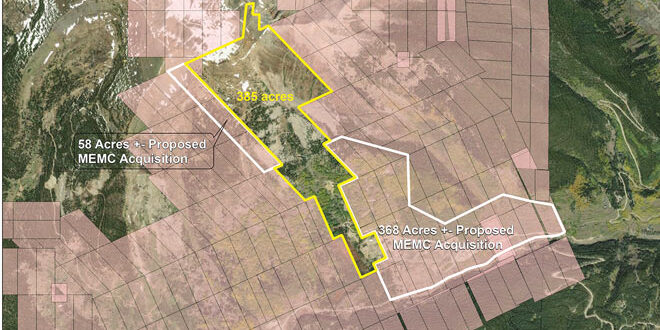 Starting the last chapter in the fight with a land exchange?

The beginning of the end to the decades-old fight over potential mining on Mt. Emmons appears to be close. While nothing is set in stone and details have yet to be defined, the mining company that controls mining on Red Lady is proposing a plan to eliminate mining on the mountain. Seriously. At the same time, winter backcountry ski access and water quality protections would be maintained. This has resulted in cautious optimism from officials across the valley.

The Mt. Emmons Mining Company (MEMC) which is a subsidiary of global mining giant Freeport-McMoRan, has officially proposed a deal that involves a land swap with the U.S. Forest Service, a conservation easement and ultimately a withdrawal of existing mineral rights on the nearby property. “At the conclusion of the land exchange and mineral withdrawal process, MEMC will relinquish all unpatented mining claims which, when combined with the conservation easement, will effectively end the possibility of mining on the Red Lady,” a press release from MEMC announced this week.

The proposal in a nutshell
In a letter to the Forest Service dated February 19, MEMC asks to begin the federal review process to acquire 450 acres of USFS property adjoining the current MEMC property where the water treatment plant (WTP) and other mine related sites are located. The USFS would then be given approximately 160 acres of ranchland owned by the mining company located at the headwaters of the Ohio Creek drainage.

“MEMC would place a conservation easement on the upper portions of company-owned property restricting future mining and milling activities and allowing a certain degree of public access for recreational purposes across these lands to adjoin USFS lands,” the letter proposes. At the appropriate time, “MEMC agrees to support the USFS petition for an administrative withdrawal of the unpatented mining claims for the maximum period allowed by law to allow for the proper timing and maturity of a legislative withdrawal in the future.”

The letter, signed by MEMC vice president Francis McAllister, concludes with “We believe that this proposed exchange addresses the concerns of the community…”

The exchange is expected to make further cleanup and water treatment upgrades easier with less government oversight by making the area privately owned. But federal regulatory programs with jurisdiction over the treatment of water will continue to be administered by the Colorado Department of Public Health and Environment (CDPHE) and remain unaffected by the land exchange.

Town of Crested Butte sees significant step forward
Crested Butte mayor Jim Schmidt sees the proposal as being a significant step toward concluding the Red Lady fight. “It’s not a victory until it’s done but this is a pretty big step,” he said. “The water is still protected by state and federal laws and agencies. Freeport has done field studies on several types of treatment facilities that they feel will be as effective and cost less to operate. As they say, the devil is in the details and there is still much to be worked out but it this is a meaningful step forward.”

Town manager Dara MacDonald agrees the work is not yet done but the proposal sets up a potential conclusion. “This is a significant step forward in the Red Lady fight,” she said. “We are finally at a point where the interests of the mining company and the community are aligned and tangible action is being taken toward resolution of the possibility of mining on Red Lady. There are many, many details to be worked through in the coming years but MEMC has demonstrated that they intend to accept the responsibilities to limit the negative environmental legacy of past mining efforts on the property and work toward complying with water quality regulations. Further, they have outlined the steps to work cooperatively to eliminate the possibility of a large mining operation in the future. There is a lot of work ahead to implement each step in the process and ensure the community’s interests are protected.”

HCCA and the county ready to keep doing the work
The High Country Citizen’s Alliance was originally formed to fight the idea of molybdenum mining on Red Lady. It has morphed into a broader environmental organization now known as the High Country Conservation Advocates. While not popping champagne corks yet, HCCA officials say this action by MEMC is a step in the right direction.

“This is a big step toward a permanently mine-free Red Lady. However, we’re still not to the finish line,” said HCCA water program director Julie Nania. “Numerous steps remain to be taken, including the withdrawal, land exchange and establishment of conservation easements on the company’s private lands. There are significant practical details to work out, so it’s critical that the process is transparent and that our community has sufficient opportunity to weigh in and secure assurances that the properties transferred to MEMC will remain protected. HCCA looks forward to working with the local parties and MEMC as these details are developed.”

HCCA’s executive director Brett Henderson stated that, “We are cautiously hopeful that this is the pathway forward for permanent protection of Mt. Emmons that we have been fighting for.”

Gunnison County has been involved with the latest developments and like the town and HCCA, is ready to continue the effort toward resolution.

“The County, along with the town and the state, entered into a memorandum of understanding with MEMC in 2016 to work together to address the mine and the eventual disposal of the mining claims on Mt. Emmons in a way that benefits everyone,” noted Gunnison County attorney Matthew Hoyt. “The County is pleased with the progress we’ve made to date, and will review MEMC’s proposed land exchange in the spirit of cooperation that the 2016 agreement envisions. This is a long, complicated process that necessarily requires effort and time from all concerned, and the County remains optimistic that we can work together to resolve these issues and reach resolution.”

From the company…
MEMC media official James Telle responded to some questions from the News for the company and said they are trying to be good neighbors. “Since acquiring Mt. Emmons in 2016, we have listened to the community and recognize the local concerns surrounding mining, reclamation, and recreational access,” he responded in an email. “MEMC understands the importance of the Red Lady and other recreational opportunities to the community and wants to be good neighbors in working together to provide access while performing our obligations to mine reclamation and water treatment. The company is committed to the safe operation of this work, while working with the community to provide recreational access.”

He said the land exchange would make future mitigation work easier. He explained that consolidating the property would enable more efficient future reclamation through streamlined decision-making and execution of timely work during short construction seasons. He emphasized that MEMC will continue to comply with all federal, state and local laws and regulations and obtain all permits associated with the activities.

When asked if there would be any potential mining ever on the mountain under the proposal, even if the price of molybdenum skyrockets, Telle reiterated that, “If the land exchange process with the USFS is successful and the Service withdraws the land from potential mining” (through a mineral rights withdrawal) there would be no mining activity on Red Lady.

But there could be continued backcountry skiing access and new ways to treat contaminated water in the future. “As the public process of the land exchange proposal proceeds, MEMC plans to collaborate with the community to develop opportunities for public recreational access,” he stated. “We intend to respect the community’s desires in balance with MEMC’s operational safety requirements associated with the company’s commitments for reclamation and water treatment. MEMC plans to continue the treatment of water discharging from former mining activities. Technology is evolving and we are keenly interested in new technologies and demonstrating how existing technologies may be used to improve efficiencies for water treatment.”

MacDonald is confident that the town’s water supply will continue to be protected. “MEMC has been cooperating with the Town and community partners to address the legacy of water quality issues coming from the site. The mining company has taken demonstrable steps towards addressing surface runoff and planning for future water treatment improvements,” she explained. “There are still significant actions yet to be taken to ensure discharge from the site can meet regulatory requirements into the future. A strong working relationship has been developed in recent years and town staff feels good about the prospects for continued and sustained improvements to water quality in Coal Creek.”

Win-win-win
In the company press release, McAllister emphasized that the company believes the proposal “provides mutual benefit not only to USFS and MEMC, but also to the residents of the Town of Crested Butte, Gunnison County and the surrounding local community.”

MacDonald agrees. “This is a promising first step. The community will be able to move forward without the lingering cloud of a threatened mine always in the backdrop. It will be a testament to the perseverance of the community groups and individuals that came together over many years and took a firm stand for the values of the community – the environment, open space and recreation – and to the collaborative efforts with a willing landowner.”

Gunnison Forest District Ranger Matt McCombs emphasized that while the proposal is hopeful, nothing will be decided tomorrow. “The future of mining at Mt. Emmons has been a longstanding issue in the Gunnison basin. The MEMC land exchange proposal has the potential to resolve this issue in a way that both MEMC and local communities can support and that has folks cautiously optimistic,” he concluded. “The Forest Service looks forward to working with MEMC, local leaders and the public to thoroughly consider the proposal before making any decisions.”

HCCA’s Nania says the future looks promising. “Although there is significant work to be done, the proposal that MEMC submitted to the USFS starts the process of moving toward a final deal,” she said. “It is also a promising public declaration of MEMC’s intentions to tackle these issues working with our community.  In essence, if we can see this through to resolution we could keep intact a core part of the heart of our community — Red Lady.”