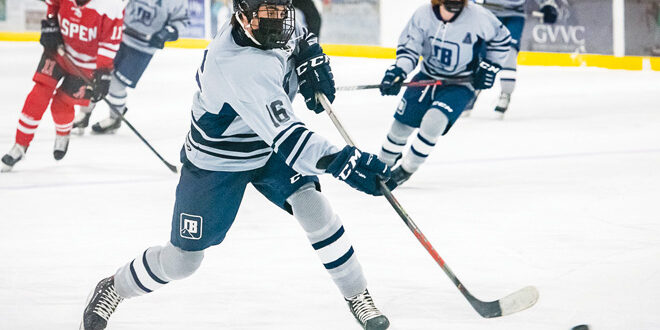 The Crested Butte Titans hockey team ran roughshod over the Aspen Skiers during a two-game home stand last weekend winning both games by a combined score of 17-5 to improve their record to 3-0. They head back out on the road this coming weekend to face Summit on Friday, February 12 at 5:30 p.m. and can viewed on the Crested Butte Titans athletics Facebook page.

While the Titans opened the season with a relatively easy 7-2 win a week earlier, the consensus among the coaching staff was the team would need to pick up their game for their showdown with Aspen.

“They have good systems in place and they got some new coaches this year so we weren’t really sure what to expect,” says head coach Billy Watson.

The first period was a bit erratic for both teams but the Titans’ effort at the blue line in the offensive zone and the neutral zone did a good job of keeping Aspen out of sync. While the Titans efforts with the puck were far from smooth as well, they did enough to create the majority of opportunities through the opening period.

The Titans opened the scoring early when Joseph Stock scored off an assist from Braydon Duncan and Crested Butte’s edge with puck possession led to another goal in the eighth minute when Rowan Piccaro skated to net looking to stuff the puck in. The Aspen net minder made the initial save but Stock was there to score the rebound for a 2-0 lead by the end of the first period.

“That was key popping two in right away,” says Watson. “Anytime you get up on a team like that is good. The more you let them hang around, they’re gonna linger and think they have a chance.”

Aspen did try to hang on as they scored during a powerplay but Crested Butte responded almost immediately as Stock recorded his third goal of the game. Aspen responded 25 seconds later but Crested Butte answered right back when Piccaro scored from an assist by Stock. Aspen came back once more with a third goal but the Titans had the last say of the seven-goal period as Lambert scored off an assist from Trujillo for a 6-3 Titans’ lead.

“It really helped us out to answer right back,” says Watson.

The Titans finally put Aspen away for good as they scored four more goals in the third period while only giving up one for what local hockey announcer John Solanik described as a “Texas-sized 10-4” win. Stock finished the game with four goals, Lambert and Piccaro each tallied two with Cael Medina and Trujillo each scoring one.

“We just weren’t playing tight enough in our defensive zone and letting them inside the house,” says Watson. “We needed to tighten it up, we were scrambling around.”

Crested Butte returned to the ice Saturday, February 6 for a second game against Aspen and with things tightened up on defense, they skated to a 7-1 win.

“I think we did a much better job in the second game,” says Watson.

The Titans jumped out to a 4-1 lead in the first period with Stock racking up an early hat trick with all of the assists coming from Piccaro and Lambert netting one off an assist from Trujillo.

“I like seeing Rowan in more of a playmaker role and it’s really nice seeing Joseph finding his scoring touch,” says Watson.

Stock and Lambert each added another goal in the second period with Duncan joining in on the scoring frenzy and the Titans cruised through the third period to the 7-1 win.

“I like what I’m seeing so far out of the kids but we need to work on our defensive zone,” says Watson. “Obviously we want three solid lines, and we have that, but we’re still working on finding the right chemistry.”

The Titans hit the road to face Summit on Friday, February 12 at 5:30 p.m. and then head to Aspen’s house to meet the Skiers on Wednesday, February 17 at 5:30 p.m. You can watch all of the Titans’ hockey games on the Crested Butte Athletics Facebook page.