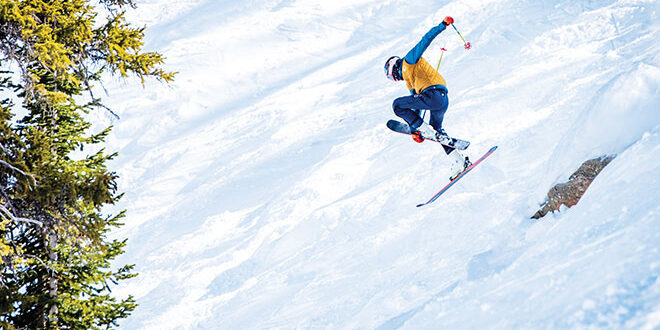 Spinning and carving their way to multiple podiums

A little fresh snow, some sun and a mass of rippers ages 10-18 took over Hawk’s Nest Thursday and Friday, March 11-12 for an IFSA (International Freeskier and Snowboard Association) Regional 2-star event.

With COVID curtailing the typically robust freeski and snowboard junior tour, the Crested Butte Mountain Sports Team (CBMST) has managed to get in some competitions this winter leading up to the home hill event.

“CBMST freeride’s season has been outstanding,” says head freeride coach Will Dujardin. “So far, the CBMST has been able to compete regionally this season at various Colorado resorts while following COVID safety protocols.”

And while training was somewhat hampered by a lack of snow for the beginning months of the season, the storms finally rolled in, the High Lift and North Face opened and the kids and coaches ramped up their training regimen.

“When the T-Bars opened the athletes could then progress their technical fundamentals from the groomers, bumps, and park to steep, variable terrain and snow conditions with natural features,” says Dujardin.

That certainly proved true as CBMST athletes led the way winning the top spot in eight of the 11 divisions that competed over the two days and racked up numerous podiums across all but one division.

It all started Thursday, March 11 with the u12 divisions under the age of 12 competing in the IFSA Regional Junior 2* event. The local kids defend the home turf going 4/4 on top of the podium in U12 Divisions amongst skiers and snowboarders male and female with Sidra Anderson, Temple Robertson, Brooks Miller and Finley Nolan all taking the top spot. Finley became the first female athlete in CBMST program history to stomp a 360 in a freeride comp.

“It’s really amazing to see where the U12 athletes are able to push themselves,” says Dujardin. “The strength of the program as a whole shines when you see the younger athletes taking pages out of the older athletes’ books and step up to aggressive lines.”

Later that day and into Friday kids ages 12-14 competed with the 15-18 year old boys and girls closing the show Friday afternoon and the local contingent continued to take advantage of some local knowledge of the hill.

There were a lot of firsts as Marin Gardner stood on top of the podium for the first time, with Sam Anderson right behind him in second place, while Devin Lindenmeyr took the win in his division on Friday in his first freeride competition ever on loan from the Race squad.

Max Shull took first in the 15-18 Ski Male division in his first freeride competition ever as well in his first year on the freeride team in his senior year of high school.

“The CBMST had many athletes compete in a freeride competition for their first time, and many more getting starts at home over the two days,” says Dujardin.

The 15-18 year old athletes put on a show as Ella Haverkampf and Zoe Hanna placed second and third while Max Shull won the 15-18 year old male division with Gus Bullock spinning five separate times on his run to place third.

The season will come to a close in the next few weeks for the local skiers and snowboarders. Next, some athletes have regionals at Breckenridge this week and at A-Basin next Thursday to wrap up the regular season, while others could be invited to 12-18 year old Regional Champs at Breckenridge March 31 and April 1. The u12 athletes that make the cut will go to Ski Cooper on April 9 for their Regional Champs.