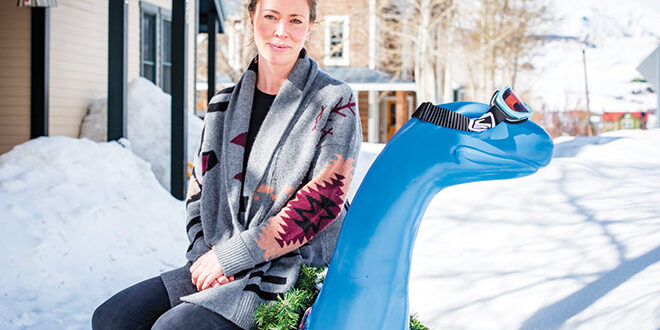 Finding the right mix with WCU, CU, CB and Gunni…

“I actually never wanted to go into academia,” says Jeni Blacklock, the daughter of two educators. Her father taught middle school math and her mom was an elementary school English teacher. Jeni was born and raised in Sylvan Lake, a suburb of Detroit. Childhood days were spent on the lake and Jeni became a state ranked competitive swimmer and her team, the Black Dogs, was nationally ranked. Even though swimming was her life, she loved school and did well in classes. “I really loved art and I played oboe in middle and high school,” she says.
Growing up with the diverse cultural events of the Motor City, Jeni and her friends often went downtown to Detroit for concerts, art and to peruse through the Eastern Market, which was like a huge farmers market that had everything. “We’d go to the Detroit Opera House and the Detroit Institute of Arts and we’d go to Jazz Fest to listen to music,” she tells of an entire jazz district.

When Jeni graduated in 2000, she had already won national awards for her art, but was offered scholarships for engineering since she excelled in math and science. She chose Miami University in Oxford, Ohio. Since the school had a small engineering program at the time, Jeni was also able to include art and language classes. She studied abroad in 2003, spending a semester in Krakoa, Poland, at AGH, which she laughs, “I can’t pronounce the name but it’s their technical university there.” Jeni earned two degrees in 2004, a Bachelors of Science in Manufacturing Engineering, and another in Engineering Management.

Every summer Jeni lived in Boston, taking classes at Boston College, Boston University and MIT. She did her internship during the summers as well, working for a consulting firm, helping to design and install automated assembly lines for the car industry. After completing her internship, she was hired by that same consulting firm and she continued taking night classes. “I liked school. I’ve always been fascinated with different subject matter. I love mechanical and manufacturing engineering and figuring out how to make things efficiently. There are so many constraints and variables that go into manufacturing and they’re really fun, complex problems to solve,” she says.

Traditionally that sort of engineering was dominated by men. “I always welcomed the challenges of being a woman in a man’s field and I always had a lot of confidence,” she says. “It wasn’t that I knew everything, it was more that I felt, ‘oh, I can figure it out.’” She went on to get her Masters in Bio-Medical Engineering, writing her thesis, funded through the National Institute of Health (NIH), on the manufacturing of gene and drug delivery systems. “They offered for me to stay on for a Ph.D,” which she decided to do since it also funded her work for the next few years, until the market crash of 2008 severed her funding. However, she was then awarded a Fulbright Fellowship and moved to Germany in 2008 to attend the Max Planck Institute outside of Berlin where she earned her Ph.D in 2009. Jeni did a post doctorate, a research opportunity where she continued to work on applications of colloidal and interfacial systems.

She returned to the U.S. in 2011, uncertain of where she wanted to be or what she wanted to do. “I looked up best places to live in the U.S., and Boulder came up as number one, and I had never been there.” But what really caught her eye about Boulder, she says, was that, “There were a couple national labs there.” Jeni applied for a National Research Council Fellowship to work at the National Institute of Standards and Technology and was hired in 2011 as a materials engineer.

While living the Boulder life, Jeni got into mountain biking, bouldering and the Xterra Triathlon. “My friends were other geeky scientists and engineers, but we were women and women aren’t always geeky,” she laughs. She met her hubby-to-be in one of Boulder’s breweries on a Saturday afternoon after she had spent the day both mountain biking and bouldering. “So I had blood on my elbow and chalk on my fingers,” she recalls. Not impressed with him at first, she wound up talking about single wall carbon nanotubes to his best friend, who was also a Ph.D chemical engineer. When she finally began a conversation with the seemingly unimpressive Greg VanderBeek, she discovered he was also from Michigan and also an engineer. “He asked if he could test ride the Xterra with me the next day. He crushed me. He said he wasn’t using brakes on the downhill,” so she tried his method, and wound up with a fractured sternum and three broken ribs. She did the Xterra the following week, despite her injuries, and she married Greg anyway.

“I had an amazing relationship and experience with everyone at CU but a small university study allows you to push initiatives, to be more innovative and to work more closely with students,” she says of the return. Their second son, Louie, also came along that fall.

Last spring, CU Boulder contacted Jeni to start a partnership program with Western Colorado University (WCU) in Gunnison. The program is a new school of computer science and engineering with two different degree programs under the same school. “The students take classes at WSC but get their degree from CU,” she says of the undergraduate program. “There are three faculty seats; myself, my husband and a new computer science hire who will start this summer. We’re at almost 40 percent first generation college students, mostly from Colorado but also other states. We’re recruiting to increase underrepresented minorities and women in mechanical engineering and computer science.
“We’re trying really hard to get the new school integrated into the campus and community, collaborating with local industries,” she continues. The endeavor, she explains, is the Senior Capstone project. “Seniors who are mechanical engineers and computer science students at the college who will work with an industry partner to help solve a complex problem that the business is having.”

Last November in 2020, the family moved to Crested Butte. “We had taken our first camping trip together to go mountain biking up Cement Creek in 2011 and we’ve been coming back every year. I know what CB is like, having spent time here, and we have a lot of friends here. We get the community and we love both the CB and Gunnison communities,” she says. “Crested Butte holds a special place in our hearts. Our little corner has permanent residents who are just wonderful, and it’s definitely a great community.”

Share
Previous Aaron Blunck returns to the top of the podium
Next Titans hockey falls in 4A state final in O.T.