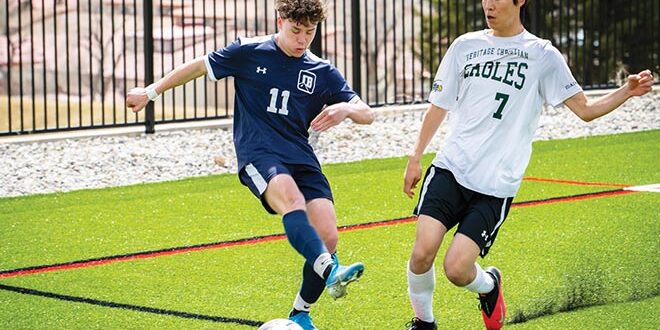 The Crested Butte Titans soccer team kicked off the 2A state soccer tournament in fine fashion running away with an 8-0 win over the Heritage Christian Eagles on Saturday, April 24 on the Western Colorado University (WCU) turf field. The win sends the Titans to the semifinals where they will face perennial 2A powerhouse Dawson who had an easy go of it in their first round of the tournament with a 6-1 win.

With April Break hitting the Titans team just before the first round of the state tournament, numbers were slim with 8-10 players available for practice the two days leading up to the game Saturday.

“Workouts were productive for having less than half the squad, giving us time to work on certain items, but I wish the rest could have been there to learn these lessons as well,” says coach Bob Piccaro.

But, by Friday night, enough had returned from their trips to roster 15 players for the game and the team got together Saturday morning to try to get everyone back on the same wavelength for the game that afternoon.

“We had a kickball and handball session before the game and that helped get us in the competition mindset rather than vacation mindset,” says senior captain Nathan Miller.

The Titans had no idea what to expect from the Eagles. Heritage Christian is in Ft. Collins and spent their season facing some of the stronger Front Range programs. And while they fell to the top teams in 2A, each game was a tightly contested battle so Crested Butte expected a strong opponent in the opening round.

Crested Butte went straight to work from the opening kick off establishing a possession-based style of play as they looked to pick the lock on the Eagles’ defense using the massive expanse of the WCU field. Heritage Christian held strong through the initial attacks but a pass wide to Gabi Marmolejo lured the Eagles defense to one side of the field and Marmolejo played a ball across to Blue Gardner attacking the opposite side. Gardner held off an initial challenge from an Eagle defender and when he looked to play the ball back across the six-yard box it knocked off an Eagle defender and into the net.

“The first goal is always the hardest but we felt we were the better team and we turned it on after that,” says Miller.

Heritage Christian continued to battle the Titans, and the altitude, but as the half wore on, the Eagles started to wear down. They stood tall in their effort but the Titans netted their second goal of the game in the 21st minute when Marmolejo and Gardner connected again for a 2-0 Titans’ lead.

Twelve minutes later Marmolejo set up another Titans’ strike when he found Baden Garmhausen open in the center 25 yards from the Eagles’ net with a low pass. Garmhausen took a one-time shot and the ball slipped through traffic and into the bottom corner for a 3-0 lead at halftime.

“We were happy enough with a 3-0 lead in a state game but not satisfied because we had a lot of chances but only capitalized on three,” says Miller.

The coaches impressed upon the team the importance of maintaining their pace in the second half during the break but Crested Butte came out of the break a bit flat.

Fortunately, the back line of Eric Lain, Otto Billingsley and Nathan Miller were there to clean up the mess on a couple of occasions until Crested Butte woke back up to return to their attacking style of play.

Once the switch was flipped, Crested Butte went back to work scoring their fourth goal in the 16th minute of the second half when Grayson White carried the ball inside the 18-yard box and slid it across to Jamis Matlock for a low blast. A minute later Jacob Bernholtz drove straight down the middle of the field to score and Garmhausen scored his second goal of the game off an assist from Cedar Fessenden to put the Titans on top 6-0 midway through the second half.

“I think our strikers started to capitalize when it came down to it and I think Heritage was getting tired as well,” says Miller.
After a quiet 10 minutes, the Titans finished the game scoring two more in the final 10 minutes of play. White served up an assist to Marmolejo for the Titans’ seventh goal and the two switched roles on the eighth goal as Marmolejo’s effort opened up a toe poke for White to close out the 8-0 win.

“It was sort of what I expected but I thought they’d have more depth and strength,” says Piccaro. “Heritage seemed really young.”
Crested Butte is on to the semifinals now where they will host Dawson out of Boulder on the WCU turf on Wednesday, April 28 at 3 p.m. Dawson comes into the tournament the third seed and put together a strong regular season with wins over a handful of quality programs.

“We need to turn it up another notch and win more 50/50s and put more shots on net,” says Piccaro.

While spectators are limited at the game, it will be broadcast on the CB Titans Athletics Facebook page. If the Titans win against Dawson, they will head to the 2A state tournament finals on Saturday, May 1 in Colorado Springs.