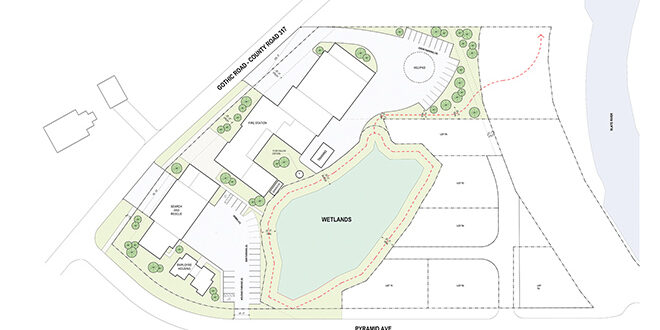 Citing increasingly tight quarters and less than perfect location logistics, the Crested Butte Fire Protection District board and administration are moving toward a new “public safety campus” to be located in Crested Butte’s Slate River development near the Aperture subdivision.

The campus would ideally include a new fire station, a separate training facility, a building to house Crested Butte Search and Rescue and an affordable housing four-plex. The town had negotiated 1.55 acres for the CBFPD as part of the annexation deal with the Aperture developers. CBFPD has expanded that by putting two acres from adjacent property owned by Spann Ranches under contract. Once the two acres is annexed, that would make the proposed campus three-and-a-half acres.

The four buildings on the site would be an aggregate of about 45,000 square feet with the fire station being the largest structure at approximately 29,000 square feet. The district currently uses about 3,500 square feet in station-1 located at Maroon Ave. and Third Street and another 600 square feet next door at 308 Third Street. The CBFPD is still working out details of exact size and cost but plans to ask voters this November to approve a bond issue to pay for the new facility.

Because the new facility would be located within town, it would have to get BOZAR (Board of Zoning and Architectural Review) approval. “Town Council will first need to approve the CBFPD’s two-acre parcel’s annexation and zoning,” said Crested Butte community development director Troy Russ. “Once the annexation and zoning are approved, BOZAR becomes the reviewing authority as they review the development applications. The transfer of property would not occur until BOZAR approves the architecture for the project.

“It is important to note, the concept plan and the transfer of the property is contingent on BOZAR approval. Nothing in the agreement or concept plan preempts BOZAR authority,” Russ emphasized.

District feeling the squeeze
“The District is facing serious constraints at our downtown Crested Butte station as there isn’t sufficient room in the station to accommodate sleeping quarters or any additional fire equipment,” explained CBFPD chief executive officer Sean Caffrey. “The CB station is important because it sits in the geographic middle of the Fire District. Without sleeping quarters, it can’t be staffed 24-hours a day nor can we respond to an emergency from the middle of the fire district during evening and overnight hours. Right now, our personnel may or may not respond from the same location leading to multiple vehicles coming from multiple directions. Ideally, we would prefer to have six or more responders, including both paid and volunteer members, to be on-duty 24/7 and ready to go from the CB station which is simply not possible currently.”

The location of the current primary fire hall has also become a problem in recent years. He said being on Maroon Avenue in the downtown core was great in the 1970s and 1980s when most of the volunteers could literally walk to the station and respond to a call. “Nowadays our personnel have to respond into the downtown core then respond out with large equipment often competing with pedestrians, bicycles and other vehicular traffic just to get back out Sixth Avenue and most of the district,” he said. “The problem is scaling up the district’s physical capacity to address the future needs of firefighting and other emergency services. The solution is to buy property and build up to four buildings that will address the community’s emergency services needs in the years and decades to come.”

As for the deed-restricted housing element, Russ said the CBFPD will own the four units, with a minimum of eight bedrooms. “These units shall be primarily used for rental to CBFPD employees, volunteer members, or contractors as determined by CBFPD policy,” he explained. “Should there be insufficient interest for CBFPD use these units shall only be rented to residents of Gunnison County with a priority for local public sector employees.”

Seeking public feedback
The district is starting to engage the public to get a feel for what they might find acceptable in a fall bond issue. “The longer term option – the one that anticipates the District’s needs for the next 50 years and beyond – includes erecting the four buildings including housing for four responders and their families. We are also looking at scaled back options that would not include building a training facility at the campus, reducing the size of the fire station to accommodate fewer on-duty personnel, and a scaled down Search and Rescue facility,” Caffrey said. “We are still looking at a ballpark cost of between $20 million and $30 million, however we are bringing on a general contractor to help us with pricing now. As an unimproved site there will be significant infrastructure and utility costs in addition to the buildings that we are still working on.”

Caffrey estimated that if voters approve the bond issue, the project could start in the summer of 2022 and would take about 18 months to complete once started.