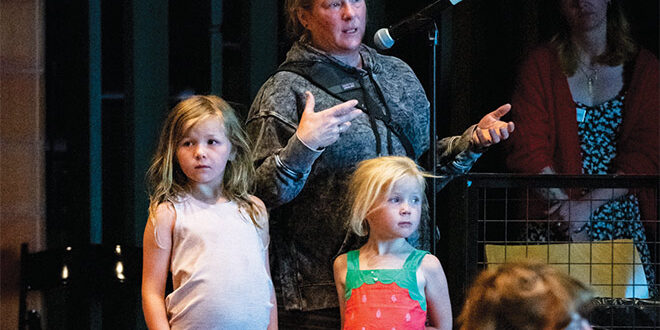 Long-term projects in the works, but short-term solutions needed

The Crested Butte Center for the Arts’ Steddy Theatre was filled with more than 150 community members last Wednesday to share their housing concerns, offer ideas and hear from local representatives working on affordable housing projects and solutions in the valley.

All panelists agreed that the lack of housing for locals is a community-wide issue and has affected every part of the community’s demographics and economy – from restaurants and retail, to healthcare and schools. “It touches everything from the lowest income service work to the highest income profession work,” said Sinkewich.

“Housing has been a priority of the Town of Crested Butte since the ‘80s,” said Russ. “When you’re living in paradise there’s a high demand to live here. But there’s an imbalance of demand and supply. It’s almost impossible to keep up. The Town of Crested Butte with our partners have been doing a lot of regional planning with projects that are coming online.”

Russ explained that the town has declared a housing emergency, which will allow the town to bypass and speed up certain processes within the town’s ordinances. The town is under contract to purchase the former Ruby Bed and Breakfast for $2.3 million to house seasonal workers or locals in housing transition. The town is also working on its Community Compass, which will provide a framework for decision making on community needs moving forward, and looking into an in-deed program, which would allow the town to buy deed restrictions on existing structures.

In Mt. CB, “we do have 77 existing deed restricted units in town,” said Reeb. The town also has 22 units of the Homestead project under construction, expected for completion by the end of this year. However, all existing units and the Homestead units have already been claimed and nothing is currently for sale. The town is also working on its Master Plan, which is aimed to identify needed housing and community essentials.

As far as the county goes, “It’s been a goal since 2016 to build new affordable housing units,” said Pagano. She said the county will have 200 new workforce housing units by the end of 2022. “We are really committed to finding meaningful housing solutions for our neighbors.”

Sinkewich explained that the 76-unit Paintbrush project in Gunnison is currently underway and construction for the Lazy K project is launching this month, which will include 44 owner-occupied affordable units and 21 market rate units. The future Gunnison Rising project has potential for 1,700 total units, with 200 affordable housing units. “The infrastructure work will begin in its first phase later this summer,” he said.

The GVRHA is not a developer, said Kermode, but it works with partner agencies with development and affordable housing opportunities, deed monitoring and in some cases, acts as a property manager. The GVRHA also works to make sure deed restriction regulations are being met.

Based on the GVRHA’s recent 2021 Housing Market Needs Assessment, Kermode said the valley needs 960 units to get us through 2026. Kermode noted that even though 240 affordable units have been added to the housing supply since the last study was conducted in 2016, the valley is pretty much at the same point. “We’re like the hamster on the wheel that just keeps getting bigger and bigger. We’re not catching up with what the demand really is,” she said.

Public opens up with personal experiences
Reich invited the public to ask questions, share their own personal stories and offer up ideas for housing solutions.
Lauren O’Rourke, born and raised here, shared that she and her son have lived in nine different houses since she moved back here six years ago, including one of the one-bedroom affordable units in Stallion Park. “The guy that bought it for $60,000 sold it for $260,000,” she said. “Because somebody foreclosed on that, that deed restriction got lifted. It seems like the rules consistently change… How do we stop that from happening? How do we protect that because that’s what they were built to be. It just doesn’t make sense.”

“Those [Stallion Park units] went into foreclosure during the recession so to get them out of foreclosure, you have to buy them and you have to have the money to do that,” explained Pagano. “We had enough money to buy some but 32 units, no. It’s a hard discussion; it’s a hard decision. That’s part of the complexity of it.”

“We do have systems and methods in place where we get notified when a property has a foreclosure notice filed against it,” said Kermode. “We’re all extremely committed to never terminating a deed restriction unless there’s no other choice, and sometimes that will happen.”

What to do about STRs?
Many attendees asked for more focus on non-building options that could help with short-term solutions, such as considering giving a tax break for those that rent their Accessory Dwelling Units (ADU) to locals. “I’d like to see a shift in conversation to incentivize the people that live here to work here,” said Beth Goldstone. “If you develop more and build more, more people will come.”

Another idea was to reduce the transfer tax and eliminate down payments on deed restricted homes. “We received a grant from the state and we’re going to be able to provide down payment assistance,” said Kermode of a new program the GVRHA expects to implement by the end of the month.

A local named Connor shared that his home was recently sold to become an Airbnb. “Right now I’m living in a camper. Is there a way we can balance vacation rentals with long-term rentals and find some way to fill those?”

Russ said the town of Crested Butte has capped short-term rentals (STR) at 212 units. “Through our licensing process we can be more aggressive to make sure they’re more code-compliant…we can set up the framework to the [Community] Compass and follow due process to fix the market.”

“We are at the 212 limit,” said Reich. “Why do I keep hearing of people getting kicked out of their home?”

“We are one square mile,” explained Russ. “They may be doing it somewhere else in the county.” Gunnison County, Mt. CB and Gunnison do not currently have an STR cap, but all representatives said that was something they could take back to their councils. Reeb shared that Mt. CB is also currently working on an annual assessment of their STR licensing regulations.

Secret Stash and Bonez owner Kyleena Falzone said she owns a triplex that she rents out long-term to locals, as well as several properties she short-term rents. “I do put employees in there in the off-season…but I would have to charge $5,400 a month to be able to pay the mortgage and the property taxes,” she said. “I can’t cover the mortgage on the building if I don’t short-term rent it. How do you incentivize the short-term?”

Camping
Many attendees expressed their concerns about camping no longer being a reliable option based on the new designated camping regulations in place to alleviate the backcountry crowds and misuse.

“The community has done a wonderful job of preserving the open space. We’ve limited the supply of housing, is there a way to use conserved land for housing?” asked Reich.

“We never intended to do this at the expense of what makes this place great,” said Russ.

Reich suggested that the Avalanche Park and Brush Creek parcels that are currently sitting empty could be temporarily used for camping while the town plans for those properties’ long-term purpose. Several others urged representatives to allow camping in town, perhaps coordinating with the CBCS for use of its shower facilities.

“We have a very lonely tent site and we would like people to visit it,” said Reeb. The town of Mt. CB has a 26-tent camping site, with a porta potty, trash and recycling. Currently, the town does not allow car camping, but Reeb said the town would look into possibly changing this.

Falzone suggested that local workers should be able to get a special permit to camp.

“The fact that we’re talking about people having to camp to live in town is absurd,” said Ben Wright. “I’m working five jobs…I haven’t even been mountain biking this summer…my quality of life has gone down the tubes. I’ve been here almost 20 years. As an hourly wage earner I’ve only been able to save $40,000 for a condo just to be priced out. Is it even worth living here anymore? We don’t want to live in tents. How long does it take for a second home sale to get approved versus how long it takes an affordable house to get approved? You have to get these second homeowners and these people moving here right now to invest in the community.”

“Why aren’t we looking at rezoning the land that we already have?” said Amanda Fuhrman, suggesting the lot next to Ace Hardware.

“The Town of Crested Butte can rezone,” said Russ. “That’s exactly what the Compass can do. Changing zoning is not an overnight thing. We are committed to starting that September 22 and 23 in this room. That’s where we can effectively change the zoning.” Russ invited everyone to show up in September to offer feedback for the Community Compass discussion.

“The county is absolutely willing to explore all options,” said Pagano. “We need your voices at the table too.”

#HousingShortage
“There’s a lot of advertising for this valley. People know how to get here. But I don’t see responsible advertising and responsible education,” said restaurant server Martha Keene, referencing the Tourism and Prosperity Partnership’s (TAPP) marketing to visitors and remote workers to move here.

“[Visitors] have no idea what is going on because all they’re seeing is rainbows and pretty pictures and they’re not getting the reality of what they’re traveling here for… You’re getting the people here no problem. We’re not telling them what to expect when they get here.”

“Last year was crazy,” said Pagano, noting the influx of new and inexperienced campers. “We do really want to help educate them and TAPP has been supportive of that.”

“I’m waiting on so many people who have no idea, saying ‘I thought you guys opened, I thought you hit your herd immunity,’” said Keene. “We get people to come here and we kind of fool them a little bit because the waits are so long and they don’t want to come back, but why aren’t we trying to cultivate a wonderful experience?”

“I hear you, Martha, and I’d be happy to pass that on to John Norton (TAPP executive director),” said Pagano.

“Personally, I’d love to get it in the works,” said Kermode. “I haven’t thought about the best way to approach second homeowners yet. They’re approachable and I think we should do it.”

“What we have here is a very simple economics problem based on supply and demand. We’ve all acknowledged there’s no affordable housing,” said Joel Benisch. “Especially the government entities…I implore you to please look at every tool of that nature that you have in our toolboxes that give you the opportunity to cut through or go around all the bureaucratic steps…to get those 900 units by 2026.”

“Things have been tense, we’ve all been tourists somewhere. Let’s be kind,” said the local camper named Connor. “We’re going through growing pains and how we deal with these growing pains will form the future of Crested Butte.”

The audience was encouraged to continue showing up to town and county meetings with input and ideas on affordable housing. The Town of Crested Butte is holding an in-person meeting on June 17 at 6 p.m. at the corner of Sixth and Butte to discuss the Sixth and Butte Workforce Housing Plan.