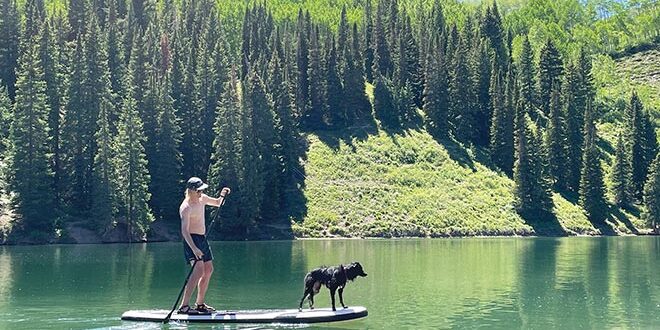 We have a photo this week of a local bedding down in one of the new traffic calming boxes on Whiterock (see page 6). Love it because who doesn’t love the CB smart and funny? Thank you.

One concluding mention in the updated Housing Needs Assessment Survey for Gunnison County basically states that it’s likely some of the people who moved here during the pandemic will wake up and realize this place is hard to get to and doesn’t offer enough urban opportunities. They’ll probably go back to the city.

The report posits that some will stay longer for the rural Colorado benefits of a resort town but many of those will turn tail and run once they go through a real winter or two that is typical up here. You know, the winter that includes -30 temperatures for days or weeks at a time with a high maybe hitting 0; the winter where you’d walk outside and your lungs would burn; the winter where the heartiest of locals stay under the comforter and hope they have enough canned goods and liquor to make it through until February. Anyone who has been here for a decent length of time will swear those were the normal winters in Crested Butte and Gunnison.
That was then. This is now. Hello Global Weirding. Aside from a two-week warm blizzard three or four years ago, we haven’t had one of those winters in a decade or more.

So as I was riding my bike late Monday afternoon I figured the same theory might be applied to our summers. It was hotter than 80 degrees when I started climbing Whetstone Vista after 5 o’clock and as a guy who sweats I was wet on Whetstone. It never used to hit 80 in the summers in CB…ever. And when it started to top that milestone a few summers back, it was a day or two in July or August. Looking at the weather this week, it is supposed to climb toward 85 here and over 90 in Gunnison most of this mid-June week. For maybe the first time ever in this valley, I turned on my car’s air conditioning. I’m getting soft.

Okay, the summer is becoming the true test of local resilience. Can you be outside in the heat at 9,000 feet? If not, will it have the impact the Housing Assessment update predicted and people will flee somewhere else like… uh… Park City (90-degress on Tuesday), Steamboat (93 degrees), Moab (106 degrees), Taos (90 degrees), Fort Collins (98 degrees)? Hey, Juneau, Alaska had a high of only 60 degrees and it was raining!

Face it — despite the rapid changes, despite the challenges, this is a pretty nice place. The winters are getting more chill (in a vibe sort of way) while summers are more red hot (in a vibe sort of way). While not urban, this valley is one of the sweet spots that combines a small town feel with many urban amenities. There may not have been many of those amenities last year because of COVID restrictions but those here this summer will have access to more art, music, lectures and stimulation than most college towns.

I don’t see the pandemic refugees fleeing back to Boulder or Tulsa or Houston. I don’t see tourism drying up because people can flock back to festivals in Telluride. They’ll do both. People’s minds have been expanded because of the last year and that expansion includes here.

But as evidenced at last week’s “Housing Forum” it is clear the expansion is squeezing many of our friends and neighbors. There were many heartfelt stories of the struggle to find a place for working families, single mothers and individuals to live anywhere near the jobs. The forum brought faces to the ethereal concept of a housing crisis. But one of the many takeaways was that there is unfortunately no magic wand solution.

Some suggest the Tourism and Prosperity Partnership (TAPP) should take their entire marketing budget to zero and stop trying to get people here at all. This week TAPP actually made a pivot in that direction…at least for the immediate summer. Big kudos to TAPP for following the example of a post by Travel Crested Butte last weekend. The Facebook post had pretty pictures of the valley of course but the headline and message was that this would be a trying summer given the employee shortage. The post essentially asked visitors to understand the current situation and adjust accordingly. We’ll see if new visitors can embrace that Zen attitude but the effort is a really good one. The fact that TAPP is choosing to pivot from spending public dollars on summer advertising to summer stewardship and reality messaging is a great move and shows they are hearing the community.

It goes to the business axiom of “under-promise and over-deliver.” Over-promising and under-delivering is deadly to any business and I would think particularly the tourism business. Let people know what to expect before they get here and then do a bit better than what they are expecting. Do that and those that feel comfortable in the place (the ones we want to return) will come back.
Those that rub on their genie lamp and think that by completely drying up TAPP, everything will return to 1996 are just rubbing their lamp. This place is waaaay different and 1996 is in the rearview. If you were here then, count yourself lucky.

The fact is, this community has consistently chosen to be a tourist town. Spending public dollars to fight the mine, fund tourism advertising and fund airline seats make that clear. We just don’t want to over-tourism. The real challenge is to do it different. The crisis is that some of the funky minded weirdos that live here and have unique ideas are having to leave given the pace of change. TAPP and Travel Crested Butte just took a “different” step.

At the simplest level, isn’t it smarter to spend more of our money on the infrastructure to make the place work for us — and that means dealing with things like RV dumps, planning for enough classrooms, installing informative trailheads, funding organizations like the CB Conservation Corps, adding more bus trips and providing more places to live for working locals that also need time to play in the place they love. Don’t choose to simply spend all the money on one thing even if it is housing—that choice brings consequences that cannot be ignored. More workers living near CB really does bring the need for more school space and parks and places to park vehicles. Don’t simply choose to be as big and dense as Breckenridge – just go to Breckenridge if that’s your vision. It’s not like anywhere else has enough units for their workers.

The goal of Crested Butte worker housing was originally to spread it out over town so there wouldn’t be islands of workers and pockets of rich people. With businesses suffering and limited land, it appears the new situation is bending that goal. There is a good argument to build more dense apartments for workers. With hundreds of units expected to come online in the valley over the next two to four years, maybe a new primary deed restriction should be that occupants have to show an active pay stub from a job in the valley since that is the evident need. Perhaps set aside some places for long-time workers that are nearing retirement but remain active in the community. That’d be a little different.

And using town-owned properties like the gravel pit and Rasta Lot for some camping doesn’t mean that is the best long-term housing solution. It is a short-term action given the current circumstance. Some people actually like the idea of camping to pay little if any rent and save money but the (legitimate) backcountry crackdown makes that harder. Many RVs and campers now have bathrooms and showers so while it would be nice, there isn’t the absolute necessity to bring them in (okay at least one porta potty). Camping opportunities near jobs might also open up some brick-and-mortar housing for those not inclined to camp.

Look, it’s a changing world. It was close to 85 degrees in Crested Butte and 91 in Gunnison on Tuesday. Norton’s tourism marketing board is shifting from advertising the summer to messaging summer mitigation. Who’d a thunk it?

Not many smart people will leave the valley when they look outside at the other choices so they too are becoming part of the changing community. The goal is to keep making it a good place that is just different enough to attract the smart and funny weirdos with ideas… 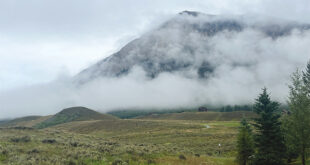