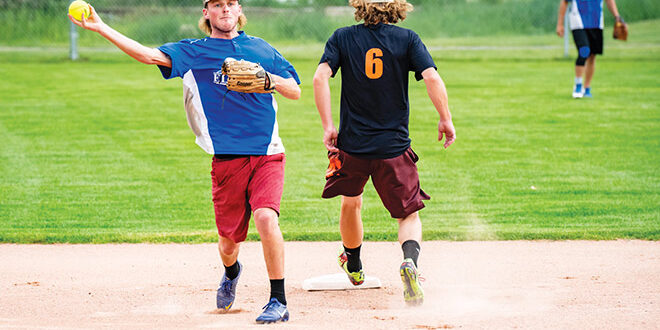 But, after what I witnessed Tuesday night at Gothic Field, Elevate is showing little to no signs of the pressure building and are sharks-with-frickin’-laser-beams-on-their-heads focused on the title.

Sure, they had a slow start and the Eldo was in the game and looking at pulling off a major upset, until they weren’t.

The game started off as expected as Elevate turned a near flawless 1-6-3 double play in the top of the first inning but their bats were nowhere to be found when they stepped up in the bottom of the inning as Joey Reed’s unique pitching cadence kept the Elevate hitters off balance.

Mark Krause then led off for the Eldo in the top of the second inspiring some offense getting dirty for a double. Kristin Tyson carried that energy into her trip to the plate to knock a big league single and then a sac fly from Fulwiler scored Krause for a 1-0 lead.

Elevate tied it up 1-1 with some systemic small ball but the Eldo defense was good enough to hold Elevate in check through two and retake the lead in the third inning. Leak Culkar got things going with an error-assisted single and then scored as Reed crushed a double to the gap in left center.

Elevate answered back but it was a muted response, muted in part by a leaping grab at first by Patrick Cashion and things were still looking good for the Eldo.

But the Eldo needed some bats to back up their gloves and they also struggled with the delivery of Elevate pitcher Christian Allen who is not afraid to test the allowable height limit on pitches.

Matt Savard then woke up the Elevate bats in the bottom of the fourth inning leading off with a towering solo shot. The Eldo stayed tough to get two outs but Elevate officially opened the game up for good with a seven-run, two-out rally.

Liz Wigginton slapped a RBI single down the third base line, RJ Spinella followed with a three-run inside the park home run, Sam Reaman punched a RBI double to right center and Kelly Jones and Savard added two more runs with base hits for an 11-2 Elevate lead.
The Eldo defense recovered to hold Elevate scoreless in the bottom of the fifth but their struggles at the plate continued and they just could not buy a run. Elevate, on the other hand, bought a bunch more runs in the bottom of the sixth inning spraying the field with base hits from right to left and all gaps in between. Reaman and Jones each singled and scored off hits from Savard and Paige Rumery. Savard and Rumery then scored off singles from Brent Chambers and Halston Gage and had it not been for a scooping grab by Culkar in right field, things could have gone from bad to worse. Though it did stay bad as all of Elevate’s hitters stepped to the plate for the second time that inning to continue knocking in runs to pull ahead 21-2 heading into the seventh inning.

The score would stay 21-2 as the Eldo had no more to give and were shown the door to the loser’s bracket. That’s where the real action will be this next week as, thanks to the double-elimination format, teams like the Eldo, the Walk of Shame, the Dingers, the Whetstoners, the Talk of the Town and a few more still have chance to climb out of the loser’s bracket for a shot at the title. Or, a chance to just call it a season and get their evenings back.