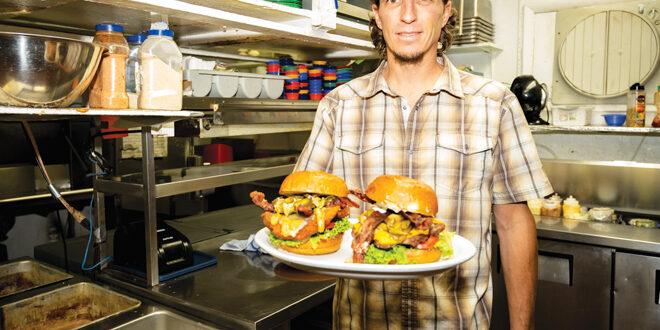 It’s a mix of people, commuters and retired folks, and a little bit redneck,” Mike Spradlin says of Lake Isabella, California, his small hometown near Bakersfield. Living around the largest lake in California, about half the size of Blue Mesa Reservoir, he feels that Gunnison is somewhat reminiscent of his childhood home. “We have the lake, mountains, mountain biking and a small ski resort at 7,000 feet in elevation in the southern Sierra Nevadas,” he describes.

Mike had the opportunity to indulge in a lot of outdoor activities, many involving water sports like swimming, diving off rocks into the lake, jet skiing, fishing on the Kern River with his dad, and catfishing at night on the lake. “With catfishing, you’d have a bell on the rod, nightcrawlers on the hook and you’d sit by the fire and wait for the bell to go off.”

Still in his single digit years, Mike played baseball and youth football but in high school, he says that he just wasn’t big enough to play football. “So I started playing golf. I played high school golf on a six to eight person travel team.” He was talented enough to receive MVP and two varsity letters. He also worked as a “cart kid” at the golf course through high school, which entailed washing the carts and filling the drink stations.

As high school progressed, in 1998, Mike decided he needed a different job. “Summers are incredibly hot, between 95 and 115 degrees. At that point, I wanted something on water. River rafting is a big thing there. We have one of the best whitewater rivers in the U.S.,” he says of the Kern and admits he’s somewhat biased. He tried out to be a river guide and laughs, “And gosh darn it if that didn’t stick around on my employment record for 18 years!” He was 17 and a year shy of the required age to guide class four whitewater trips, but he could guide up to class three while training for the even wilder ride. “So, by the time I was 18, the following summer, I was ready to go.”

He already had over 50 trips racked up when he guided his very first class four river trip, “And I flipped my raft that trip,” he laughs. He continued to guide until he entered California State University in Bakersfield, where, as he describes, “I did the seven-year bachelor’s degree plan.”

During his first year as a river guide, Mike had also picked up whitewater kayaking and he, along with a couple of friends, started his own videography company, filming clients for the five guide companies running the river trips. “The Kern River is notoriously called the Killer Kern,” he tells. “The whitewater is huge. It’ll destroy you. There’s even a tally board with postings of lost lives on the river.”

With his interests in videography production and photography, Mike graduated with a BA in Communications with a focus on digital imaging and video production. He also built websites. However, the world of technology changes rapidly. “My degree became completely obsolete because of the iphone, because it changed everything about website design. I used to be able to write all the HTML code but as soon as the iPhone came out, the process and technology that also came out was all new.”

He remained in Lake Isabella, river guiding and shooting photography but eventually, he says, “I felt it was time for some great life trips,” and he headed to New Zealand for a couple months to visit friends there, and mostly, to kayak, sometimes taking a helicopter to the top of the river to kayak down. He went to the middle fork of the Salmon River in Idaho for a week, and then floated the Grand Canyon. “It was like a trifecta,” he recalls.