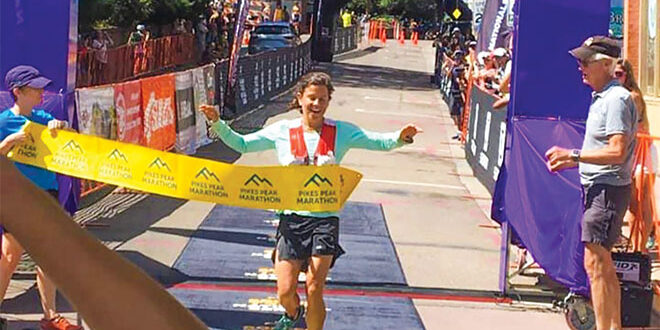 “The unknown is scary”

Crested Butte resident Stevie Kremer is back to her winning ways as she took the women’s title in the Pike’s Peak Marathon Saturday, August 21 in a time of 4 hours, 34 minutes and 45 seconds. She last did the race in 2013 and she won that one as well.

“I got lucky,” says Kremer. “I was 17 minutes slower than eight years ago.”

Back when Stevie Kremer was an elementary school teacher at the Crested Butte Community School, she gained international notoriety as one of the top ultra marathoner and trail running women in the world racking up numerous titles in a variety of events. But, the past three years have been a whirlwind for Kremer with having a kid, switching jobs to become the middle school counselor and COVID pumping the brakes on her trail running racing career.

“Since I had a kid three years ago, I raced a little but not really,” says Kremer. “The logistics of racing with a kid is tough. And then during COVID there wasn’t much racing at all and the past year was rough.”

Kremer still continued running though as it’s really more for her mental and physical state than anything else. About a year ago she shifted gears a bit, not into overdrive, but just to get back to the things she enjoyed.

“After last year I wanted to change things and get back to what I really love,” says Kremer.

Having won the Pike’s Peak Marathon back in 2013, she still had a free entry into the race whenever she wanted and sometime between April and June, she can’t quite recall the exact moment, Kremer decided to cash in on that free entry with some strong encouragement from friend Shari Sullivan-Marshall.

“I was like, I’ll just do it,” explains Kremer. “Shari convinced me and helped out.”

But her training regimen was not quite what it may have been in the past as she could only get an hour run in each day with only two longer runs of around three hours each leading up to the race.

“I run because I love it, not to train,” says Kremer. “I decided I’m going to just do the best I can.”

Kremer found the pace a bit quick at the start and she settled into third place but as she continued up Pike’s Peak on the Barr Trail, she soon reeled in the woman in second place and bumped her way up the standings.

“I just started feeling my pace and felt good about it,” says Kremer.

Her pace carried her into the women’s lead and she crested the top and turned back around in first place with 13 miles of descending to go and that’s when things started to really hurt.

“About four or five miles down I was like, I got to slow down or I might not even finish this,” says Kremer. “You see people coming up and so you know what kind of lead you have but you don’t know what their strengths are, maybe they’re really strong on the downhill. The unknown is scary.”

Regardless, she held off all of her competitors to win the race, a little over three minutes ahead of second place.
“It was the downhill that crushed me,” says Kremer. “My legs felt it.”

With another free entry to cash in on, Kremer is not convinced she’ll line up for the marathon race again but may opt for just doing the Pike’s Peak ascent race instead and she has tentative plans for additional races this fall.

“I don’t know about going down that mountain, but I wouldn’t mind going back up it,” says Kremer. “It definitely got me excited to do more. I don’t miss the nerves but the camaraderie and excitement around the races is great.”