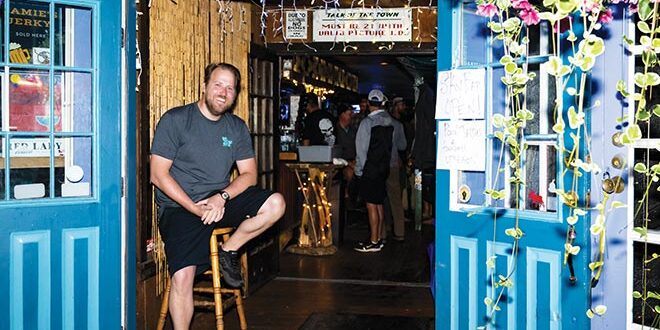 James Newton is a self-proclaimed beach rat, having been born on St. Simon’s Island off the coast of Georgia. Bouncing between there and New Orleans, his father finally settled James and his sister Renee in Wilmington, North Carolina. So now working in Crested Butte is a 180-degree turn from what he grew up with.

The son of a boat captain, James spent a lot of time outside at the beach – surfing, riding bikes and swimming. Because of his father’s work and frequent moves, James says, “I didn’t care for school so much at the time. Growing up, I was always the new kid, so school never really sat well. I was having to meet people all the time, and never really had time to make friends,” he says. James recalls going to three different schools in one semester.

“At a certain point, I just kind of wrote off people. I learned to be alone a lot, not that I was lonely, there’s a big difference.” In Wilmington, James grins, “I was really big into jet skiing, and doing all the things inquisitive teens did back then.” He graduated in 2004.

He got a job working for a dredge company doing beach renourishments, which is pumping sand from riverbeds onto the beach to enlarge it and help thwart hurricane erosion. “I liked being on the beach, but it was 14-hour days in steel toes and a hard hat and it’s pretty hot there. I saved a bunch of money and took some time off to figure out what I wanted to do. I never really came up with an answer for that,” he laughs, so he figured he’d just have a good time and take a break from growing up.

He got his first bouncer job when he was 19, at the Soapbox in downtown Wilmington. “It was a punk venue with hardcore punk rock music and mosh pits. There were so many people on the floor, but there were no major problems there, just the normal throwing people out, people being too aggressive, hitting people outside of the mosh pit and you don’t do that. It’s a different breed,” he muses.
But the sea called him back and he started working on a tugboat along the Hudson and East Rivers along the New York coast. “We did channel deepening for cargo ships, and moved recycling, trash and scrap metal to cargo ships, which they’d then take to China for sorting because it was much cheaper than doing it here in the states,” he explains. “We lived on the tugboat. We had a crew of five and we’d be on there for two to three weeks at a time. This job made the bouncing job look safe,” he says. “It was just dangerous. I’d be working in -20 degree weather in a snowstorm at 4 a.m., six hour shifts with six hours off, so midnight to six a.m. You’re walking alongside barges that are covered in ice, tying lines up, making sure the captain can see ahead, because I’d be his eyes,” he explains.
James says the tugboat would be pushing a 240-foot long barge and he’d be positioned on the bow looking out. “The weather up there is crazy– ice storms, snowstorms, and you’re on the water. Salt water doesn’t usually freeze when it’s moving but when the spray hit the barge, it would ice over. I’ve been cold here in Colorado but never as cold as I’ve been on the boat in New York.”

He withstood those elements for three years and then decided it was time for a change. “I was running myself ragged. I had money saved, but my health wasn’t good. It’s a rough life out there. I can’t tell you how many times I almost died when lines snapped, tied up to a barge in bad weather and they’d just snap. So you’ve got a 60-ton boat carrying a massive amount of cargo weight and the cable snaps, it can kill you. You can hear when it’s about to happen and you get the f— out of the way.”

His sister Renee had already moved to Crested Butte, so James headed west too with the idea of growing the Colorado green gold, which he did for many years with his medical license, selling to dispensaries through 2017.

He had visited Renee on vacation in February of 2010. “It was my first time in the mountains, having never been west of the Mississippi. I fell in love with it immediately. I had such a good time. It was completely different than growing up on the beach. I had started snowboarding at 16 when we took family vacations at Snowshoe, West Virginia, which was like skiing on ice,” he recalls. “When I arrived to snowboard here, it was absolutely insane! The mountains are huge. It was a new sense of awe. I had never seen that much snow.”

James got hired on as a Kochevar’s bouncer when Jason Vernon took over the saloon in 2012. “Bouncing there was like night and day,” he compares his previous punk club bouncer days. “There were no mosh pits. I didn’t have to deal with military people from Ft. Bragg, and the work environment and the scenarios were different. I mean, there were still problems at Kochevar’s. I’ve been stabbed and had knives pulled on me,” but he smirks and calls those aggressors all amateurs. “But I was lucky it didn’t puncture anything.”

He compares it with being the new kid at school when he was growing up. “I never went out looking for problems and I’d much rather talk it down than escalate but I’m not the type to back down either. I’d rather deal with a conflict than let a patron at the bar have a bad night. I just like to make sure that people are having a good time and everybody’s safe. That’s my thing.”

Just to change up the scenery, James took a second job at the Talk of the Town in late December of 2017. “Kochevar’s has always been the earlier night crowd and more tourists, and the Talk has always been the late night crowd. It’s been a nice change since Mary Boddington took over. She’s cleaned the place up a lot and made it more comfortable for women to be at, and for more people in general.” Recently, James took a position running security for all the events at the CB Center for the Arts and he’s pretty happy about working music events again. “It brings a different type of person out. It’s not just sitting around drinking, it’s people listening to music. And I’m not there till 4 a.m.,” he says.

James recalls that finding a place to live when he moved here a decade ago was no big deal. At first, he lived with his sister and then an opportunity came up in 2014 to move to Lost Canyon in Almont. “I have the best landlords ever. I got really lucky with that. It’s a beautiful spot and my landlords said as long as I want to rent it, I can stay. I’ve known so many people who had to leave because they don’t have anywhere to live. Living in their cars in the winters, it’s rough. This town has an insanely high turnover rate for residents, like they move here and can’t sustain it and have to leave. Obviously, we need more housing. At this point it’s been more tourists coming into town and less locals able to afford living here or don’t have anywhere to live. Not many people can float $3,000 for a two-bedroom house. It’s not sustainable at this point. Now you have businesses closed two to three days a week because they can’t run full hours. It’s sad to see.”

These winters, James has traded in his board for sticks. “I like it better than boarding, I love to ski.” Summers find him once again outside, doing all the things he loved to do as a kid growing up on the beach. “I love doing anything on the water, rafting, SUP boarding, just hanging out by the water.” And he claims Crested Butte as his home. “I grew up moving around a lot and I never really had a sense of community. Now, doing what I do, I’ve met so many people and made a lot of good friends. And I’ve also got a couple people who don’t like me at all,” he laughs. “But it’s the nature of the job. I’ll be that guy. I’ve been called worse names by better people and I’ve found a way to not take things personally. I can’t come home and dwell on it. You have to be able to put it aside.”