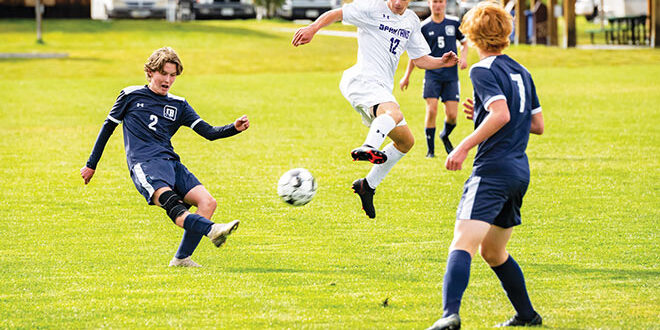 Crested Butte Titans edge out wins over Telluride and Salida

“I always say it, it comes down to grit”

The Crested Butte Titans boys soccer team was handed their first true test of the season and barely passed as they edged out a 3-2 win over the Telluride Miners in overtime on Friday, September 24.

The Miners and Titans have a long-standing rivalry with their matches often coming down to pure grit as the determining factor and Friday’s game was no different as both teams were running on high octane fuel through the entire match.

Telluride opened the game setting a furious pace with high pressure up the field handcuffing the Titans possession and playing balls immediately to their center striker. The Titans’ defense held on through the opening 15 minutes while their attack turned one-dimensional allowing the stout back line of Telluride to hold off any cohesive Crested Butte attack.

The rest of the first half remained a collection of disjointed attacks from both teams with the midfielders battling to try to establish control and the two teams entered halftime notched in a scoreless draw.

“Telluride came out hard,” says coach Bob Piccaro. “Both teams had their chances but neither capitalized.”

The Titans opened the scoring in the fourth minute of the second half when Jacob Bernholtz fought through a couple Miner defenders and found Grayson White open at the top of the six-yard box. White slipped behind a Miner player to find the right seam and drove his shot into the Telluride net for the 1-0 lead.

But, with the Miners’ homecoming crowd loud and proud, Telluride answered almost immediately to tie the game up. Five minutes later, Telluride struck again to take a 2-1 lead.

“The momentum definitely was swinging Telluride’s way and we were a bit panicked and it felt a little like it may have been slipping away,” says Piccaro.

In classic rivalry fashion though, the Titans struck back five minutes later when Nathan Sawyer drove a shot from just outside the 18-yard box into the low corner to tie the game 2-2.

“That was an enormous goal, absolutely great low shot, finally a quality pure shot on goal from some distance,” says Piccaro. “It definitely helped quiet the crowd and stall Telluride’s growing momentum.”

Back to even soccer, the teams returned to more erratic and physical play trying to wear each other down. The Titans then got hit with another setback when their centerback was issued a red card in the 60th minute forcing the Titans to play a man down the remainder of the game.

“I thought we were cooked,” says Piccaro. “We were already missing key players with players being asked to play hard and cover more space, and then we lost our centerback. Initially I thought it spelled doom in my mind.”

But the Titans dug deep and their continued work by the back three and Ace Gaither and Brendan Hartigan in midfield managed to keep the tie in place sending the game into overtime.

At that point, the odds were definitely in Telluride’s favor with Crested Butte playing a man down and the homecoming fan base at full strength supporting their team as they took the field for the first overtime with the first goal winning the game.

Nothing much changed in the style of play from either team as the game would most certainly come down effort and resilience, which both squads brought to the overtime. It wasn’t until six minutes into the first overtime that the outcome was determined as Ben Barney played a quick throw in to Hartigan. Hartigan passed it back to Barney and he sent a cross over the 18-yard box. Sawyer got on the end of the pass, settled the ball and played it into the six-yard box for Bernholtz to punch it in for the win.

“I always say it, it comes down to grit,” says Piccaro. “We held off numerous attacks on us, and when we were a man down, we actually wore them down with our tenacity as a team, our players were not to be denied. It helps that we have a sick goalie who can keep us in and win games.”

The Titans returned to action to host the Salida Spartans at Rainbow field on Tuesday, September 28. Salida has had a stranglehold on Crested Butte for years and provides Crested Butte an opportunity to see what needs work in a non-league match up.

This match was no different as Salida’s defensive shape and cohesion at midfield caused the Titans problems through the first half and the teams were tied 0-0.

Crested Butte finally broke through as a pass from Trent Pulliam found Bernholtz with a step on the Spartan defense and Bernholtz clipped the ball past the Salida goalie. Five minutes later, Bernholtz scored again with a header off a set piece from Sawyer and the Titans held on for the 2-0 win.

Crested Butte has the rest of the week off but returns to action on Tuesday, October 5 when they host Caprock Academy at Rainbow Field at 4:30 p.m. 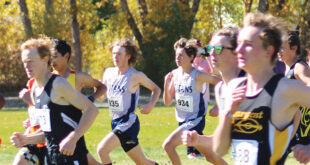 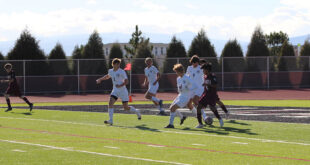 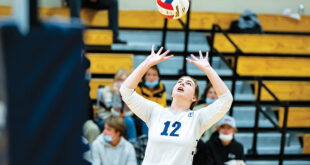