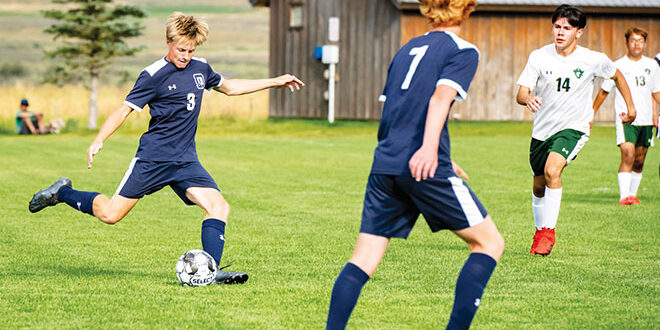 “We gotta keep the machine going and keep improving”

The Crested Butte Titans boys soccer team held off an uptick in energy from St. Mary’s in the second half to edge out a 2-0 win at Rainbow field Tuesday, August 31.

The St. Mary’s Pirates are another 3A school the Titans face early on in the season having played Basalt and Aspen last weekend, and St. Mary’s on Tuesday. They will continue that trend on Friday when they hit the road to play Manitou Springs.

“I find it fortuitous because I’d rather we start the season against non-league opponents to get us ready for league play,” says coach Bob Piccaro. “It’s a really good way to show where we are lacking and where we’re good against these bigger programs.”

The Titans took advantage of a St. Mary’s mistake in the first three minutes of the game when Blue Gardner pressured a St. Mary’s defender and poked the ball loose. Jacob Bernholtz swooped in to gather the free ball and fired it past the St. Mary’s keeper for a quick 1-0 Crested Butte lead.

“I think it was the result of sea legs on their part, getting off a long bus ride and not ready for the game,” says Piccaro. “We just hopped on it and it’s always great to score the first goal.”

Crested Butte continued to press looking to capitalize from quick passing and movement off the ball. The defense struggled in their distribution early on but eventually started pushing the ball wider and quicker, which started to open things up down the middle.

The effort paid off 15 minutes later as a series of quick passes left Bernholtz with the ball 45 yards from goal and the St. Mary’s defense playing high to pressure. Jamis Matlock saw a seam through the back line and made the initial run and Bernholtz slipped the ball through for Matlock to finish.

“Jamis made a great run and I think St. Mary’s got caught ball watching,” says Piccaro. “We could have had more of those if we had a better first touch.”

As the game continued, St. Mary’s shook off the bus ride and started causing some trouble for the Titans. The Titans back three did a great job of stemming the St. Mary’s attack and goalie Cedar Fessenden was quick to scoop up through balls and made a couple key saves to help hold the 2-0 advantage heading into halftime.

“Things worked well when we worked the ball quickly to the flanks to get the flow going,” says Piccaro. “It was dribbling and slow passing that damaged us. We had really good runs up top we just have to get the ball to them quicker.”

St. Mary’s came out in the second half looking to chip away at the Titans’ two-goal lead. An increase in ball pressure and energy from St. Mary’s had the Titans struggling to link any attack together and started to wear Crested Butte out. Adding insult to injury, the Titans continued to struggle to put shots on frame as chances sailed wide, high or dropped comfortably into the St. Mary’s goalkeepers’ hands.

“As the game wore on, they were more in the game,” says Piccaro.

The work of Crested Butte’s back line on balls in the air and the standout work of Fessenden in net proved the difference in the end as Crested Butte held on to finish off the 2-0 win.

“They came out harder and we started to look fatigued,” says Piccaro. “We let them stay in the game.”

Crested Butte will continue to push their limits as they head to Manitou Springs for a game on Friday, September 3. It’s another 3A non-league challenge for the Titans before they step into league play.

“I’m sure they are good so we have to tighten up some things,” says Piccaro. “We gotta keep the machine going and keep improving.”