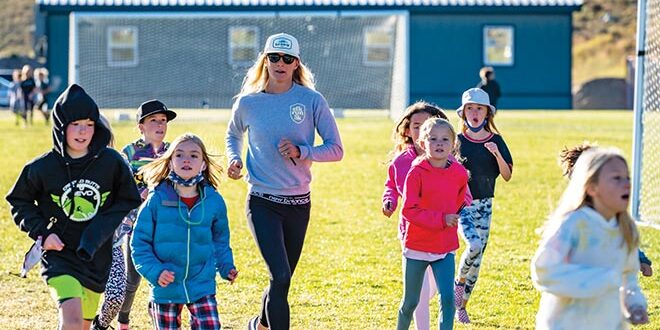 MORNING MILE: Local Olympian Emma Coburn joined some CBCS students in a new before school program called the Morning Mile last week. As part of the program, students are welcome to arrive at school at 7:45 a.m. to walk or run around the soccer field. The kids earn running shoe charms for every 5 miles they complete. photo by Nolan Blunck

Guiding the winds of change

The winds of change began blowing this week so that means the fall color is in thinning mode. But it’s been a weird year that appears to have started late with some lingering green so that might mean even with the wind, we could get bonus October gold. Let’s hope so. But no matter what, we all know that it doesn’t last long so if you have the chance — get out there, even if for a few minutes. Your soul will thank you. Close the store and run up to the Woods Walk for 20 minutes. Instead of going home for lunch, hop on a bike and ride the Lower Loop. Postpone the Zoom and step away from the screen and breathe in the Budd or Baxter’s. The gold in this town is literally out the back door…but it won’t last much longer.

One of the best feelings is driving the right way on Highway 285. Popping to the Front Range on Thursday, the majority of cars were heading into the mountains and the traffic was heavy heading west. On Sunday coming back to the valley it was busy to Bailey but nothing but sunshine and a few RVs heading back toward Fairplay as we hit South Park. As the Frangers stopped on top of Kenosha Pass to see some color, all those vehicles and more that headed west pre-weekend were on Sunday heading back to the suburbs. The line of traffic was literally stopped from the pass to that little town of Jefferson. Ouch. Another reason to appreciate where we live is that going against the grain pays benefits.

There is certainly no shortage of people out there. I know we think it’s crowded here but holy moly, take a run on I-25 for any distance, any time of the day if you need company. Who are these people? Don’t they have jobs? Apparently not as it’s pretty much bumper to bumper out there 24/7.

Colorado added nearly 745,000 new residents since 2010, a 14.8 percent increase and more than 43 other states. Some of them come to the mountains but most stay on the Front Range near Denver, Boulder and Colorado Springs. Still, the growth there has pushed some of the old timers to the Western Slope. We are seeing that here and it’s not a bad thing as long as those coming here don’t bring their big city attitudes. The ones I’ve met haven’t. They like what the place offers and don’t want CB to turn into Lyons. They appreciate the place for what it is, which is not a mall with a Macy’s but an opportunity to walk out the door and hike in the aspens.

As a reminder to those who are new here – and all of us really who might get caught up in the new busyness — slow down. Look up from the cell phone. Wander softly into the woods.

Looking down at the cell phone while in Denver (I was in the city after all), I saw that Saturday morning at Third and Elk looked like the Fourth of July. Emma Coburn’s Instagram showed throngs of smiling people ready to run for Living Journeys. And they did. The comments on Facebook after indicated an event that brought joy to a lot of people. You can’t ask for much more than that. The fact it attracted a bunch of high school cross country teams excited to get high fived from one of the country’s most famous Olympic runners was another benefit. It just appeared to be a great event that has evolved organically from one of the village kids that helps one of the valley’s organic non-profits. Great stuff comes from sincere and organic effort.

Talking recently to another guy who has been in the valley for decades, we agreed that the unique access opportunity is still one of the best things about the quickly changing place. You don’t have to drive 30 minutes to a trailhead. You can hop on the bike and be deep into the woods and by a river within minutes. In the winter, the skiing is a 12-minute bus ride away. That is not the case everywhere and amongst all the changes, we should remember the good. Of course, it is that good that is attracting more and more people here and driving up prices more and more. But for those lucky enough to be living and working here right now, don’t forget to take advantage of the things that brought you here and are unique to the valley.

Taking that advice Monday, I was able to get out on Strand Monday morning with my kid. He told me that Crested Butte is now one of the places all the Instagram influencers are putting on their list. They come here to take a photo of the small town and beautiful valley. Instagram is apparently filling up with gorgeous men and women dancing and prancing in front of our gorgeous and identifiable mountain. His view was that that is what will drive the next wave of people here. Great.

We can all feel the winds of change, both big and small coming to this valley. Real work is being done to try and guide the change because a finger in the dike isn’t going to stop it. Housing for workers near their jobs matters. Collaboration for regional backcountry management matters. Not being afraid to pivot from plans that perhaps didn’t work as well as intended (hello Elk Avenue one-way and nearby parking rules) matters. Welcoming and being inclusive of a broad community that loves the place, matters.

Like it or not, we can expect more people to join us here. It’s what we do to help them understand the place and be part of the community that will maintain our unique foundation. Slow down. Get out in the gold while it is still here. Appreciate the community for what it is. Understand that to really be part of the place means more than taking an Instagram photo in front of the Butte. Get out into it…and there are few better times than now.