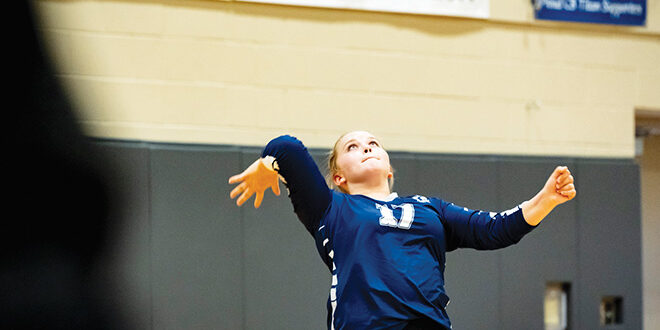 It seems every time the Crested Butte Titans volleyball team takes a step forward in their workouts and rotations, they hit another bump in the road.

Such was the case on Friday, September 17 as they were loading the bus to head to South Park to face the South Park Burros.

“About 10 minutes before the bus was to leave, I found out one of my varsity players couldn’t make the game,” says coach Cierra Abbott. “That was a shock. The lineup we had practiced all week we couldn’t use.”

That left Abbott to do some work on the bus ride to South Park to find a new lineup for the match and get her players to relax and accept the last-minute change.

The Titans struggled in the opening set of the match to find their feet with the new rotation dropping the first set but soon gained some confidence as the match wore on. Crested Butte won the second set but then dropped the third set.

“We fell behind too much in that third set but started to get going and that continued in the fourth set,” says Abbott.

The Titans battled back to win the fourth set and force a fifth and final set. The fifth set is always intense as rather than playing to 25 points, the teams play to 15 points leaving little room for error.

Unfortunately, the Titans fell behind by eight points in the fifth set. Crested Butte fought back to close to within two points but South Park rallied one last time to win the set and the match.

“It was a very winnable match,” says Abbott. “We just made more errors than they did. Our serve errors caused issues and it really just comes down to consistency from the service line.”

Hayes Freeman led the team with nine kills, five aces and was their most consistent passer while Blakeley Reynolds added in eight kills.

The season has taken a toll on the Titans and Abbott opted to give her girls a break from workouts to rest and recover returning to the floor for practice on Wednesday hoping a couple of more players return to the line up from injury.

“I told them to take some time to do what they need to do,” says Abbott.

The Titans then host Monte Vista on Thursday, September 23 in mighty Mt. Olympus at 5 p.m. and then return to the road on Friday, September 24 to face Telluride.