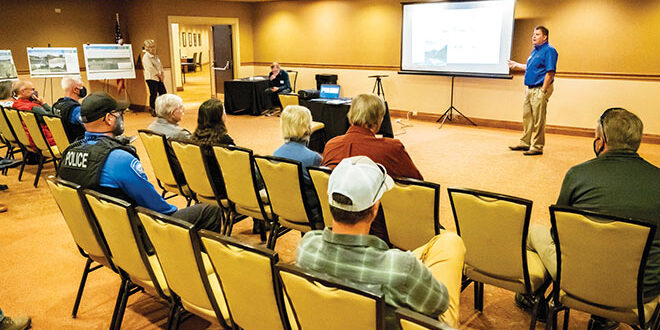 If a roundabout or traffic light is destined for the Brush Creek Road/Highway 135 intersection at some point in the future as a response to increased traffic in the area, the very beginning of such a process has just taken place—and it is far from being decided.

Gunnison County and the Colorado Department of Transportation (CDOT) have taken a first step toward making potential intersection changes at Brush Creek Road and Highway 135 in response to more build-out in the area and chronic winter maintenance and safety challenges. The county and CDOT hosted a design concept open house on Thursday, October 7 to gather input from the community, and based on that feedback a third-party firm will continue analyzing and building possible suggestions for the intersection whether using a roundabout, traffic signal, frontage road and/or median (requiring a U-turn) there. The county will hold a second public open house sometime this winter to present possible solutions, but any actual recommendations would likely come after the Whetstone affordable housing project is further along and the project would require major investment from the county alongside grant funding from CDOT.

Gunnison County has hired the firm Mead & Hunt, a national group with offices in Denver, to evaluate the intersection and potential design improvements. Traffic consultant Jim Charlier reviewed why the county is considering changes to the intersection. He discussed continual development and population growth, and how the increase in traffic at a relatively high speed (55 mph) along Highway 135 interacts with merging and turning lanes to and from Brush Creek Road.

Gunnison County Public Works has also long struggled to maintain Brush Creek Road in the winter due to the road’s slope, an adjacent culvert and snow and ice build up. The county and CDOT have considered minor improvements before but never been able to fully address the problem.

Mead & Hunt representatives presented data from CDOT showing that from 2015 to 2020 there were four accidents at the intersection, and all occurred during winter months and snowy conditions. None have been fatal. Gunnison County public works director Marlene Crosby said it isn’t that the intersection had proved deadly so much as dangerous, and “near misses” have been the theme.

Mead & Hunt began its own traffic study in August and observed daily peak traffic in both directions occurring from around 7 a.m. until 6 p.m. The highest volume of vehicles was observed on Friday evening, August 6, with up to 900 vehicles per hour from 4-6 p.m. The next highest volume was Saturday morning, August 7, when about 725 vehicles passed through between 11 a.m. and noon.

CDOT has predicted future traffic projections at a rate of 1.22 percent per year, and Mead & Hunt predicted potential local development of 275 to 325 housing units between the county-owned Whetstone parcel across from Brush Creek on Highway 135 and the Brush Creek’s parcel of land co-owned by the county, Crested Butte, Mt. Crested Butte and Crested Butte Mountain Resort. Total new vehicle trips through 2045 could be up to 6,000 per day, according to the firm.

Paul Silberman from Mead & Hunt asked attendees for their opinions on intersection re-designs to improve safety, pedestrian/multi-modal access and winter maintenance with these numbers in mind. Potential intersection design changes to consider included a traffic control signal; a roundabout; continuous tee; and restricted crossing. These could include features such as a median, a pedestrian crossing, roadway realignment and a frontage/parallel road.

Some attendees were not in favor of adding traffic lights or crosswalk signals, saying it wouldn’t fit with the character of town. But as Crested Butte mayor Jim Schmidt put it, “I’m not crazy about the idea, but it may be the best solution there.” There was some support for a frontage road or a roundabout. Several major aspects that had not been factored into the firm’s initial evaluation were the affordable housing units that the town of Crested Butte is planning, a sizeable new planned unit development being proposed in Mt. Crested Butte and the unknowns of future growth in the Brush Creek area with affordable housing, school district or community facilities all under consideration. Schmidt said the four entities involved in Brush Creek have a meeting planned in the coming weeks to revisit ideas for that parcel.

Crosby and Silberman emphasized that they were there to listen and learn from community members, and that they have no concrete recommendations yet. Both said they would consider what they learned about people’s preferences and about additional planned developments in the North Valley that would add vehicle traffic to Highway 135 and to Brush Creek Road. The next steps are continued analysis, developing additional possible intersection layout alternatives and then a second (virtual) open house this winter. If this project goes through a full design approval process, Crosby noted that it would take significant funding from the county and state grant funds as well.

“We do not expect this to happen quickly, if at all,” said Crosby.