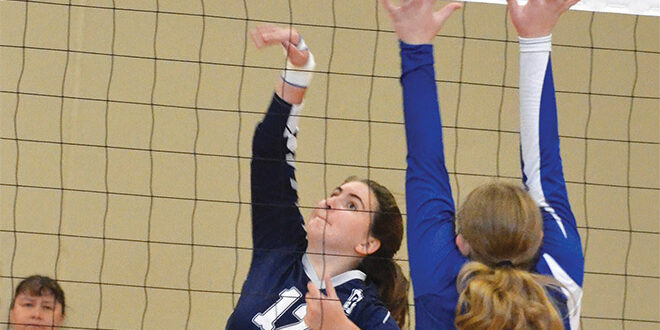 The Crested Butte Titans volleyball team dug deep to battle through three matches over two days but still fell short of sealing a win despite their heroic efforts.

The weekend started at home on Friday, October 1 against the Del Norte Tigers. After dropping the first two sets to Del Norte 25-19, 25-18, Crested Butte rallied hard to win the third set 26-24.

“We had a mid to late game push to close the gap and stopped them from having any runs,” says coach Cierra Abbott.

Unfortunately, the Titans were unable to continue their momentum in the fourth set falling 25-11 to lose the match.

“I think Del Norte just got smarter and we had a tough time serving the whole match and that really did us in,” says Abbott.

The team then boarded the bus Saturday, October 2 for two matches in Creede opening the day with some more news about missing players. As they boarded at 6:30 a.m., Abbott told her team they would be missing their setter and another key player to SAT testing for the day.

“I had to do another last minute line up change and called on Hayes Freeman to be a setter which she has never done,” says Abbott. “But, she’s always up for a challenge.”

The Titans then got another surprise when they arrived in Creede. They thought their match wasn’t until 11 a.m. so when they arrived at 9:45 a.m., time was on their side. Only problem was, their first match time was actually at 10 a.m.

“They had 10 minutes to get ready and we couldn’t walk through the new rotation,” says Abbott.

Regardless, the Titans stepped up to the challenge to win the opening two sets 25-20, 25-19. But as the match wore on, the changes took their toll on the Titans as they lost the next three sets to lose the match.

“I’m proud of them for fighting to five sets and they did the best they could,” says Abbott. “Having that rotation was strenuous and can cause a lot of frustration and that can have a huge impact.”

Crested Butte closed out their three-match run against Ignacio who was coming into the day ranked 11th in 2A with a record of 7-2.
“They’re a really strong team that had at least four inches on us in height,” says Abbott.

After a five set match to start the day and with players in new positions, the Titans did not have enough in the tank to put up a fight with Ignacio and ended up falling in straight sets.

“Ignacio is a phenomenally strong serving team and our back row stepped up but it’s hard against a team like that,” says Abbott. “I think we were frankly just tired.”

Crested Butte has one more match before the October Break and then Abbott will use the week off to give her players a reprieve before returning to action.

“I want them to take the week to rest and get a mental reset, it’s been a long, grueling season,” says Abbott. ”Come back and almost start with a clean slate.” 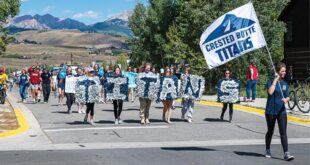 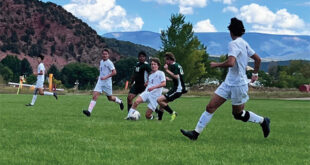