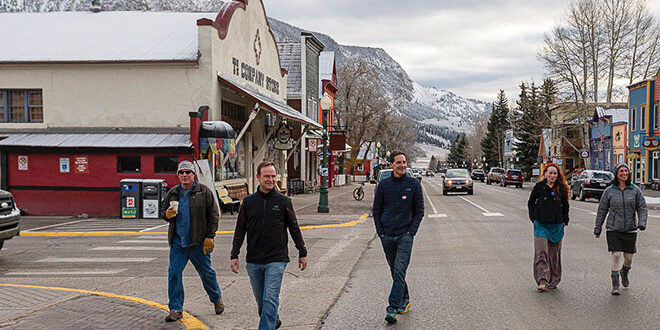 As expected, voter turnout in Gunnison County was not anything like last year’s presidential election but with a Crested Butte town council election on the ballot and several proposed tax issues, 6,061 people came out this October and November to cast their ballots. Many of them waited until the official Election Day on Tuesday, November 2.

In the end, the tax issues were split as the Crested Butte Community Housing Tax, ballot question 2C, was defeated by a vote of 448 to 344. That question also included a .5 percent increase in town sales tax (groceries excluded). Money raised would have gone to the town’s affordable housing budget fund but the question was very controversial with locals and second homeowners alike. In a related tax increase proposal, voters did approve ballot question 2D that increases the excise tax on short-term vacation rentals from five percent to 7.5 percent. That vote was approved by an overwhelming 594 to 199.

Ballot issue 6A that raises property taxes in the North Valley to pay for a new Crested Butte Fire Protection District (CBFPD) fire station was approved by 53 percent of voters, 1,216 to 1,065. The measure will also fund a new Mountain Rescue facility on the land in the new Slate River subdivision along Gothic Road.

Council members
In the race for town council positions, Ian Billick came out on top for the mayor’s position over former town councilmember Kent Cowherd with almost 66 percent of the vote, 505 votes to 261.

Because of a rash of resignations over the last couple of years, six people were running to fill four seats on the council. Jason MacMillan who received 556 votes led the top four council finishers. Coming in second was Crested Butte native and self described radical redhead Anna Fenerty with 475 votes and third was Beth Goldstone who tallied 455 votes. Those three will receive four-year terms. Fourth place finisher, incumbent Chris Haver, garnered 449 votes and will take a seat for two years before having to run again along with current councilmembers Mona Merrill and Mallika Magner. Rounding out the field were Shaun Horne and Jasmine Whelan with 366 and 353 votes respectively.

Billick will be replacing longtime Crested Butte councilmember and mayor Jim Schmidt. Billick said his goal is to build on community as rapid changes occur in the valley. “It’s a privilege to be able to serve as the town’s next mayor—big shoes to fill,” he said Wednesday. “My sense from the election is that CB really wants to build our community—ensuring not only that we can house essential community members but that people have flexibility in housing as their lives and circumstances change. It is also clear that we are embracing our second homeowners, many who have been here across decades and generations. We’re going to have to work together to build upon and enhance our community as we go through change.”

MacMillan said he is thrilled to be on a council with such depth. “I am very excited to have been elected to this new and dynamic council,” he said. “With Ian at the helm, the experience of Chris, Mallika and Mona, and the passion and perspective of Anna and Beth, we are set up for a productive and transformative time on council. I am hopeful we can continue our progress on climate, housing and transportation, while maintaining our values and staying true to the spirit of this community.”

Fire/Mountain Rescue
On the fire district’s mill levy approval, CBFPD CEO Sean Caffrey said the support is appreciated. “On behalf of the membership, the Board of Directors and the leadership team of the Crested Butte Fire Protection District we would like to thank the voters for approving our general obligation bond measure,” he said. “We appreciate the input provided by all of the voters regardless of how they voted and owe particular thanks to our constituents in unincorporated Gunnison County, the Town of Mt. Crested Butte and especially our Colorado non-resident property owners who came out in significant numbers to support us. We are optimistic we will be able to borrow less than the $25.95 million authorized by the voters to advance the project. The new facilities will allow us to provide prompt and reliable emergency services to the core of our District with volunteer and paid professionals for decades to come.”

Mountain Rescue team member Kemble Widmer added that the new building funded through the tax will be a huge improvement for Search and Rescue. “The Crested Butte Mountain Rescue Team thanks our beloved community for its vote to pass 6A and grant us a new headquarters building,” he said. “On those long nights away from family in difficult and occasionally dangerous situations, it’s an incredible comfort to know our neighbors have our back. Put simply; your vote and this new building makes us safer. We also thank the Crested Butte Fire District for allowing us to be a part of this project.”

Taxes
On 2C, the Community Housing Tax question, Haden and John Spencer helped lead the opposition to the measure given what they viewed as its divisiveness. They said they, along with many second homeowners, were relieved to see the results and hoped a renewed effort to address the workforce housing issue collaboratively could now take place. “We believe the results on 2C show a rejection by voters of a tax that was divisive and a rejection of a flawed process with no clearly identified plan on how to use funds raised by taxes,” John and Haden commented in an email Wednesday morning. “There is an undeniable need for more affordable housing in the Gunnison Valley. It is time for EVERYONE to participate in finding solutions and we are committed to being a part of new efforts and will encourage others to help and commit to being involved as well.”

By a 55 to 45 percent margin, Mt Crested Butte voters decided it was a good idea to keep term limits on their councilmembers.
The closest race in the county came in the Gunnison County Fire Protection District property tax increase issue. Just nine votes determined the outcome as voters rejected the mill levy increase 1,013 to 1,004.

Gunnison County Clerk Kathy Simillion said this year’s election was a smooth one but almost half the people waited until the last day to vote. “On Monday November 1 we had just over 3,000 ballots,” she said. “And then on Tuesday we processed just right under 3,000 so you can see how voters were waiting until Election Day to cast their ballot. Again, this holds up results until later in the evening but the process stays the same, so no matter how heavy we are hit, no shortcuts are taken!”

Simillion reminded voters to make sure their address is current and they receive the correct ballot since next year the county will be running both a primary and general election.