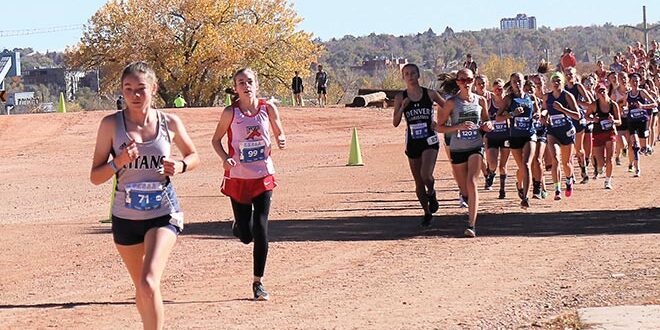 Seven members of the Crested Butte Titans cross-country team made the trip to the 2A state championships in Colorado Springs on Saturday, October 30 and two runners finished the day in the top 10 as senior Connor Williams placed second in the boys race and junior Ruby Pendy took 10th place in the girls race.

The course in Colorado Springs is a great venue for runners as it has its fair share of flats, climbs and descents that can be challenging to manage for an entire five-kilometers.

“Fast times can be run even though it’s really hard,” says coach Shari Sullivan-Marshall. “Each mile has a variety of elevation and makes for a lot of strategy.”

Goals for the Titans were across the board at the big event with Williams and Pendy looking to compete amongst the state’s top runners while other Titans were closing out their careers and some were just getting their first look at the state championships early in their high school careers.

“We definitely had a novice group,” says Sullivan-Marshall. “Only three of our runners had raced at state before.”
The day opened at 9:40 a.m. with the boy’s race and Williams in the mix for a potential title run. He opened the first section of the course in the lead group with six runners but as the race continued, Williams and two other runners pulled away to battle it out for the top spot.

“They would put in surges and separate but would always regroup,” says Sullivan-Marshall.

As they came into the final 400 meters, including one last quick climb, Williams was sitting in third place but kicked hard in the end to catch the runner in front of him on the last climb and cross the finish line in second place, a step up from his third place finish last year.

Freshman Jake Pendy was the next Titan to cross the line coming in 38th place, second among all freshman, running a minute faster than he did on the same course earlier this season and proving he has a bright future ahead of him.

“He ran smart because it could have been easy for him to blow up,” says Sullivan-Marshall.

Seniors Cormac Billick and Porter Washburn were the next two Titans to cross with Washburn closing out his third championship race out of four years.

“It’s something he should be proud of,” says Sullivan-Marshall.

Freshman Giles Billick and sophomore Ethan McCombs got their first look at a state championship race and spent their time on course running together to push through the race.

“It was great for both at their first race to stick together,” says Sullivan-Marshall.

The boys team finished the day 12th out of 20 teams and were the top team from their region getting revenge on Ouray who beat Crested Butte at the regional race a week earlier.

Pendy then lined up for the girls race and the coaches made sure she stayed within her pace to remain a contender for the podium.
“She’s an aggressive runner and we warned her not to try and run with the top three but look at the second group,” says Sullivan-Marshall. “The goal was to get back on the podium.”

Pendy did just that as she remained in the hunt for the podium the entire race and posted a time 35 seconds faster than her effort at state last year to take 10th place and get on the podium for the second year in a row.

“She ran really aggressive and really strong and it was awesome to see her back on the podium,” says Sullivan-Marshall.

The team will lose four seniors to graduation but Sullivan-Marshall believes the foundation for continued success in the future is firmly in place.

“Our future looks bright,” says Sullivan-Marshall. “I think we’re going to have one of our largest rosters in a while next year and the culture of this team really upped it’s game this year. It’s exciting to see the upswing.”