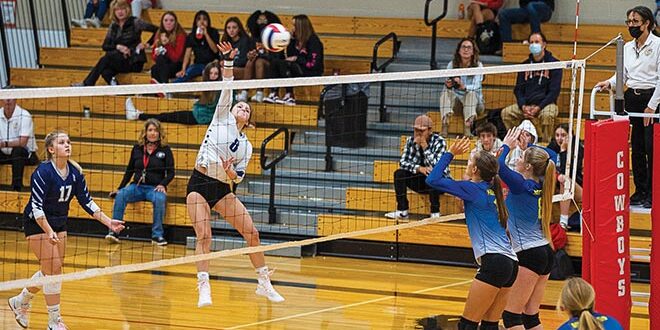 It’s been a tough season for the Crested Butte Titans volleyball team as coach Cierra Abbott and the players had to adjust almost every single match all season long.

Whether it was injuries or illnesses, or what have you, there was never a week when the team had the same players and the same rotation taking the court for any stretch of matches.

They closed it all out this past week with four matches over the final five days and despite the run of bad luck all season long, the Titans still did not get down for the last run of matches.

“The energy was really good and they came ready to practice,” says Abbott.

That energy carried into the first of their final four matches when they faced the Gunnison Cowboys on Tuesday, October 26.

The Titans opened the match winning the first set 25-21 but fell in the second set 25-15. They got even further behind in the match losing the third set 25-20 but still never got down on themselves sticking to what they worked on the past week in practices.

“They did a good job of executing the game plan in the first two sets,” says Abbott.

Facing a match loss, Crested Butte rallied in the fourth set to win 25-23 and force a fifth and final set. But, the team strayed from what worked during the previous four sets and fell in the fifth set to lose the match.

“I was really proud of how we fought back in the fourth set,” says Abbott. “I think we got over-excited and got away from the game plan in the fifth set. All of the adrenaline got to us.”

Abbott was especially proud of the effort of Sami Lakoski and the serving by the team as a whole.

“Sami wasn’t feeling her best but she did a great job of reading the court with aggressive contacts on the ball,” says Abbott. “And our serving was really aggressive across the board.”

Once again though, just as they were finding their rhythm with their latest rotation, the Titans got thrown into disarray heading into the final three matches at a tournament in Gunnison on Saturday.

“We were down a player so I had to change things once again,” says Abbott.

Abbott also used the tournament as a chance to get some players more time on the court who saw limited action throughout the season. And while they lost all three matches, Abbott was still happy with the day as a whole.

“I still think it was a fun way to end the season,” says Abbott. “And we did a good job of playing to our level and staying at that level.”
One main takeaway for Abbott and the team from the season was their grit.

“One of the main positives on the season was our ability to keep fighting,” says Abbott. “We didn’t want to give up and took sets from teams no one expected us to take.”