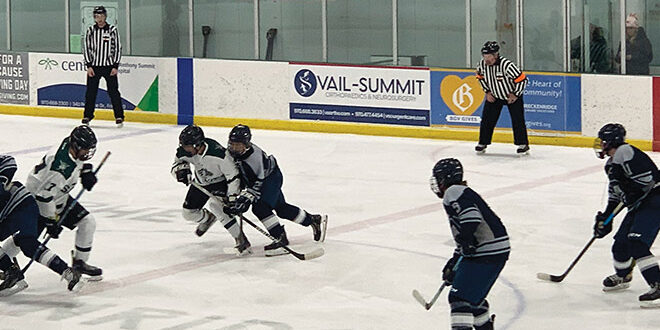 “The kids are carrying good momentum”

The Crested Butte Titans hockey team got back on track heading into the holiday break with a 5-2 win over Summit High School two weeks ago followed by a 2-1 win over Front Range private school Colorado Academy on Tuesday, December 21.

After dropping their first three games of the season, the Titans got their first win of the season against Summit building some confidence for the players as they prepared to face Colorado Academy.

“The kids got a taste of a win and they liked it,” says coach Billy Watson. They played the top two teams at the start of the season tough and they’re learning they are a good team and that confidence showed.”

Some confusion over the game’s start time left Crested Butte 10 minutes to prepare for the game but Watson felt the quick turn around at the rink actually worked out for the Titans.

“They had a long bus ride to think about the game so I think, in a way, it was the best thing for us,” says Watson.

Any showdown with a top-flight team starts with the goaltender and TJ Wonnacott stood between the pipes for the Titans for the game against Colorado Academy.

“Both of our goalies saw time in the playoffs last year and are ready,” says Watson. “It was nice to see TJ step up again.”

“They were definitely a good team but we kind of shut them down,” says Watson. “It started to look like TJ was in their heads and playing big.”

Crested Butte struck first in the sixth minute of the first period when Jack Lambert scored and the Titans did a great job of staying out of the penalty box to keep their slim lead through the first period.

“I thought that was our best first period of the entire season,” says Watson.

They continued to set the tone for the game in the second period and after killing off two penalties in the opening five minutes, Crested Butte went back to work at even strength and Lambert scored a second goal off an assist from Sam Dukeman for a 2-0 Titans’ lead by the close of the second period.

“I thought our support was way better in the offensive zone and we were doing the little things right,” says Watson. “We supported well, moved our feet, were possessing the puck and winning the battles. It was really good to see our systems come together.”

Up 2-0 against Colorado Academy did produce some nerves for the Titans in the third period. They suffered a couple stints of puck chasing and Colorado Academy took advantage to score and pull within one goal of Crested Butte.

“There was a little sense of panic,” says Watson. “We were running around a little bit in our D zone and that’s what led to the goal.”

The game came to a frantic finish as Colorado Academy looked to press for the game-tying goal. Wonnacott made the needed saves down the stretch and the Titans held on for the 2-1 win. Wonnacott finished the night stopping 26 of 27 shots.

“The difference was three blocked shots by Sam Dukeman on the final shift and TJ made some great saves,” says Watson. “I still think we could have played a better third period though.”

While the Titans enter the holiday break on fire, high school athletics rules prevent coaches from having any required practices during the time off. Fortunately, Watson was able to secure some ice time for the players to have some optional practices to keep the momentum going.

“I think the kids will be there,” says Watson. “We talked about dedication and buying in.”

The Titans return to action when they head back to Denver to face Centaurus on Friday, January 7 and then a rematch with Colorado Academy on Saturday, January 8. Their next home game is not until January 26.

“I think those will be some good games,” says Watson. “The kids are carrying good momentum.”