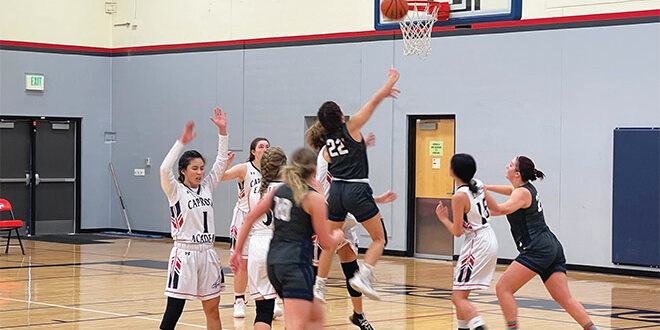 “We battled, we fought”

The Crested Butte Titans girls basketball team wrapped up preseason workouts last week and put their training to the test when they headed to Grand Junction Friday and Saturday, December 3-4 to face Plateau Valley and Caprock Academy.

“The team walked into the gym every practice with focus and determination,” says coach Amanda Reynolds. “They understand how much there is to learn and improve and they are 100-percent committed to the process.”

The weekend opened against the Plateau Valley Pirates and the Titans ran into a stout opponent to open the season. Plateau Valley is on par with some of the top teams in the Titans’ league and they ran away from Crested Butte to take the Titans down 55-10.

“We played in a panic which really is a product of early in the season, inexperienced play and a team who cares very, very much,” says Reynolds. “I believe our team walked out of that experience by raising their expectations of who we face almost every game.”

Reynolds got the team together the following morning for some shooting and to make a few adjustments as they prepared for their match up with Caprock Academy later that day.

The regroup proved fortuitous as the Titans came into the Caprock game rejuvenated and ready to step up their game from the opening tip off. The Titans finished the first quarter down 9-6 but outscored Caprock in the second quarter 11-9 to go into halftime just one point down.

Crested Butte had some chances in the third quarter to do further damage but efforts were stifled by miscues and they entered the fourth quarter down 29-28.

“There were opportunities to ride a momentum in our favor and pull ahead but we would end up hurting ourselves with turnovers,” says Reynolds.

Caprock ultimately put the Titans away outscoring Crested Butte 13-7 down the stretch to leave the Titans with a 42-35 loss. Junior Blakeley Reynolds led all players with 27 points with sophomore Leigh Harpel dropping in an additional five points.

“I would like to see our mindset change to we are a team who scores, who wins, who believes no matter who we are playing we can be and should be in a position to win in the last few minutes,” says Reynolds. “We had some critical turnovers in the last few minutes but we also had must have buckets. We battled, we fought. I, as a coach, can lose a game in the manner we lost that one.”

And while the Titans fell short of hopes to open the season with a win, the team took steps in the right direction to build on for their upcoming games. The girls remain on the road this week as they face Ridgway and Ignacio on Friday and Saturday, December 10-11.

“I think both individually and collectively we are beginning to understand our true strength,” says Reynolds.