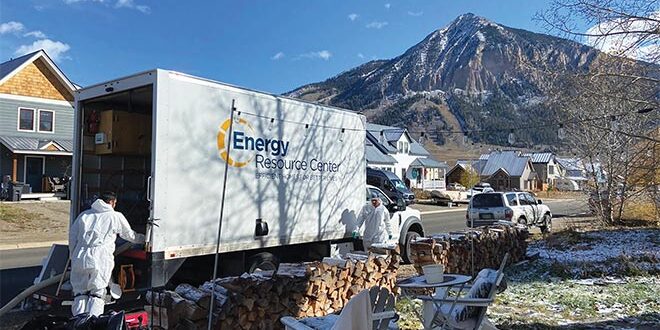 Patty Zishka and Cara Stiles own property in Crested Butte on Whiterock Avenue with two houses on the lot. They rent the larger of the two to a local couple and their 7-month-old baby. The home is basically an old miner’s cabin and to say it was not very energy efficient is probably an understatement. So Zishka and Stiles engaged with the new GreenDeed program run by the town and the Gunnison Valley Regional Housing Authority’s GV-HEAT (Gunnison Valley-Home Energy Advancement Team).

As part of the Crested Butte Climate Action Plan (CAP) the effort was started earlier this year to weatherize and increase energy efficiency in deed-restricted properties located in town. The “GreenDeed” program kicked off last February with more than $30,000 allocated to the program.

GreenDeed was supposed to focus on seven homes that were weatherized and included a mix of single-family homes, duplexes, accessory dwelling units, mobile homes and condos. That was stretched to 12 structures when more grant money became available.

GV-Heat coordinator Gesa Michel said that the units were chosen on a first come-first served basis.

Zishka and Stiles missed the first round of houses to be included in the program but lucked out when there was some additional money available from the grants.

“I saw an announcement in the Crested Butte News looking for applications for the GreenDeed energy program,” Zishka said. ”It was a simple process and included making a $50 payment for the application so we did it. I was contacted by Gesa Michel a couple of months ago when she noted that she had some money left in the grant to work on one more property and we were next in line!”

An energy audit was done on the old miner’s cabin and the report showed major issues with the house in terms of heating and insulation.
Zishka said she worked with Michel and major improvements were implemented.

“About 10 days later, Gesa showed up with a crew of guys who made all the improvements in one day,” recalled Zishka. “That included, I believe, eight storm windows to go on the front of the house, blocking air leaks along the baseboards all the way around the house, putting insulation on the hot water heater, putting in LED bulbs all over the house. They also replaced the old thermostat and installed good seals around the doors. This was all done with no cost to us.”

The crew also recommended insulating the attic and the walls. But Zishka said the cost of that would have been around $9,000 and she didn’t have the money to put out right then for that. They also suggested getting a new Energy Star refrigerator but that was going to be another $1,600.

“We paid nothing for the work that the GreenDeed crew did for us,” she said. “And almost immediately the tenants described the house as feeling warmer. We were quite inspired by their work and plan on replacing the refrigerator and putting in insulation as we can afford it. We have not seen the utility bill, but I would bet it is less.”

It’s about being affordable and comfortable
Michel said such success stories are inspiring and not unusual as the work takes place. “The households have been chosen by the order they have submitted their enrollment when we opened up the program to eligible households in February 2021,” Michel explained. “After making sure their deed-restriction is in order, we contacted the participants to schedule an energy assessment, going down the list. We were able to stretch the funding in 2021 due to additional funding from GCEA and rebates from Tri-State, so that instead of the original goal of 7 homes we were able to address 12 homes in 2021.”

Michel said the driving mission is to provide free energy assessments and upgrades for deed restricted homes in Crested Butte. The purpose is to not only drive increased energy efficiency in the town’s building stock but also ensure local residents remain affordable and comfortable.

Crested Butte planner Mel Yemma said the program has already had a significant impact. “We are pleased with the first year of the GreenDeed program and its impact. We identified this type of program in the Town’s Climate Action Plan as a way to not only increase the presence of GV-HEAT in the Town of Crested Butte to drive down energy reductions in our existing building stock, but also as a way to work on keeping our deed restricted housing inventory affordable for our community members,” she said. “Reducing energy usage in our existing buildings is a challenging nut to crack, but an essential part of our climate action strategy. We are so excited by the support, interest and participation in the first year of the GreenDeed program and look forward to continuing and growing the program.”

According to a summary report to the Crested Butte town council, on average $3,250 was invested per household on energy assessment and energy efficiency improvements. The best return on investment made in each home was replacing lightbulbs with LED replacements. Ten homes received air-sealing measures to reduce air leakage, which reduced the natural air exchange by an average of 16 percent.
Other energy saving measures included attic insulation (three homes), water heater insulation, programmable thermostats, floor or bellyboard insulation, low flow sink aerators and new storm windows. Half of the participating homes received a new refrigerator. A new refrigerator replacing one older than seven years old is expected to save about $85 in annual energy costs due to compressor improvements.

Saving real bucks
Projected annual energy savings per home ranged from $8 to $682. “On average, the participating homes are projected to save $300 annually on their utility bills, a major savings in a household’s annual expenditure,” the report stated. “The average payback achieved in about 10 years.”

“This is an income qualified program paid for by state funding, where applicants need to earn 80-percent AMI (Area Median Income) or less. I had fielded a few of the homes that originally had applied for GreenDeed and four households qualified and were approved through CARE,” she said. “We were able to serve them through this funding method. The assessment and retrofit process is very similar to the GreenDeed process and the type of improvements exactly the same, like air sealing, insulation upgrades, LED replacements, etc.”

The town and GV-Heat plan to continue the program into 2022 with weatherizing another 12 homes. There are currently 18 homes on the waiting list.

“From our past experience we decided to address another 12 homes in 2022,” said Michel. “I am already in contact with these next 12 homes on the waitlist and we will be doing the energy assessments in the beginning of the year, probably sometime in February.”
The town had budgeted $30,000 for the program in 2021 while Gunnison County Electric Association added $7,000. An additional $5,000 was recycled into the program through equipment rebates from the Tri-State Generation and Transmission Association.
Yemma said the GreenDeed team would also evaluate opportunities to consider growing the program regionally across the Gunnison Valley. “We are planning to stay at the current budget of $30,000 for 2022, but hope to discuss ways to grow the program both within Crested Butte and regionally next year,” she concluded.

Zishka said if her experience is any guide, the program should be expanded beyond Crested Butte. “I absolutely would recommend this wonderful program to anyone who qualifies,” she concluded. “It really helps use less energy.”