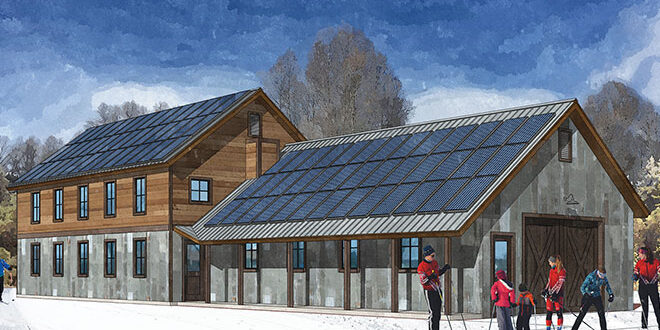 Nordic expansion plans under way and money being raised

The new hockey changing rooms used for the first time last winter at Big Mine Ice arena were a resounding hit as hockey players from ages six to 66 were able to change into and out of their gear in the comfort of the new facility. Even before COVID shut down the Warming House for the year, that facility had gotten uncomfortably crowded as it was being shared between the hockey and Nordic communities.

“The new hockey changing rooms were a huge success and very much needed,” said Crested Butte Parks, Recreation, Trails and Open Space director Janna Hansen. “With the closure of the Warming House due to COVID, the changing rooms were a critical component for the hockey program last winter. All four rooms were at maximum capacity during every hockey practice and games. CB Nordic utilized them as a place for ice skate renters to lace up, and the general public used them during open skate times.

“People were very grateful,” Hansen continued. “The prospect of changing for hockey, even just putting on ice skates, in sub-zero temperatures was daunting for people; particularly parents of small children.”

She considers the new changing rooms a great investment for the town and positive movement in the Big Mine Park Master Plan process. “This need has been identified since the roof was built over the rink in 2012,” Hansen explained. “This need was very much on Council’s mind in 2014 when both the Mt. Crested Butte and Crested Butte town councils dedicated $300,000 of the $500,000 from Whatever USA to meet the needs of Hockey and Nordic at Big Mine Park. A major focus of the 2015 Big Mine Park Master Plan was the construction of changing rooms to accommodate hockey and alleviate overcrowding of the Warming House.”

Next up – A Nordic expansion
The new changing rooms however are not the ultimate fix for the Big Mine campus. Crested Butte Nordic is now moving ahead through fundraising efforts to construct an addition off the back of the current Nordic Cat Barn that will be known as the CB Nordic Outpost.

According to CB Nordic executive director Christie Hicks, “the Outpost will house the Junior Programs on the first floor, with a training space, locker rooms, bathrooms, coach’s office, waxing space and storage. This space will also be utilized by our Masters Community Programs, ski school programs and during events as a staging/meeting area.”

Hicks said the second floor will house the administrative offices for CB Nordic. CB Nordic’s public-facing operations, such as ski rental, pass sales and retail merchandise will continue to operate out of the Warming House. “Moving some of the programmatic elements out of the Warming House will allow the current Warming House to function better,” she explained. “It will free up space for multiple public uses and a better user experience. It will also set the stage for easier renovations to the Warming House in the future.”

The Outpost has been approved by the Board of Zoning and Architectural Review (BOZAR) and has engineer-stamped plans. CB Nordic expects the total cost to be around $1.4 millon. CB Nordic has begun fundraising for the project, and they are currently accepting private donations with the hope of breaking ground in the spring of 2023.

Hansen said the 2015 Big Mine Park Master Plan identified facility expansion needs for both hockey and Nordic programming. She said the hockey changing rooms project has partially met that need, however space constraints are still a concern at the Warming House.

Dispersing the use
“CB Nordic has grown exponentially in the past few years and the Outpost project will move junior program participants and office staff out of the Warming House thereby creating much needed additional space for rental operations, general Warming House uses, and hockey viewing,” she said. “The concentration of winter use at Big Mine Park can be overwhelming and the construction of additional facilities will disperse use and ease overcrowding at the Warming House for all park users.

Hansen said the Warming House would continue to be the public amenity that it currently is but more functional and spacious. “The Outpost project will free up the entire second floor where offices are currently located,” she explained. “That space could be used for indoor hockey viewing, as a lounge space for CB Nordic and general park users, as a meeting space for hockey referees and coaches, and a multitude of other uses that are currently not available at Big Mine Park.”

The Big Mine Warming House was built in 1993. Over the decades, both the hockey and Nordic communities began utilizing the facility which was renovated several times. A design to build a major expansion was drawn up but cost estimates came in at more than $5 million. The town, CB Nordic and West Elk Hockey Association all agreed that was too much money to spend and in 2018 stepped away from considering a massive warming house structure. The hockey changing rooms were part of a plan that involved several pieces to accommodate the new growth being seen by the recreation programs.

Then came the coronavirus and the Warming House was essentially closed to the public. Hicks explained that CB Nordic staff helped customers last winter by going outside to greet them, or skiers used pick-up windows by the front door. All programs — including lessons, Junior Team and Masters — were staged outside. In addition to moving skis, boots and poles outside for kids programs, the participants had to change clothes at school or in cars. Meanwhile, Hicks said that the Warming House is filled “tip to tail with equipment. The need for expanded facilities has never been more pressing.”

“While it has taken over a decade of planning and working with our community, CB Nordic and the Town of Crested Butte are thrilled to be moving Big Mine Park forward,” Hicks concluded. “Much work has already been done to lay the ground-work for our current projects, such as gathering community input, upgrading utilities and building the Changing Rooms. The next step is to provide a home for CB Nordic’s programs so that the Warming House can better serve the whole public. It is exciting to see these plans beginning to come to fruition.”

The Big Mine Park Master Plan, that includes a skate park renovation in 2022, can be found online at www.townofcrestedbutte.com under the ”Projects” tab.

County primary election goes off without a hitch