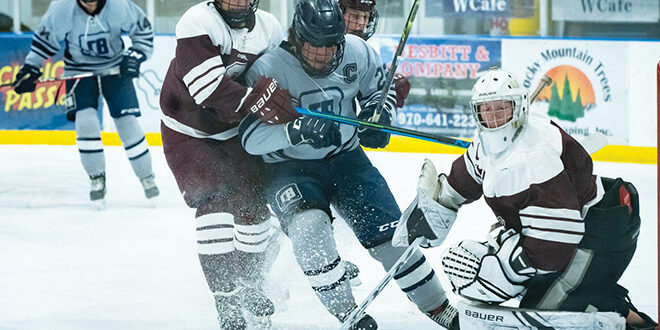 “It set the bar of where we want to be”

It was a tough draw for an opening game but the Crested Butte Titans hockey team stepped up to the challenge and while they fell short in the end, it wasn’t from a lack of effort.

The Titans lost a lot of players from their team last year. A team that went undefeated, won their league and made it all the way to the 4A state championship game.

“We only have five returners this year that saw varsity time last year,” says coach Billy Watson. “Three that really played, so we’re a young team.”

It just so happens that Cheyenne Mountain is the same team the Titans knocked out of the state tournament in the semifinals last year. Not only that, but they have a legacy as one of the most successful high school hockey programs in the state and were ranked second in preseason polls.

So, for a young team to start off a season with an opponent like that can be quite a wake-up call.

“All in all Cheyenne Mountain is a very good team and being a young team like us, you just give it your best shot,” says Watson.

Ultimately, the Titans did that and a bit more. Crested Butte opened the scoring in the seventh minute when Jack Lambert skated to net to fire a shot. The Cheyenne Mountain goalie made the initial save but Lambert corralled his own rebound and slipped it near post for a 1-0 lead.

Titan goalie Jack Perkins came up with several big saves early on to keep the Titans in the lead but continued pressure from Cheyenne Mountain eventually paid off as they scored two goals in the final five minutes of the first period to pull ahead 2-1.

The Titans opened the second period on a power play but when Cheyenne Mountain caught them off guard to score a short-handed goal, the game teetered on falling apart.

Remarkably though, the Titans climbed back into the game as some defensive work from Blue Gardner set up Lambert with the puck along the boards. The Cheyenne Mountain defenseman fell down and Lambert skated by him and onto goal to score bringing life back to the Titans attack.

Cheyenne Mountain responded to rebuild their two-goal advantage three minutes later but the Titans answered back three minutes later on a power play when Cael Medina skated end-to-end and picked the far corner with his shot to go into the third period down 4-3.

“We could have easily just laid down,” says Watson. “But seeing our young team fight back like that was great to see.”
They built off of that energy at the start of the third period. After killing off a penalty, the Titans tied the game midway through the third period when Sam Dukeman poked in a loose puck off Lambert’s shot.

Cheyenne Mountain came right back a minute later to retake the lead but Perkins came through again with some big saves and the Titans were set to tie the game back up with a powerplay and their goalie pulled.

Unfortunately, Cheyenne Mountain had the final say as they slipped in an empty net goal to seal the 6-4 win.

“The guys were bummed but we told them to be proud of that game,” says Watson. “It was a great first game to play a team like Cheyenne Mountain. It set the bar of where we want to be. All of the guys are really motivated to work hard.”

The Titans remain at home this weekend as they will host the Steamboat Sailors on Friday, December 10 at 6:45 p.m. and then again on Saturday, December 11 at 6 p.m.