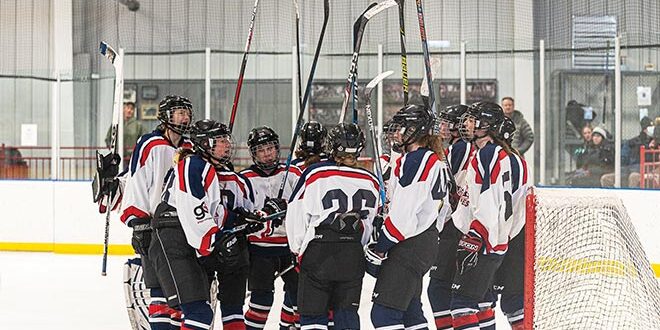 “No team is out of reach I feel”

The West Elk Hockey (WEHA) Wolverines u19 girls team won two of four home games over the weekend and have now moved up into third place in the league standings.

They opened the weekend with games against the Summit Lightning and the Colorado 14ers on Saturday, January 22 and finished the day with two wins as they took down the Lightning 2-1 Saturday morning and then skated to a 2-0 win over the 14ers that afternoon.

Nicola Roberts put the Wolverines on the board first against the Lightning in the second period but Summit tied it up until Roberts scored on a powerplay in the third period for the 2-1 win. Wolverines’ goalie Reilly Seward finished the game with 11 saves.

The Wolverines returned to the ice later that day to face the 14ers. After an erratic opening stretch, the Wolverines settled down and started moving the puck better resulting in goals from Ellie Waters and Kathryn Frey for a 2-0 lead in the first period.

The Wolverines then stepped up their puck pressure in the second period to throw the 14ers off-balance and with Seward making a number of big saves, the Wolverines finished with the 2-0 win. Seward had 16 saves in the game.

“That was a good start to the weekend,” says coach Alex Stefan.

They looked to carry the momentum from the two wins into some big matchups on Sunday as they faced second place Steamboat Springs in the morning and then the league leading Aspen Leafs Sunday afternoon.

The Wolverines opened a 2-0 lead against Steamboat on goals from Gabi Silva and carried their energy through the entire first period.

But the pressure of holding a lead against the second place team in the league soon took its toll on the team and Steamboat started picking away at WEHA. Steamboat came back in the second period to score three and added three more goals in the third period to pull ahead 6-2. The Wolverines finished with one last goal by Frey but that was it as they fell 6-3. Seward had a busy game with 34 saves.

“We got out to an early lead and relaxed a bit and when the game started to get away, we couldn’t claw back,” says Stefan. “I think it was a hard loss for the girls.”

WEHA wrapped up the four-game home stand against the Aspen Leafs who is sitting at the top of the league standings. WEHA opened the game strong including killing off two penalties to hold a 0-0 tie after one period of play.

“I don’t know what it is but our girls go out and give everything they have whenever they play Aspen,” says Stefan.

“As soon as Aspen scored, the girls really picked it up and scored two great goals,” says Stefan.

With the defense lines of Roberts and Zoe Koch switching out with Annie Collins and Elizabeth Brethauer and both lines strong in front of the Wolverines’ net, the ingredients were there for a Wolverines’ upset win, but Aspen picked up the pressure in the third period. In addition, the late game on the outside rink had Seward looking into the sun in the third period.

“You can only do so much when you can’t really see the puck,” says Stefan. “She stood on her head all weekend.”

Aspen tied the game on a powerplay four minutes into the third period and then took a 3-2 lead with just over two minutes left to play.

The Wolverines eventually pulled their goalie looking to tie the game but struggled to find the net one last time falling short of the upset win 3-2.

“That Steamboat game is going to sting a little bit for a while but they went out in the Aspen game and played phenomenally,” says Stefan. “Their integrity blows my mind.”

The Wolverines finish the regular season back on the road with four games in Aspen Saturday and Sunday, February 5-6 and then it’s on to the playoffs.

“We got some unfinished business,” says Stefan. “No team is out of reach I feel.”