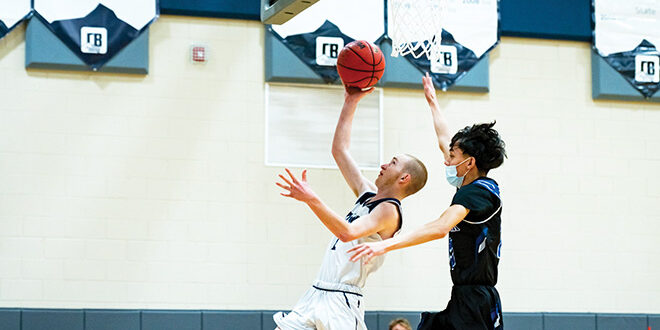 “It was focus and desire and the will to win”

What a week for the Crested Butte Titans boys basketball team as they racked up three wins over five days to improve to 9-7 on the season and are sitting in second place in the 2A Southern Peaks league standings with a league record of 5-1.

“That was a massive week for us,” says coach Hannes Gehring.

It all started at home in mighty Mt. Olympus on Tuesday, February 8 as the Titans rolled to a 57-41 win over the Center Vikings. With such a limited home schedule the Titans were amped up for the league showdown and after a somewhat slow first quarter, the Titans outscored Center 18-2 in the second quarter to build a 28-9 lead at halftime.

“We did come out a little flat but I wanted to involve as many guys as I could early to help build the team up,” says Gehring. “We asserted ourselves for sure in the second quarter.”

Gehring credits part of the swing in momentum to a change to their defensive strategy during a timeout early in the second quarter. Once that adjustment took hold, not only did it propel the Titans to the win, but also it set them up for potential success in the post season.

“We added ball pressure and started to deny passes to the wing and that’s when the kids started making plays,” explains Gehring. “It was an awesome discovery that it’s something we can start doing to other teams as well.”

Crested Butte kept the pedal mashed in the third quarter to finish up 43-19 including a buzzer-beater 14-foot jumper from Harper Smith and then closed out the 57-41 win with relative ease in the fourth. Erik Wasinger led the Titans with 22 points and Porter Washburn dropped in eight.

The Titans remained at home Friday, February 11 as they hosted the Gunnison Cowboys for Family Night. What transpired was a classic high school basketball game with a packed gym of raucous fans for both teams and a back-and-forth battle.

“Anytime you have a rivalry game it can go any way,” says Gehring. “It was so awesome to have both communities in the stands.”

Taking a page from their defensive success in the Center game, the Titans’ work to deny the wings led to a couple of steals and lay ups from Wasinger in the first quarter, but Gunnison responded accordingly.

Grayson White drained a three-pointer early in the second quarter and additional bombs from behind the arc from Ethan VanMarter and Wasinger and Ben Barney’s effort on the boards helped the Titans to a 26-21 lead by halftime.

White then went to work to open the third quarter. While the Titans’ defense kept Gunnison off balance, White rattled of six straight points and took a charge to lead Crested Butte to an eight point lead.

“We wanted to work the ball inside to Grayson or Alan and the charge he took in that moment can provide a huge momentum shift,” says Gehring.

But Gunnison pulled back into the game as they closed the third with an 8-0 run to tie the game 33-33 with one quarter left to play.

Barney came up with a big three pointer to keep the game in check for the Titans and when Alan Prieto hit a subsequent three pointer after a Crested Butte timeout, the momentum started swinging in the Titans’ favor. The Titans then broke Gunnison’s press for an easy bucket from White and a steal and lay up by Wasinger had the Titans up 45-37 with 1:31 on the clock.

“Those two threes were big blows to Gunnison’s morale and put us in the driver’s seat,” says Gehring.

Gunnison fouled Crested Butte down the stretch to send them to the line and the Titans hit four of five free throws down the stretch to finish it off for good 49-43. Wasinger led the team with 16 points, White scored 12 and several other players chipped in throughout the game.

“One of the reasons we sealed that win was late game execution,” says Gehring.

The effort Friday night had Crested Butte a bit depleted the next day as they hit the road to play Monte Vista.

“We came out exactly how I expected us to come out,” says Gehring. “Our legs just looked shot.”

Monte Vista’s quickness overwhelmed Crested Butte at times but the Titans dug deep and the game changed leads numerous times. In the end, Wasinger’s 27 points, the team shooting 24-for-28 from the free throw line and team defense helped Crested Butte to a 50-46 win.

“It was focus and desire and the will to win,” says Gehring. “It was a massive game and it’s a great sign for the playoffs where our guys need to keep their composure and win back-to-back games.”

The Titans close out the regular season with a game on the road against Custer County on Friday, February 18 and then host South Park on Saturday, February 19 for senior night with tip off at 5 p.m. If all goes according to plan, they will host their first round district playoff game on Tuesday, February 22.