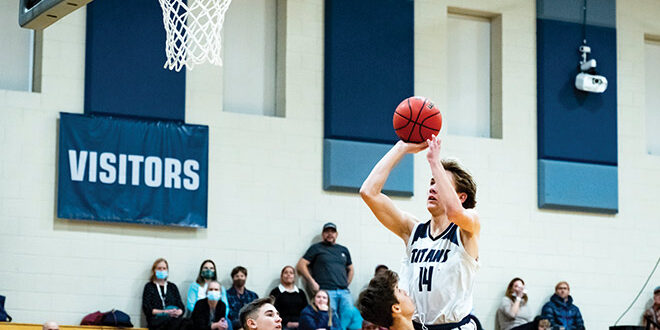 “I felt like it was a true team win”

Wins are times to celebrate, losses are opportunities to learn and the Crested Butte Titans boys basketball team got both this past week as they handed the Del Norte Tigers a 53-39 loss last week in mighty Mt. Olympus before falling 43-37 on the road to the fifth ranked Sanford Indians over the past weekend. Both games showed that the Titans are on the cusp of something big this year though and they are on the right trajectory to peak when the post season hits.

The Del Norte game was much anticipated as the Tigers brought two potent guards to the floor that could prove troublesome for Crested Butte.

“There was a lot of anticipation leading into that game,” says coach Hannes Gehring. “It’s always fun to have a challenge in front of you.”

The Titans had a plan in place starting with putting Jamis Matlock on Del Norte’s best player. Erik Wasinger, the Titans’ high scorer this season, also shifted gears to a more defensive role and Crested Butte looked to exploit Del Norte where they could.

With Alan Prieto and Grayson White getting down to business inside and the Titans defense tight, Crested Butte jumped out to an 11-2 lead to start and finished the first quarter up 15-9.

“We knew we had a size advantage inside and our big guys are really talented,” says Gehring. “I felt the boys recognized that and took advantage of that.”

Del Norte did recover in the second quarter to pull within one by the end of the first half and the two teams traded baskets to open the second half before Crested Butte started to pull away again. Ben Barney sparked the surge with four points inside and a block and when Prieto found Matlock cutting to the hoop with a pass for a lay up, the Titans were up 39-29 late in the third quarter.

“Ben was instrumental in the run we had in that third quarter,” says Gehring.

Barney, Prieto and Matlock continued their efforts on offense to open the fourth quarter while Wasinger had Del Norte’s top player locked up tight. After sitting for a spell with four fouls, White came back on the floor midway through the fourth quarter to keep the Titans’ in the driver’s seat with several rebounds on offense and defense as Crested Butte closed out the 53-39 win. Prieto finished with 23 points, White scored 19 and Barney dropped in 11 points.

“I felt like that was a true team win,” says Gehring.

The Titans then headed to face the Sanford Indians the next day with their biggest test of the season thus far. The Indians are currently ranked fifth in the state and it was becoming obvious that the league title would go to either Sanford or Crested Butte and could be determined in this very game.

“It was a huge challenge,” says Gehring. “Both teams undefeated in league, playing in their gym. It’s just exciting.”

“Erik played great in the first half,” says Gehring. “I felt good going into the second half.”

Sanford opened the second half with an 8-0 run and the game was teetering on getting away from Crested Butte, but they clawed their way back capped by a three-pointer from Harper Smith at the start of the fourth quarter.

Crested Butte forced a couple of Sanford turnovers in the final two minutes but couldn’t quite capitalize when needed and the Indians eventually escaped with a 43-37 win. Wasinger led all scorers with 20 points.

“Our defense was amazing, we just had a hard time keeping them off the offensive boards,” says Gehring. “In a game like that, it’s one or two possessions that make the difference. But, when you see the kids leave everything out on the court, the result means less. We learned how much heart this team has.”

The Titans have three games this week including a home game against Gunnison on Friday, February 11 at 7 p.m.