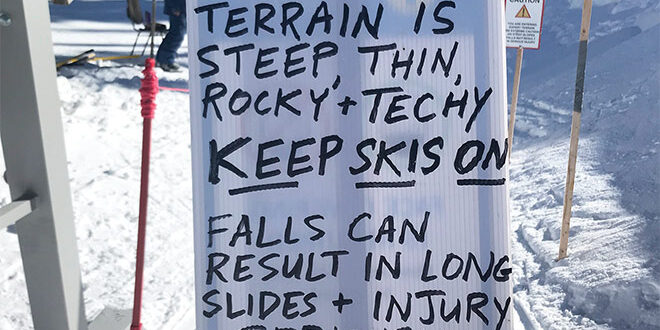 Slide for Life out there… so be careful

Since it has been several weeks since the last major snowstorm, snow conditions on the Crested Butte Mountain Resort ski hill are no longer all soft and powdery. As evidenced by warning signs all over the ski mountain so-called “slide for life” conditions are becoming prevalent. That fact resulted in several serious ski related injuries last weekend. At one point all three of the active ambulances from the North Valley were in use so the Gunnison Emergency Medical Service (EMS) was called into action to help transfer patients from the mountain clinic to the Gunnison Valley Hospital.

“The weekend was quite busy for our department,” said Crested Butte Fire Protection District EMS chief Rob Weisbaum. “We had a total of 11 calls from the GVH mountain clinic, and Gunnison EMS assisted with an additional transfer as we were managing all the concurrent calls. In addition, the crews responded to five 9-1-1 calls. It was a busy weekend.”

Gunnison Valley Health communications manager Joelle Ashley agreed with Weisbaum’s assessment. “It was a very busy weekend on the mountain with lots of ski accidents. There were people who came off the mountain on sleds and there were multiple transfers via CareFlight and our EMS ambulances to hospitals outside the county,” she explained. “On Saturday we saw 22 people at the Mountain Clinic and 21 of them were for trauma. Sunday was a little better, but there were lots of patients with trauma in the afternoon.”

Multisystem trauma is when multiple parts of the body are injured during an accident. Systems refer to organs, musculoskeletal, etc., explained Weisbaum.

Ashley said from Friday through Sunday of last week 45 patients were seen at the GVH Mountain Clinic. Of that number, 36 were people there because of injuries and not illness.

“During that same time period there were six patients who required transfer out of the valley for a higher level of care, one who was flown directly from the mountain. On Saturday, the busiest day, we had one patient flown out from Crested Butte (Buckhorn), three patients who were transported directly to the hospital emergency room, where one went directly to surgery,” she relayed. “What is really important to note about this information is that the number of people we saw was fairly typical for the busy season at the Mountain Clinic, but many of the injuries were much more serious.”

“We normally see fluctuations in the number of incidents on the mountain each day based on conditions, visitation and other factors,” Hogan explained. “We had a slight uptick in the number of incidents on Saturday, February 12, but our visitation was also higher that day, and as you noted, conditions are currently firm. Our Mountain Operations team is working hard to continue to rehab the snow we currently have and to create the best conditions possible in the areas we groom.”

“Our team did an awesome job managing all the calls,” emphasized Weisbaum. “Big thanks to our volunteers and staff who helped during the busy times and our mutual aid partners.

Hogan said it is a good time for riders on the mountain to stay aware. “As always, we emphasize the importance of skier and rider responsibility, as well as understanding your ability level and being aware of the current conditions,” concluded Hogan. “We encourage all guests to be mindful of their individual ability before choosing where to ski and ride, and our on-mountain staff are available to answer guest questions about terrain if they can be of help.”

Wednesday brought some snow and more snow is in the forecast which will hopefully soften the terrain conditions but in the meantime, ski with caution and be aware of your abilities.