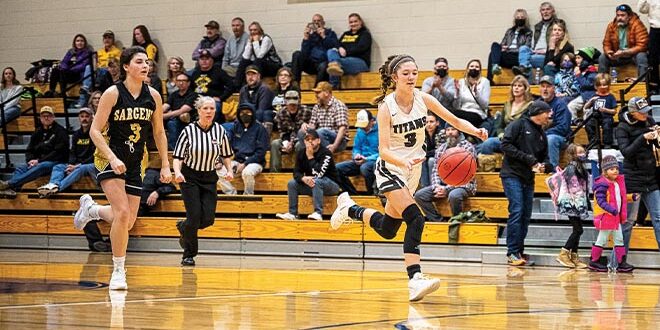 “It’s a strong equation for success”

Sure, the Crested Butte Titans girls basketball team had a tough run this past week falling to both North Fork and Sargent but the players and coaches are nowhere near to throwing in the towel as there are several things working in their favor.

With COVID rescheduling a couple of games, the Titans went a full five weeks without a game before they hit the road Tuesday, January 25 to face North Fork for a 3A non-league challenge falling 57-25.

“It was all that I expected, they’re a solid team,” says coach Amanda Reynolds.

While North Fork came out firing, the Titans stayed the course all four quarters and made the most of the situation. Blakeley Reynolds led the team with 17 points.

“After not having a game for five weeks, I was expecting us to come out sluggish but we didn’t,” says Reynolds. “We played okay and they did what I asked them to do.”

The Titans then finally got to play at home, in front of a crowd, for the first time in over two years as they hosted the Sargent Farmers on Friday, January 28. The Farmers have quite the height advantage on Crested Butte relying heavily on their post players for a majority of their offense.

The Titans were prepared with Mara Pennie, Taylor Johnson and Hayes Freeman working hard to make their top scorers’ lives difficult. And it seemed to be working at first as the Titans hung in the game during the first quarter.

Blakeley knocked down six more points, including another three-pointer, toward the end of the first half and the Titans were down 27-13, but not out.

“They’re our strong team but we made them not look as good as they are,” says Reynolds. “Our defense did what we practiced to prepare for Sargent.”

The Farmers came out in the second half with an adjustment to their offense looking to the high post rather than the low post to generate points. The Titans responded with some offense of their own as a long pass up court found Johnson open for a bucket, Freeman knocked down a 12 foot jumper and Johnson grabbed an offensive board and kicked it out to Blakeley for two more points.

The Farmers started banging on the Titans inside even more and closed the third quarter with an 18-2 run looking to bury the Titans.

“Once we adjusted to their high post, that left us vulnerable on the baseline,” explains Reynolds.

The Titans did close the quarter on a high note offering additional insight into their potential as Leigh Harpel cut back door for a baseline drive and Lexi Pickering hit a 12-foot jumper.

Despite the game being out of reach, Crested Butte kept up their energy in the fourth quarter as Harpel, Pickering, Blakeley and Pennie all continued to contribute on offense up to the final whistle of the 51-33 loss. Pickering finished the game with eight points.

“I felt like we did a great job playing defense,” says Reynolds. “I wasn’t overly thrilled with our patience on offense.”

The Titans remain in the midst of league match ups this week and Reynolds expects the team to continue building off little successes as the team returns to full strength.

“We were playing with just seven players for weeks,” says Reynolds. “Now we’re almost at full strength and we’ve got some people really coming into their own. We just need more time together on offense. It’s a strong equation for success.”

The Titans will have their second home game of the season on Tuesday, February 8 at 5:30 p.m. when they host Center.